The Black Press historically has countered disinformation that targeted Black voters, but now it is financially connected to Facebook itself. 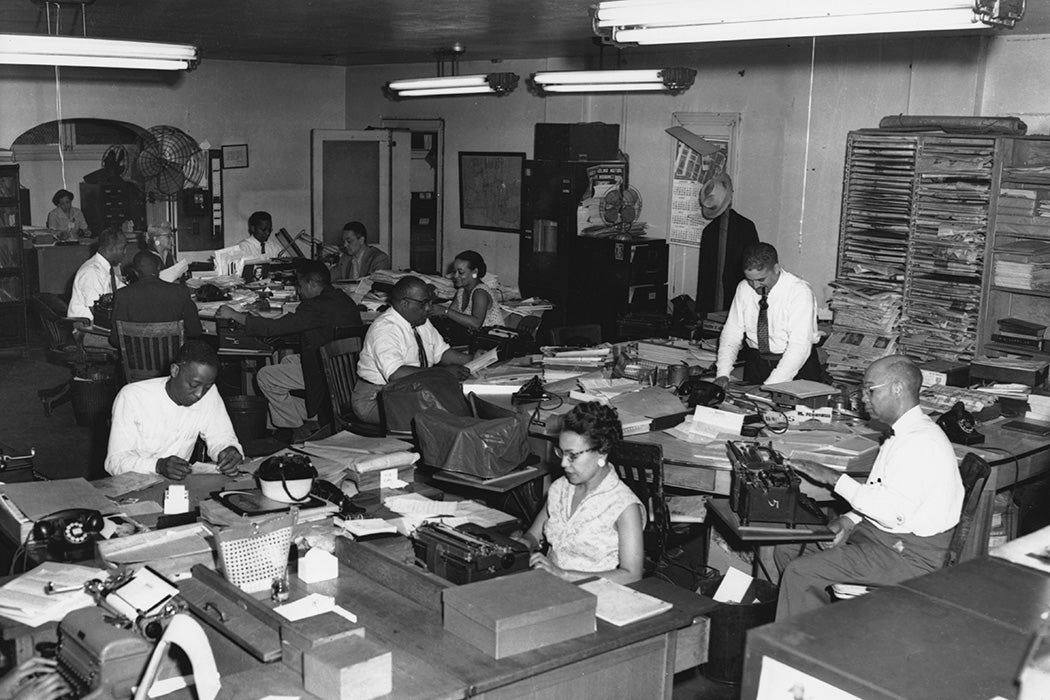 Workers at the offices of the Pittsburgh Courier newspaper, 1946. At the time the Courier was one of the top-selling African-American newspapers in the United States.
Getty
By: Kim Gallon
9 minutes
Share Tweet Email Print

In July 2019, the venerable Black newspaper the Chicago Defender announced after 114 years that it would no longer run a print edition. Legacy African American newspapers have long faced financial challenges, but the Defender’s fate proved how difficult it is for Black papers to survive in the age of online news. For much of the Black Press’ history, it has largely depended on circulation revenue, rather than advertisements, to stay in the black. When the coronavirus pandemic hit the U.S., then, the Black Press was already facing challenges staying in business. Black newspaper editors wondered how they were going to survive the economic fallout from the shutdown.

In an effort to respond to the dire straits of local journalism, Facebook awarded 15 members of the National Newspaper Publishers Association (NNPA) close to $1.3 million in grants through the Facebook Journalism Project. Black Press publishers welcomed the cash infusion. Frances Murphy Draper, the publisher and four-generation owner of the AFRO newspaper, stated:

The Facebook Grant will help the AFRO continue its 127-plus year history of uninterrupted publishing and enable us to continue our legacy as one of the nation’s most trusted voices in the African American community.

To God the glory… I am grateful to Facebook for recognizing the importance and relevance of the Black Press especially considering the threat of COVID-19 on the African-American community and on our financial stability.

The Black Press benefits from access to many of Facebook’s approximately 2.7 billion monthly active users and is motivated, like other news outlets, to put a great deal of content on the platform. Thus, even as the Black Press continues to serve the needs of customers with print copies, its largest circulation is online, and a lot of its traffic is mediated through Facebook.

Historically, relative few white companies purchased advertising in Black newspapers. While Black businesses contributed ad revenue, there were relatively few of them. Facebook, therefore, has not greatly altered nor threatened existing advertising revenue streams for Black newspapers—unlike the effect it had on white newspapers. In fact, Facebook has introduced new audiences to legacy Black newspapers. As the media scholar Kathryn Bowd argues: “news outlets’ engagement with social media is not just a way of ‘keeping up,’ but also a means of helping to ensure survival in a rapidly changing media landscape.”

Despite all of the praise for Facebook’s donation to the Black Press and other forms of local journalism, it is difficult to reconcile the company’s financial support with its dismal record on data tracking, security, and fact checking. Some critics of Facebook have also pointed out that newspapers have ceded control to social media. As the journalist Roy Greenslade noted in the Guardian: “The Facebookisation of news has the potential to destabilise democracy by, first, controlling what we read and, second, by destroying the outlets that provide that material.”

Black communities are more likely to post an image and use a hashtag to support a political cause on a social media platform than whites.

Facebook continues to report very small numbers of Black people who work in the company at all levels, particularly in leadership and technical roles. At the same time, Pew Research reports that 70 % of Black people have used Facebook at some point. This percentage is comparable to the number of whites and Hispanic communities at 70% and 69% respectively who also use the social media application. Although Facebook is the second most popular social media platform across racial and ethnic groups, according to the Pew Research Center, Black communities are more likely to post an image and use a hashtag to support a political cause on a social media platform than whites. And 8 in 10 Black people view social media as a valuable tool for amplifying social issues.

What is potentially pernicious about The Black Press’s use of Facebook to report and share news is that it may leave Black newspaper readers vulnerable to Russian-led efforts to meddle in American elections. In 2019, the Senate Select Committee on Intelligence concluded that Russians chiefly targeted Black voters in the 2016 election. According to the report, a bogus company based in St. Petersburg, Russia, known as the Internet Research Agency (IRA), engaged in a widespread campaign on Facebook and Instagram to spread disinformation—false information, spread deliberately, with an intention to mobilize a target population into some form of social action. According to the Senate report, the IRA primarily disseminated divisive and false information about race to “African-Americans in metropolitan areas with well-established black communities and flashpoints in the Black Lives Matter movement.” Much of this disinformation sought to discourage Black people from voting for Hillary Clinton, the Democratic nominee.

What we are seeing as we approach the 2020 election are new foreign campaigns to influence political behavior. A CNN investigation revealed that the Russians have created troll farms in Ghana and Nigeria, where Ghanaian and Nigerian young men are hired to post content on Facebook, along with Twitter and Instagram, that engages Black Americans around racial issues. These trolls’ goal is to incite racial tensions and sow seeds of distrust in the American electoral process.

To some extent, the use of fake Black social media profiles to spread disinformation is not surprising. Social media critics and scholars have noted the increase in trolls targeting African Americans and the rise of white people appropriating and using Black cultural signs, expressions, and symbols—a phenomenon known as digital blackface—in apps like TikTok. The film and media scholar Anna Everett, in her book, Digital Diaspora: A Race for Cyberspace, summarizes the issue by saying that Black newspapers’ migration to digital platforms make them vulnerable to “masquerading opportunists and bigots.”

How does Facebook’s mixed response to election meddling square with its support of local journalism, particularly Black newspapers? In general, Facebook has acknowledged that there are areas for improvement. And unlike 2016, the company has been much more responsive to election meddling. This past March, Facebook announced that it removed 49 Facebook accounts, 69 page, and 85 Instagram accounts that were engaging in foreign interference.

More recently, Facebook, along with Google, Twitter, and other major tech companies, met with U.S. government officials and made a joint statement that they were committed to rooting out disinformation on their respective platforms. Facebook’s head of cybersecurity policy, Nathaniel Gleicher, stated in defense of the social media giant’s resistance to removing fake or misleading political ads:

There is a lack of consensus of how serious the issue of disinformation and false political advertising is when it comes to its effect on voting behavior. The media and public affairs professor David Karpf argues that the spread of false information plays a negligible role in voting behavior. Past voting behavior and party affiliation, he notes, are far more likely to affect who a person casts their vote for in any given election.

The journalism and mass communications scholar Young Mie Kim offers a different take on the significance of disinformation online. She notes that millions of dollars are spent on digital ads that are designed to dissuade African Americans from voting. Messages carrying misinformation fell into three different categories: “deception (lying about the time, place and manner of voting); calls for boycott; and voter intimidation or threats.” Ultimately, Kim argues, these messages, “confuse a large number of voters.”

The manner in which social forces, particularly intra-racial community dynamics, shape African American political behavior may be the most powerful evidence that Black communities are particularly vulnerable to online election interference. The scholars Ismail K. White and Chryl N. Laird argue in their book Steadfast Democrats that Black Americans are remarkably unified in their support of the Democratic Party and attribute this to what they call “racialized social constraint.” Racialized social constraint is a process of enforcing consensus on issues that will inspire consistent political behavior. White and Laird argue that social pressure from other African Americans is instrumental in this process.

Racialized social constraint might also explain why there are persistent groups of African Americans who do not vote. The Black American populace have long held a considerable distrust in the United States democratic system. The scholars Timothy Vercellotti and Paul R. Brewer, writing in the Journal of Black Studies, have correlated African Americans’ distrust in the government with their alienation from white-owned media, a preference for Black media, and a belief that Black media is more trustworthy. They argue that “African American respondents who trusted government least were also more likely to favor the Black media’s version of events.”

These findings suggest that Black Americans who distrust the government may be more likely to use Facebook to read the Black Press, in turn making them more susceptible to disinformation campaigns. Moreover, “racialized social constraint” could play a role in significant numbers of Black Americans opting out of voting. What does this all mean for the Black Press and the financial support it draws from Facebook as the U.S. pproaches the 2020 election? The American public faces the prospect of not receiving the comprehensive information about the candidates—and about foreign threats to democracy.

The Black Press historically has countered disinformation and election meddling that targeted would be Black voters in efforts to discourage them from exercising their rights. In a 1909 editorial titled “Lying Prophets,” the Baltimore Afro-American challenged another newspaper’s assertion that poll taxes, literacy, and other devices were not intended to disenfranchise Black votes. The paper editorialized in response to the southern paper’s denial that the “grandfather clause,” which stated that it was a necessary for a person’s grandfather to vote on January 1, 1869, to possess the franchise, was a form of racial disenfranchisement. The paper sharply noted, “Does this not strictly apply to all white people and but a few negroes, if any?” With relatively little support and advertising from white-owned businesses and companies, the Black Press maintained a financial independence that gave them the freedom to make strident comments about African American disenfranchisement and election meddling such as this.

In today’s climate where newspapers’ fortunes are tied to Big Tech, speaking out against Facebook’s practices is extremely difficult to do. Financial donations and advertising have made it extremely difficult for Black newspapers who use Facebook to call on the company to make a greater effort to combat disinformation and Black voter suppression. To do so would possibly put a principal form of financial support in jeopardy. It will be difficult to determine what impact Facebook’s relationship to the Black Press will have on the 2020 election. Nonetheless, the Black Press’s financial connections to Facebook makes it dependent on the company’s actions. What that means for readers remains to be seen. 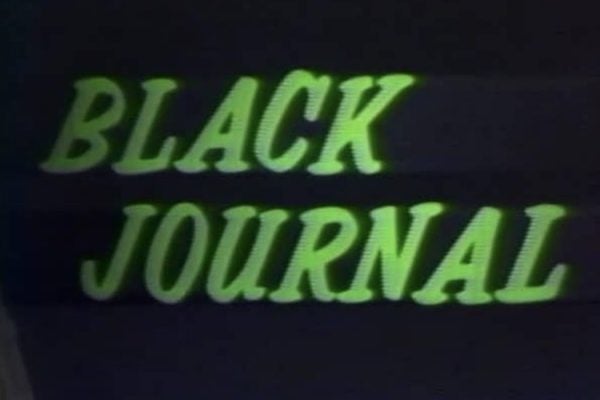