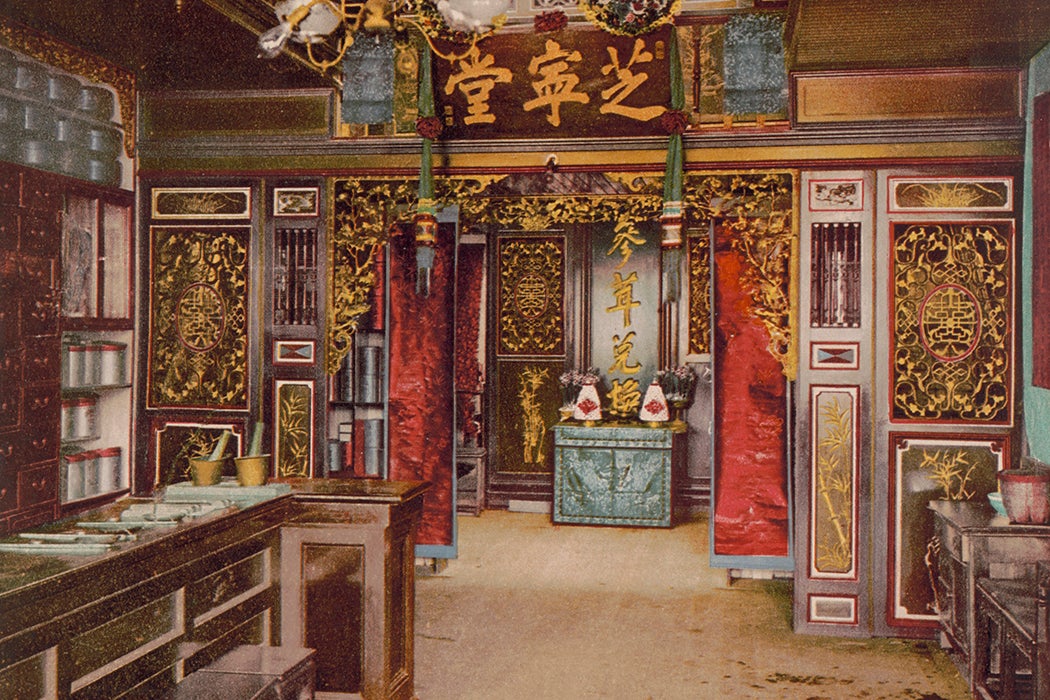 The interior of a Chinese pharmacy in Los Angeles, 1907
via Wikimedia Commons
By: Livia Gershon
3 minutes
Share Tweet Email Print

When a wave of Chinese immigrants arrived in the western United States in the mid-nineteenth century, among their number were not just prospective miners and railroad workers but trained medical professionals. Many of these professionals set up practices serving their own communities—and also white patients in their new home towns. As historian Tamara Venit Shelton explains, these doctors and pharmacists became successful in the face of anti-Chinese stereotypes and attacks by the mainstream medical profession, partly by using the stereotypes to their own advantage.

The Chinese methods used by practitioners in the US usually focused on pulsology—diagnosing a patient based on their pulse—and herbal remedies.

The AMA was so focused on defending the boundaries of “scientific” medical practice in part because the reputation of “regular doctors” was sketchy. Many Americans associated them with risky surgery and harsh medicines and preferred cures that were closer to home remedies. Some white patients went to Chinese-American doctors after their homemade poultices failed or in the hopes of avoiding surgery proposed by a Western doctor. The Chinese methods used by practitioners in the US usually focused on pulsology—diagnosing a patient based on their pulse—and herbal remedies, which were viewed as less invasive.

Shelton writes that coverage of Chinese-American doctors and pharmacies in mainstream American newspapers often lingered on descriptions of “charred bones of lions and tigers,” “canned toads,” and other ingredients that the audience would presumably view as exotic and revolting. Yet Chinese-American practitioners often used Orientalist stereotypes to their own advantage. Many of their advertisements showed a physician in distinctly Chinese clothing. They often insisted that their cures were “natural” and “ancient”—yet also proven through modern science.

A 1902 book by Los Angeles Chinese pharmacist Li Wing, The Science of Oriental Medicine, Diet and Hygiene, played on white Americans’ beliefs about Asian barbarity. It claimed that Chinese doctors understood the human body better than American ones because they practiced vivisection on condemned criminals.

Another popular stereotype portrayed Chinese men as effeminate, something the doctors turned to their advantage by representing themselves as especially attuned to women and their ailments. Some criticized gynecological surgeries and contraceptives and suggested that traditional herbs could help protect women from “modern ways of life.”

Some practitioners also sold their services to white women with the promise that pulsology allowed for greater modesty than a Western-style physical exam. Ads for one Chinese pharmacy in Oregon featured images of white women dressed in modern upper-class fashions. Shelton notes that this is not the look of the rural women who patronized the shop, but “perhaps representations of what they aspired to be.”

Capitalizing on Orientalist stereotypes earned Chinese-American practitioners patients, but, Shelton argues, it also helped keep them confined to the margins of American society—at least until the late twentieth century, when acupuncture and herbal remedies became increasingly mainstream and even won favor with some western medical institutions.