Thanksgiving Has Been Reinvented Many Times

From colonial times to the nineteenth century, Thanksgiving was very different from the holiday we know now. 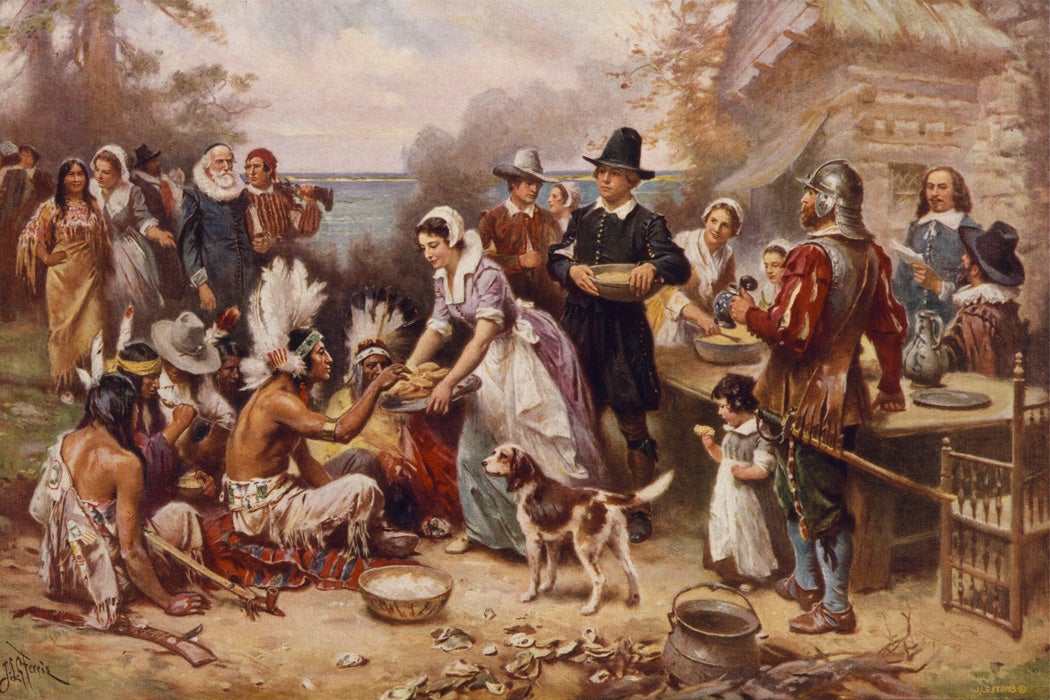 From colonial times to the nineteenth century, both Christmas and Thanksgiving were very different from the holidays we know now. They were carnivalesque: outdoors, rowdy, communal celebrations with poor children and “lower-class males demanding treats from the wealthy,” writes the historian Elizabeth Pleck. Christmas was literally and figuratively domesticated into “private celebrations of the middle class, sedate but joyful.”

Thanksgiving, too, was tamed, only this hasn’t been written about as much. The holiday was originally cooked up by magazine editor Sarah Hale. Lincoln declared it a national holiday in 1863. Protestant and middle-class, Hale’s and Lincoln’s Thanksgiving was about hearth and home, a particularly salient theme during the Civil War.

The melting pot in action meant, for instance, a pan of lasagna next to the turkey.

The celebration initially had only limited acceptance in the South, but that wasn’t the only place reluctant to go the whole turkey. The big birds were beyond the means of many. “It took a long time before Thanksgiving became beloved in all classes and regions, or amongst most homemakers,” Pleck writes. Thanksgiving, her work shows, has been reinvented again and again since Hale, changing in both form and meaning through time.

Pleck chronicles the “rise of Thanksgiving as a ‘domestic occasion’ among the antebellum middle class, the extent that poor and working-class families adopted the holiday by the early twentieth century, and the addition of new elements to the celebration by the 1930s.” During the Progressive Era, for instance, Thanksgiving was seen by elites as the perfect tool of Americanization. As a cultural affirmation of family, Thanksgiving was palatable to Catholic and Jewish immigrants. The melting pot in action meant, for instance, a pan of lasagna next to the turkey.

Mass commercialization also played a role in transforming the private family gathering of the late nineteenth century into a vital part of the twentieth century economy. Today, Thanksgiving is celebrated by economists as the beginning of the holiday shopping period.

The opening salvo of Turkey Day commercialism was the first Macy’s Thanksgiving Day Parade, in 1924. The department store has been affixed to the holiday in the national imagination ever since. The advertising parade became a tradition, replacing the earlier tradition of the Fantasticals. These were parades, too, in which working class men, often cross-dressed, clamored through the streets on Thanksgiving and other holidays. In the 1880s, elites saw them as amusing; by the turn of the twentieth century, Pleck explains, they were a threat best suppressed.

Today, the commercialization of Thanksgiving is represented by Black Friday and Cyber Monday, when shopping (in real life or online) is closely watched for signs of national economic health.

The entwining of football spectatorship and Thanksgiving is also not an accident. Pleck argues that one function of Thanksgiving football “even enjoyed vicariously, was to reaffirm men’s bonds with other men and their masculinity, to inject some manliness into the sentimentality” of a day dominated by women—and the “women’s work” of cooking, serving, and cleaning. From the 1870s, the upper classes “developed their own form of misrule in their exuberance after Thanksgiving Day football games.” At first, playing football on Thanksgiving Day was quite controversial, as were the college-boy riots that followed games. By the 1920s, however, football spectatorship had been made safe by being moved indoors. First radio and later television made football a vital part of Thanksgiving Day’s extended family.

Invented traditions like Christmas and Thanksgiving are based on “largely fictitious” history, writes Pleck. Even so, as time passes, these become traditions of their own, accruing history, even as they transform.

The Making of the Domestic Occasion: The History of Thanksgiving in the United States
By: Elizabeth Pleck
Journal of Social History, Vol. 32, No. 4 (Summer, 1999), pp. 773-789
Oxford University Press