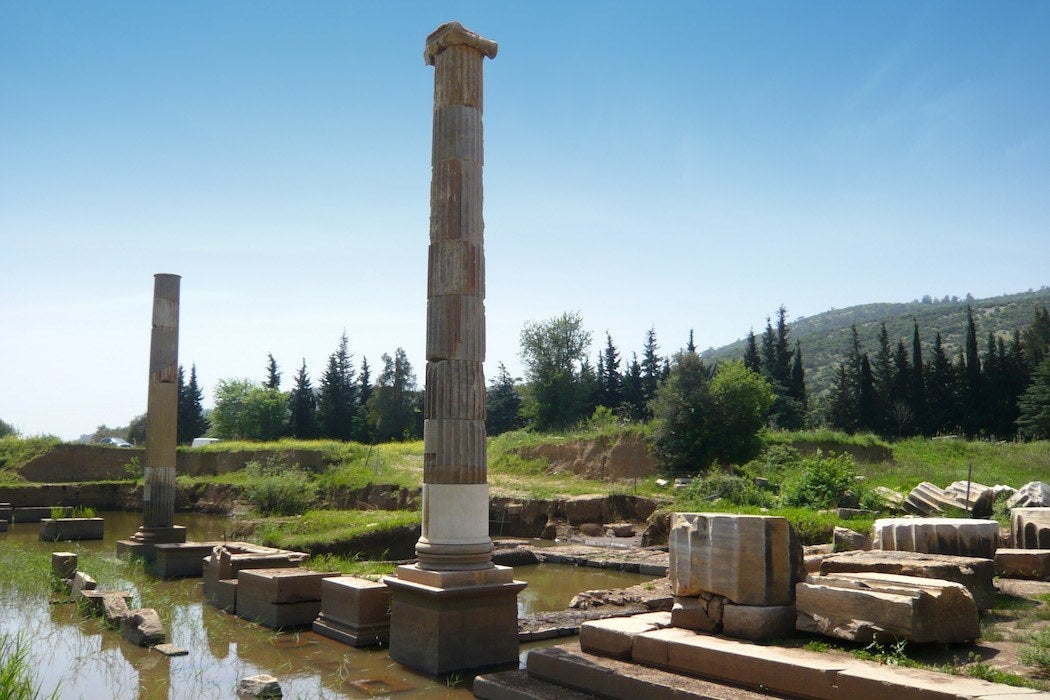 In 1993, when an archaeological survey off the coast of the Karaburun peninsula in Turkey turned up five shipwrecks, researchers could hardly begin to anticipate the secrets they’d soon recover from the seafloor. The shipwrecks of Kizilburun (“Crimson Cape”) included four boats of Byzantine or medieval origin, and a fifth from an even earlier time – the Late Hellenistic period (which began with the death of Alexander the Great, in 323 BCE, and ended with the rise of the Roman Empire, in 31 BCE).

This fifth ship was carrying basins, funeral slabs, fish plates, cooking pans, bowls, lamps, a bearded stone face (likely meant to be the ship’s protective deity), and eight huge marble drums–the components of a Doric column. This last bit of cargo proved the most valuable for scientists. For the first time ever, they were able to trace the marble of these columns to its original quarry and to its final destination, providing new insights about architecture and transportation in Ancient Greece.

But before lead researchers Deborah Carlson and Donny Hamilton could begin exploring the wreck, they had to strategically plan their mission. The ship was 150 feet underwater, making for dangerous diving conditions.

To avoid getting decompression sickness (which occurs when too much nitrogen builds up in a diver’s blood), dives were limited to 20 minutes spent with the wreck. Sometimes, Carlson told National Geographic, the work was interrupted by aquatic denizens, like a toothy moray eel. Simply moving the marble drums was a massive undertaking, considering they weighed between 6 and 7 tons. To accomplish the task, Carlson and her team attached slings to the pieces of marble and inflated underwater balloons to lift them away from the wreck to a clear, sandy space 82 feet away. From there it was a matter of measuring the exposed surfaces–large parts of the marble were encrusted by mollusks and other organisms–and creating scaled replicas in the lab.

Using a combination of isotopic and meteorological data (chemical analysis and measurements), the researchers determined that the column segments were Proconnesian marble from Marmara Island. The signature blue vines in the white stone made it highly prized, and it was used to build statues and enormous structures like the Hagia Sophia. The shipwreck contained only the top and bottom portions of the marble column, but the entire set wouldn’t have been enough to build a full one, suggesting the order from Marmara was divided between two ships.

The next piece of the puzzle was the marble’s destination. What monument would it have helped to create? Carlson researched a number of potential sites near the coast and settled on the Temple of Apollo at Claros. At the time of the shipwreck, the temple was still under construction, and columns at the site are the same diameter as those contained on the sunken ship.

The temple itself is a beautiful and priceless work of Greek history. Like its counterpart in Delphi, the temple was once home to an oracle who drank water from a sacred spring and offered predictions to visitors. According to Greek historian Pausanias, the oracle at Claros once offered guidance to Alexander the Great by interpreting one of his dreams.

Unfortunately, this temple, which contains sculptures of Apollo, Artemis, and Leto, was never entirely finished. This probably isn’t due to the Kizilburun shipwreck and an unfilled order of marble. More likely, the temple was destroyed by an earthquake or dismantled by invaders. The builder from Claros, who may have traveled all the way to Marmara Island to provided the specifications for the temple’s order, would never have seen its completion. And if he were aboard the doomed ship, he wouldn’t have even returned to Claros.

What is the Mediterranean today: a solid sea or a liquid frontier, a bridge or a barrier?

The Kizilburun shipwrecks offer us a brief glimpse into an earlier era and helps us to interpret the lives and business of those living during the Hellenistic period. But the Mediterranean Sea can also be a way of understanding the modern world, argues one scholar. It allows passage to military and mercantile vessels, borders the lands of diverse cultures, and offers recreation and food for nearby inhabitants. But it is also a point of contention, a dangerous body of water crossed by migrants and asylum-seekers. As post-colonialist Iain Chambers writes, “What is the Mediterranean today: a solid sea or a liquid frontier, a bridge or a barrier?”

As with the ships wrecked off Kizilburun hundreds and thousands of years ago, the sea offers as many dangers as it does opportunities. It offers hints and clues to the past if only we can pry open the lid; it is, at the same time, a mirror reflecting our future, with all its inherent dangers and challenges. 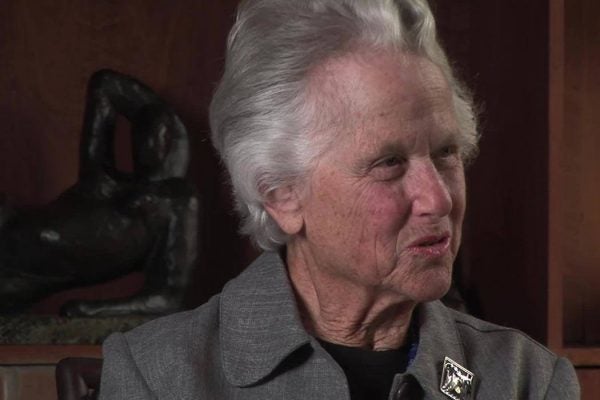 Elizabeth L. Eisenstein, who passed away this year at the age of 92, played a significant role in shaping our understanding of the print revolution.