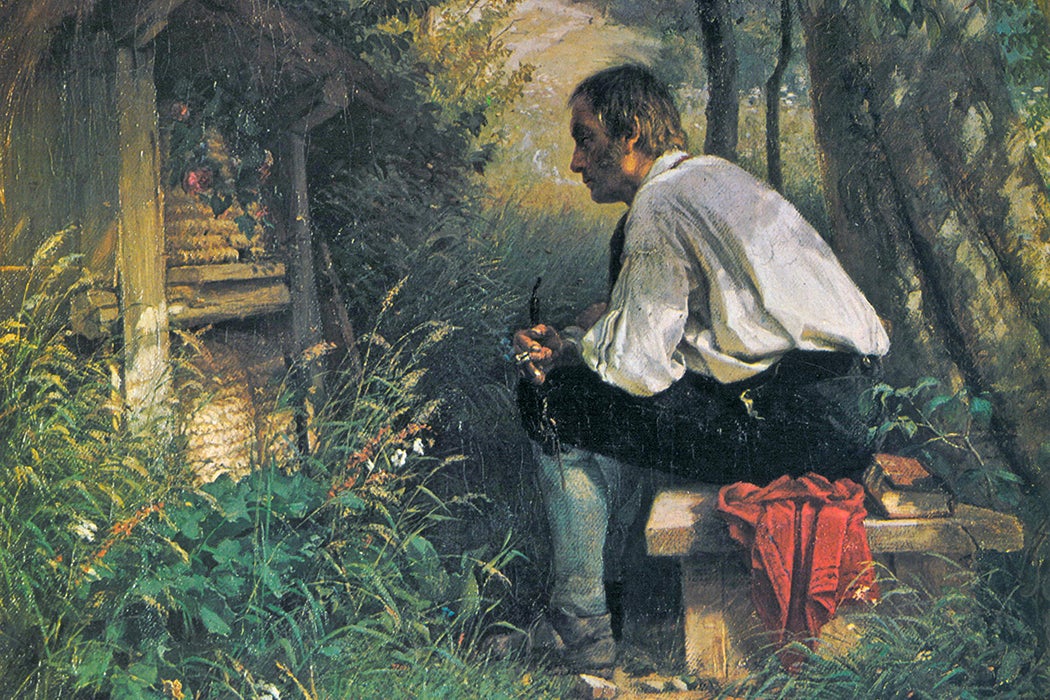 While most common in the nineteenth century, the practice of “telling the bees” about significant life events endures, albeit in a different form, to the present day. The most pervasive and affecting depiction of this tradition can be found in the New England Quaker writer John Greenleaf Whittier’s 1858 poem “Telling the Bees.”

An unnamed speaker returns to his lover’s abode after a year’s absence. He describes his previous visit there in careful detail before noting that nothing had changed, not the house or the trees, save the family beehives. The speaker’s attention is drawn to these objects by the movements of a “chore-girl small” who sings a mournful tune as she drapes the hives with “shred of black.” It is apparent from the actions of the chore-girl that something is very wrong here. This is a house in mourning, a realization that sends a wintry chill through the speaker, who then begins to listen intently to the girl’s lachrymose tune. He becomes aware that “she was telling the bees of one / Gone on the journey we all must go!”

His first thought is that his beloved’s grandfather has died, a conclusion that gives him comfort, knowing that he “sleeps / The fret and the pain of his age away.” His thoughts are then interrupted by the sound of a dog whimpering. He looks up. There, in the doorway, is the old man, his head resting on his cane, very much alive. The chore-girl continues to sing to the bees, and now he can make out what she is telling them. She sings: “Stay at home, pretty bees, fly not hence! / Mistress Mary is dead and gone!” The poem ends with this communication to the bees, foregrounding their importance in a ritual conveying human grief.

Whittier himself was eager to locate the tradition of “telling the bees” within the folklore of rural New England. When he published the poem in the Atlantic in 1858 he included an introduction to the poem where he notes that this ritual that has “formerly prevailed” was brought to America from “the Old Country.” That Whittier felt it necessary to include a note about this tradition indicates that, even in the mid-nineteen-century, the tradition of “telling the bees” was fading.

In an 1858 letter to fellow poet and Atlantic contributor Rose Terry Cooke, Whittier mentions that, following the advice of the Atlantic’s first editor, James Russell Lowell, he changed the title to “Telling the Bees” and added a verse “for the purpose of introducing this very expression.” Whittier’s comments, and his introductory note, indicate a desire to preserve this particular folkloric ritual, to educate the unaware. The emphasis that Whittier places on this concept of delivering important information to the bees implies that there is a special relationship that exists between honeybees and humans that is essential to maintain.

This practice of “telling the bees” may have its origins in Celtic mythology where the presence of a bee after a death signified the soul leaving the body, but the tradition appears to have been most prominent in the eighteenth and nineteenth centuries in the U.S. and Western Europe. The ritual involves notifying honey bees of major events in the beekeeper’s life, such as a death or marriage.

While the traditions varied from country to country, “telling the bees” always involved notifying the insects of a death in the family—so that the bees could share in the mourning. This generally entailed draping each hive with black crepe or some other “shred of black.” It was required that the sad news be delivered to each hive individually, by knocking once and then verbally relaying the tale of sorrow. 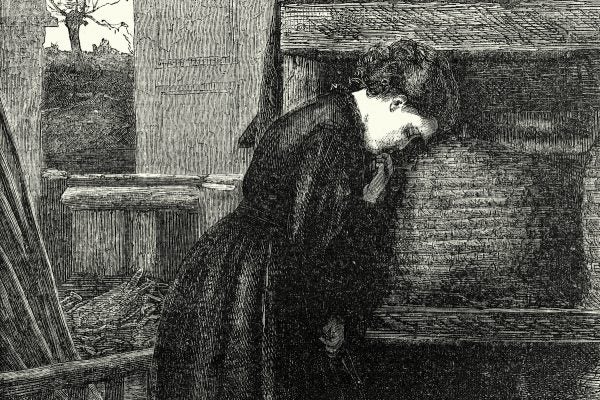 Charles Fitzgerald Gambier Jenyns, a British Victorian apiarist and rector, in his A Book about Bees (1886) asserts that this message should be delivered to the hives at midnight. In other regions, like in Whittier’s New England, they simply hung crepe on the hive and then sang to the bees that, “So-and-so is dead.” Other variations include merely telling (rather than singing) or whispering the information. In some places they may say “Little brownies, little brownies, your master (or mistress) is dead.”

Tammy Horn, a literary scholar and apiarist, writes in Bees in America: How the Honey Bee Shaped a Nation (2005) that in New Hampshire, the news of a death must not only be sung, but the verses must also rhyme. She provides a sample verse: “Bees, bees, awake! / Your master is dead, / And another you must take.” If the bees begin to buzz after this information has been delivered, it is seen as a good omen.

Horn also writes of another death custom associated with bees: that of “ricking,” a ritual that required the eldest son in the bereaved family to shift all of the hives to the right in order to signify that a change has occurred. Another take on this was to shift the hives so that their entrances faced the family home. This tended only to occur if the deceased was being waked in the home.

Unhappy events were not the only occasions that the bees were invited to participate in.

The consequences of not telling the bees could be dire. Another Victorian biologist, Margaret Warner Morley, in her book The Honey-Makers (1899), cites a case in Norfolk where a man purchased a hive of bees at an auction. When the man returned home with them, the bees appeared very sickly. It occurred to their new owner that they hadn’t been properly put into mourning after the death of their former owner. He decided to drape the hive with black cloth, and soon after he did, the bees regained their health. There are also tales of entire bee colonies dying if the family failed to notify them of a death.

Throughout the nineteenth-century and well into the twentieth, there were reports of rural people who firmly believed in this tradition of telling the bees. There is even a report of bees brought to a funeral, presumably after being told of the death. In 1956, the AP reported a strange occurrence at the funeral of John Zepka, a beekeeper from the Berkshire Hills. As the funeral procession reached the grave, the mourners discovered swarms of bees hanging placidly from the ceiling of the tent “and clinging to floral sprays. They did not annoy the mourners—just remained immobile.” According to a New York Times dispatch from Adams, MA, published on July 16, 1956: “Nothing like it had ever been seen before.” This curious case seemed to confirm the need to “tell” the bees,  further strengthening the conviction that there exists a mournful sympathy between bees and humans.

The mourning practices of this area of New England were, as nineteenth-century folklorist Pamela McArthur Cole has commented, anachronistic even in 1894. These practices included the superstition that you must touch the corpse before burial, else the departed will reappear to the mourner in a dream. Cole observes that, by 1842, only a few individuals had actually witnessed the ritual of “telling the bees.” Although Whittier’s popular ballad would not be published for another sixteen years, the tradition, while not widely practiced, had clearly taken hold in the public imagination.

Unhappy events were not the only occasions that the bees were invited to participate in. The bees were in fact so integral to human rituals that Cole notes of a wedding: “The little workers were to be informed of the event, and receive a bit of wedding cake.” The hives were sometimes adorned with flowers to celebrate the proceedings.

Today, with the bee crisis reaching alarming heights, we seem to have returned to a morbid intimacy with bees.

Morley (the Victorian biologist) observes that, in Brittany, it was traditional to decorate the hives for wedding celebrations with scarlet cloth, while in Westphalia, Germany, the newlyweds must introduce themselves to the bees or else they will have an unlucky marriage. This homage paid to the bees during nuptials could be a way of compensating the creatures for the vast amounts of honey consumed during the celebrations.

Yet it is in mourning rather that in nuptial celebrations that the tradition of telling the bees lingers. “Telling the bees” resonates in the poetry of twentieth-century confessional poet Sylvia Plath’s “bee poems,” a poetic sequence in her collection, Ariel. Plath had direct experience with beekeeping: Her father was an entomologist who specialized in bees. Shortly before her suicide, Plath began to keep bees herself. In “The Arrival of the Bee Box” (1962), she compares the “clean wood box” to a small coffin and refers to the beekeeping net as a “funeral veil,” thus drawing explicit connections between beekeeping, death, and mourning. 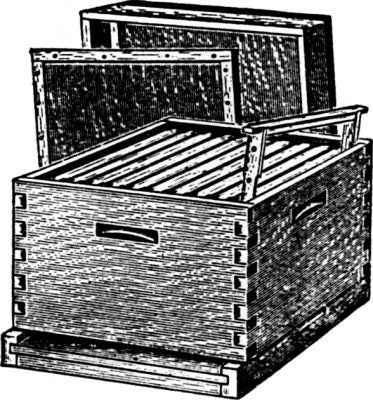 Today, with the bee crisis reaching alarming heights, we seem to have returned to a morbid intimacy with bees. In early June 2018, French beekeepers, many clad in traditional protective suits and veiled hats, held a symbolic funeral in central Paris to protest the use of pesticides that many see as being responsible for the death of thousands of honeybees. This problem is not unique to France, or even to Europe: In North America, colony collapse disorder—the name given to the phenomenon where honeybees suddenly abandon their hive—has raised alarms about the environmental implications of diminishing honey bee populations.

While many nineteenth-century commentators on the tradition of “telling the bees” speculated that the custom would die out as more information was gained about beekeeping, the mock-funeral in France attests to its legacy.

In Paris, as beekeepers hovered over gravestone-like bee boxes and coffins containing beekeeper effigies, it was unclear whether the beekeepers were mourning for the bees or for the demise of their profession. Given that bees pollinate 70 of the 100 crops that feed 90% of the world, this mourning for the bees—and for the humans that tend to them—is fitting. It is more than likely that if the bee population becomes extinct, humankind will follow close behind. While the future of the honeybee remains uncertain, this staged funeral serves as a powerful reminder that our fate is inexorably linked to that of bees. If they were to depart, the journey “we all must go” will come sooner than we realize.