The Surprising Historical Significance of Fortune-Telling

The possible futures predicted by fortune-telling happen just often enough to tantalize, preying on our deepest aspirations of catching a “big break.” 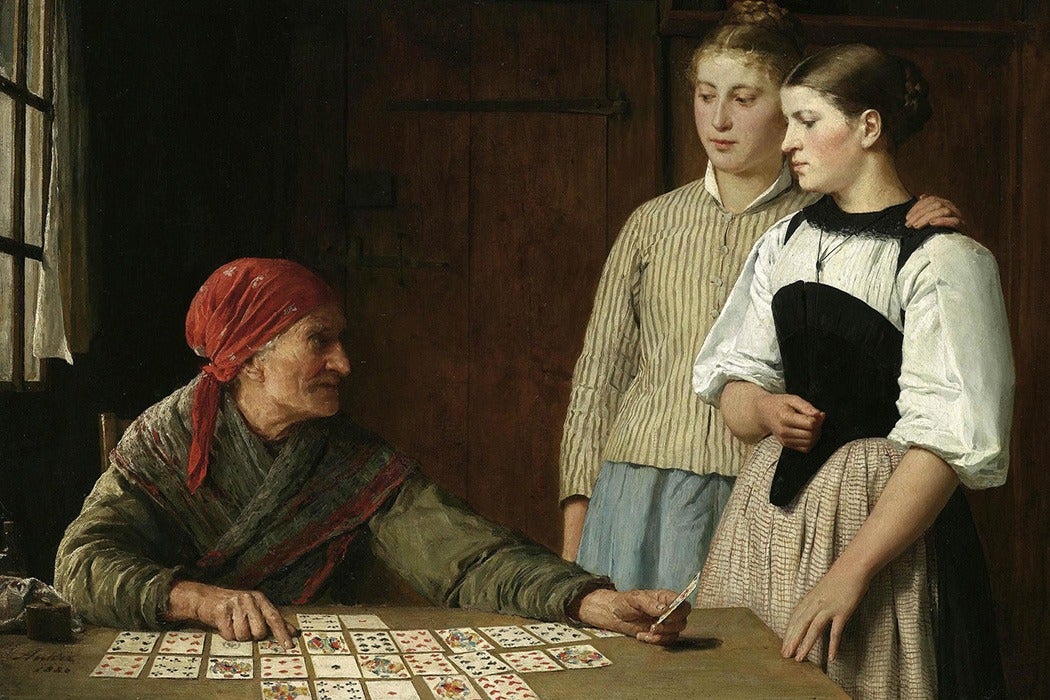 In 1786, 14-year-old Marie Anne Lenormand ran away from the convent school where she was raised. Lenormand set off to Paris on her own, where she learned the art of cartomancy—divination using a deck of cards. She worked for 40 years as a cartomancer and fortune-teller, advising Joséphine de Beauharnais (Napoleon’s wife), Robespierre, Marat, and other important figures on their fates.

Thirty years later, when Lenormand was 44 years old, she met with a young Frances, Lady Shelley, a socialite, aristocrat, and friend of the Duke of Wellington. The two met in Lenormand’s luxurious boudoir, but, as Shelley recounts in her diary, she was soon drawn into Lenormand’s cabinet d’étude to have her fortune read. Lenormand asked her date of birth, then the first letter of her name, the first letter of her birthplace, and then her favorite animal, color, and number. “After about a quarter of an hour of this mummery, during which time she had arranged all the cards in order upon the table, she made an examination of my head,” Shelley wrote. “Suddenly she began, in a sort of measured prose, and with great rapidity and distinct articulation, to describe my character and past life, in which she was so accurate and so successful, even to minute particulars, that I was spellbound at the manner in which she had discovered all she knew.”

What made Lenormand rich in eighteenth-century France—and what has made fortune-telling and games of chance mainstays of human society for more than six millennia—is that sometimes the possibility proposed by the fortune-teller is, in fact, perfectly spot-on. Sometimes what is predicted happens; sometimes our lottery ticket is the winner; sometimes we beat the odds. Games of chance point toward the correct value just often enough to keep us intrigued. In so doing, they have acted as social and political tools that play upon some of our greatest aspirations—that we’ll catch a “big break,” or that the poor can suddenly become rich. “Ability,” Napoleon famously said, “is of little account without opportunity.”

Upon Lenormand’s death at the age of 71, her nephew, a devout Catholic, inherited her possessions and extensive capital, valued at an estimated 500,000 francs. He pocketed the cash and burned all of her cards, crystals, and fortune-telling paraphernalia, according to Michael Dummett, a former professor of logic at Oxford, who co-wrote a book on the subject. Yet Lenormand’s legacy has persisted, particularly via Lenormand cards, an altered set of tarot cards commonly used by contemporary fortune-tellers.

Tarot cards, with their amalgam of ancient mythologies and pagan beliefs, may be a bridge toward Catholicism itself.

Like Lenormand’s nephew, most Catholics in the region despised fortune games, which represented unknowability in a supposedly all-knowable world, one in which God pulls the strings. In The Consolation of Philosophy, Boethius introduces a character called Lady Philosophy who explains that “chance” is “an empty word…what room can there be for random events since God keeps all things in order?” Similarly, in Chaucer’s “The Knight’s Tale,” the first of The Canterbury Tales, Theseus reminds his subjects after a series of misfortunes that “the First Mover of the First Cause” determines all outcomes in accordance with an overarching plan. This is the same notion that Voltaire would later satirize in Candide. The wise man, Voltaire argued, realizes that a reversal of fortune is not part of a divine plan, but rather a kind of horrible happenstance that sometimes befalls one, based on no wish or advice of divine beings.

By providing an alternative to God’s omniscience, fortune-telling menaced the legitimacy of religion: Foreknowledge was the exclusive realm of God, and claims from anyone else—cartomancers or fortune-tellers, for instance—were a threat.

But there’s an acute irony to be found in the similarities between fortune-telling apparatus and Catholicism itself. Tarot cards, with their amalgam of ancient mythologies and pagan beliefs, can be viewed as a bridge toward Catholicism. The patron saints and icons of Catholicism, each of whom has defining characteristics, occupations, and symbols, mirror the characters of the tarot. For instance, in the Catholic faith there is the Archangel Gabriel. His symbol: archangel. His patronage: telecommunication workers and stamp collectors. His attributes: carries a trumpet; is clothed in white and blue. In standard tarot decks, there is the High Priestess. Her symbol: Holy Mother Church. Her patronage: a link to the subconscious. Her attributes: wears a Papal tiara; is clothed in white and blue.

What is perhaps most salient within the history of fortune-telling is the way it both reifies and subverts capitalist economics. Its subversion can be seen when one thinks of the ideological scandal that would ensue if one indeed had the ability to predict the outcome of the lottery, a feature of most capitalist societies. The capitalist ethos of self-mastery is undermined by the possibility of luck leading to success without proportional labor. As a result, games of luck tend to be sidelined in capitalist societies, looked down upon as pastimes of the poor and lazy.

“Patience, and shuffle the cards,” Cervantes wrote in Don Quixote. This notion serves as the foundation for the American myth of self-made success: One must work for success, but at the same time, anyone can achieve it. The American myth of the self-made man therefore creates a double bind: One must work, but one might also get lucky. As a result, those in inferior socioeconomic positions can feel that they still have the possibility of ascending by means of luck, while those in superior socioeconomic positions can feel deserving of their success as a result of their supposed hard work.

Through games of luck comes the notion of the “big break,” an idea that has been fundamental to diffusing socioeconomic frustrations for centuries, first observed by Louis Hartz in The Liberal Tradition in America. In the many hundreds of seventeenth- and eighteenth-century European stories and fairy tales first told by the lower classes, one finds that the peasants never look to alter the royal system that oppresses them; rather, a happy ending occurs when the peasant himself becomes the king through a series of chance events. That’s to say, the occurrence of “big breaks,” however seldom, is enough to keep the masses contented with an unjust social system; they angle to be at the top of the current society, rather than looking to do away with the society entirely.

The market is chance rebranded as morally righteous labor.

What has proven trickier for social elites to justify are the games of chance that are fundamental to their own success, the modern stock market being the quintessential example. How does a capitalist society make playing the stock market look like labor, so that the high earnings that often come from it appear to be derived from proportional work? How do the affluent “cleanse” their earnings, overcoming the taint of chance through the appearance of work, thereby conferring moral legitimacy on their positions of power? The elite solution has been to disguise the stock market as a place of complex probabilities and algorithms rather than what it fundamentally is: luck. It is chance rebranded as morally righteous labor.

While lotteries and games of chance have often been a vehicle for the elite to extract money from the less-informed masses without upsetting them (a disguised regressive tax, as pointed out by the sociologist Roberto Garvia), in certain circumstances, lotteries have also been used as a political tool—a patronage benefit for the politically useful.

Although lotteries in Europe date back to the sixteenth century, it was later, in 1694, that a “lottery craze” swept through Europe, according to Roger Pearson, a French historian at Oxford. This craze followed a familiar pattern: democratic possibility (anyone could theoretically become rich) mixed with aristocratic reality (those who already had access to capital and political connections stood a significantly better chance of winning). In a peculiar turn, it was Voltaire who saw that, for various reasons, the prize in each Parisian district was greater than the total cost of all its lottery tickets. By buying up as many bonds as possible from the Paris mayor’s office, he stood to win the lottery with near certainty and make out with more money than he’d put in.

In his autobiographical Historical Commentary on the Works of the Author of La Henriade, Voltaire wrote, “The authorities issued tickets in exchange for Hôtel de Ville bonds, and winning lots were paid in cash and all in such a way that any group of people who had bought all the tickets stood to win a million francs.”

But it wasn’t just his craftiness that helped Voltaire in his “infamous lottery and market speculation,” as referred to by the historian W. Johnson in “Voltaire after 300 Years;” it was his connections as well. As Pearson has pointed out: “Clearly [Voltaire] had an understanding of sorts with the notaries appointed to sell the tickets, and it seems that he did not have to pay the full price of the tickets, so certain were he and his associates—and perhaps the notaries selling the tickets, presumably cut in on the action—of winning.”

Voltaire, therefore, exploited his political connections and presumably bribed the notaries—two groups of people who were surely more willing to work with him given his fame—in order to win what eventually amounted to be about 7.5 million francs, an exorbitant sum that allowed him never to work, to buy up châteaux, and generally live as a king might. It is hard to understate the extent to which there was a double standard in games of chance: The poor who engage in games of chance are looked down upon, whereas the well-known had games of chance intentionally turned toward their advantage.

But what, ultimately, is chance? What is this unpredictable, unknowable element that beguiled Frances, Lady Shelley, Marat, Robespierre, and Lenormand’s other patrons?

Heisenberg’s uncertainty principle declares that, “Everything in the world looks coincidental by any current observation method, since any law or principle is expressed only probabilistically. No one can say whether a thing has absolute inevitability.”  In this sense, a fortune-telling is simply an exhibition of one of many possibilities, rather than the absolute truth. It is, therefore, never really wrong, and although it affects core tenants of society—religion, economics—it is only ever absolutely correct by chance. 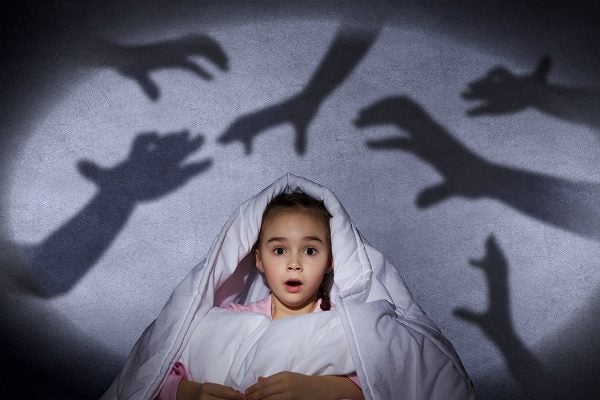 How Scary is Too Scary?

Halloween poses questions for parents, like how scary is too scary for their kids? The answer depends on when we ask the question.