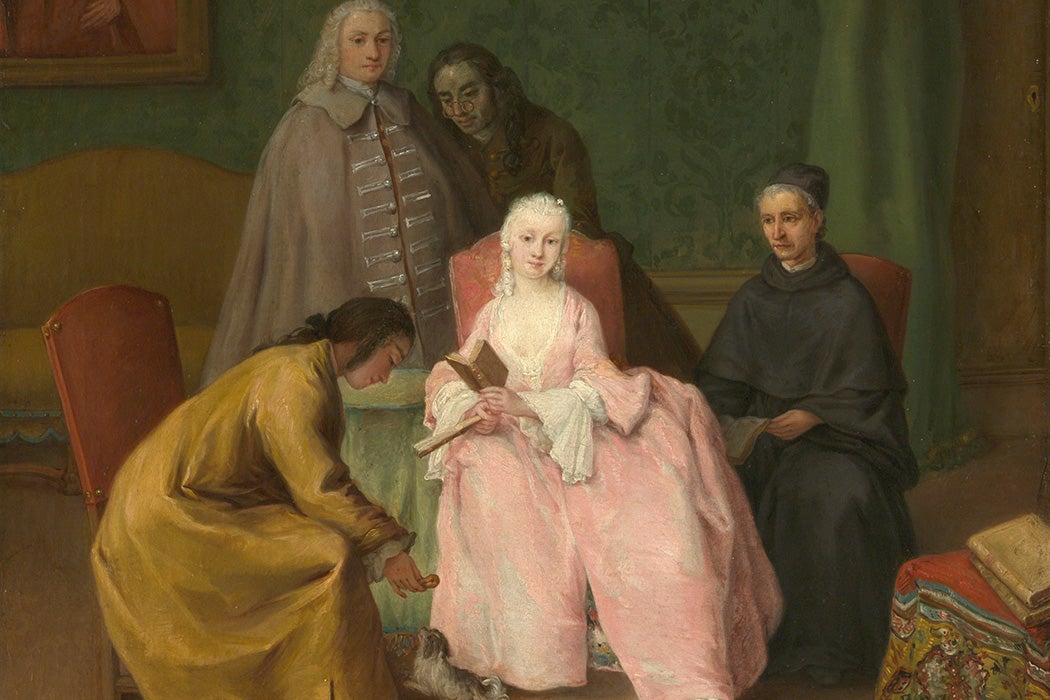 Called cicisbei, these young men were expected to serve as a constant escort to their lady. In church, the cicisbeo would carry his lady’s prayer-book and sprinkle her forehead with holy water; at the theater, he would sit behind her and whisper flirtatiously into her ear. His role was something between a devoted courtier and a personal servant.

There was a surprisingly practical reason for the institution of the cicisbeo. Italian noble families practiced primogeniture.

These relationships, although somewhat scandalous to visitors from elsewhere in Europe, were completely socially sanctioned. As the English traveler Lady Mary Wortley observed, “The fashion… is now received all over Italy, where the husbands are not such terrible creatures as we represent them. There are none amongst them such brutes to pretend to find fault with a custom so well established.”

Some ladies even traveled with a whole train of cicisbei with them, each with their own slot in the pecking order. In her novel Corinne, Germaine de Staël gives a picture of the phenomenon:

Three or four men with different functions follow the same lady, who, sometimes without even taking the trouble to mention their names to her host, takes them with her; one is the favourite, another is the man who aspires to be so, the third is called the sufferer (il patito). He is completely scorned; but he is allowed to play the part of ardent admirer; and all these rivals live peacefully together.

The custom may be bizarre to modern eyes, but in fact there was a surprisingly practical reason for the institution of the cicisbeo. Italian noble families practiced primogeniture, meaning that the full inheritance would fall on the eldest son; to avoid competing claims, they often prevented younger sons from marrying at all. This created a vast pool of young men with all the advantages of gentility, but no access to their patrimonial wealth. Being a cicisbeo gave these young men something to do; it offered them social connections and membership in a family.

But there was doubtless a more personal element. Noble women’s marriages were arranged by their families for money and status, not love; very often, they were schooled in convents, meaning they had little contact with the outside world before their weddings. As Lady Mary Wortley wrote, “‘Tis true they [i.e., the women’s husbands] endeavour to give her a cicisbeismo of their own choosing, but when the lady happens not to be of the same taste (as that often happens) she never fails to bring it about to have one of her own fancy.”

On the other hand, the cicisbeo could also be seen as a guardian of moral propriety. His presence ensured that the lady was always accompanied by a male escort in public, while freeing up her husband to travel and conduct business (or visit his own mistresses). A husband-approved cicisbeo may even have stood in the way of more threatening romantic entanglements; at one point in his diaries, the infamous Casanova laments that he was being prevented from meeting with the object of his affections—not by her husband, whom he judged as too “stupid” to even notice the affair, but by her cicisbeo.

What were the relationships between ladies and their cicisbei really like? The relationships were probably as varied as the people in them. Perhaps some were really in love. But given the way the cicisbeo was obliged to serve his lady, it’s easy to imagine some of these relationships manifesting as strange, strained boss-employee dynamics. From this historical distance, there’s no way to know for sure. All we have are hints, from the letters and diaries of cicisbei and their ladies.