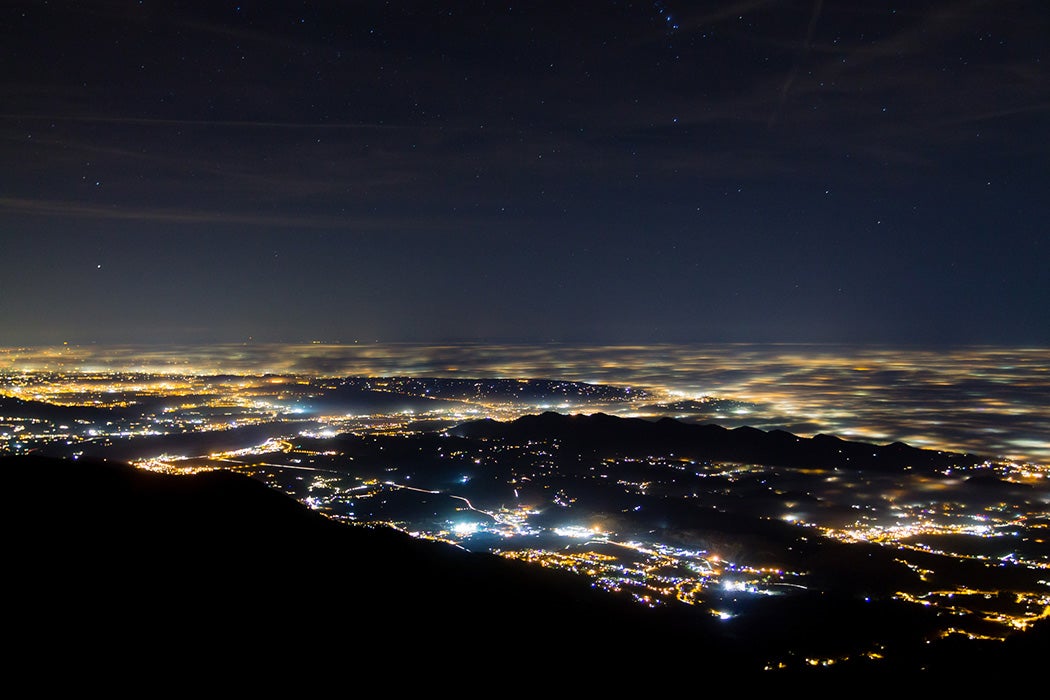 Human beings have always sought the light. We are more active during the day, and most of us rely heavily on our sight. It is no surprise that, even in ancient times, we produced artificial light through fire to make us more comfortable at night. The advent of electric light was, of course, a game-changer, to the point that, now, our lights can be seen from space. But we may have gone too far.

When we are told to “turn off the lights for the environment,” we usually think about the carbon released into the atmosphere to generate electricity. What many of us don’t know is that artificial light itself can be a pollutant, threatening the health of both animals and plants.

Some of the consequences of artificial light for animals are well known. Artificial light attracts insects and its disorienting effects cause birds to collide with buildings or hatching turtles to run away from instead of toward the sea. But light may have an impact on whole ecosystems. If two animals forage in the same place at different luminosities, artificial light will extend foraging time for one at the expense of the other. The extra light may also make it easier for predators to catch their prey. In both instances, light may unbalance the populations of different species, which can lead to further damage to the ecosystem.

Light pollution may also impair animal reproduction. One example, highlighted by researchers from Finland, is the European glow-worm (Lampyris noctiluca). The female of this species use light they produce in their abdomens to attract the males. Since their energy is limited (they only eat during their larval phase), females refrain from shining their light until it is dark, when it’s easier for them to be seen by males. When exposed to artificial light, females will delay their glowing or stop glowing altogether, thus diminishing their chances to mate.

The impact of artificial light on reproduction also can be seen in species much closer to ours, such as the gray mouse lemur (Microcebus murinus), a small primate from Madagascar. These nocturnal mammals do not mate during the dry, cold winter, waiting for the better conditions of spring and summer to raise their offspring. Researchers from the Muséum National d’Histoire Naturelle, in France, have shown that the main cue for females to enter their reproductive phase is the length of the day. Just five weeks of exposure to light during the night was enough to delay their reproductive behavior. This change in behavior may cause harm, since their offspring may be born in an unsuitable environment.

Changes in animal behavior and physiology may, in turn, have consequences for human health.

There were also physiological changes in these lemurs, such as a rise in body temperature and urinary 17-β-estradiol, a female sex hormone. The researchers believe that both behavioral and physiological effects are mediated by a hormone called melatonin. The production of this hormone by the pituitary gland is inhibited by light, disrupting the seasonal changes in the whole organism.

Changes in animal behavior and physiology may, in turn, have consequences for human health. One example is the increase in transmission of the West Nile Virus. This virus, which may cause symptoms such as fever, headache, rash and, in more serious cases, encephalitis and meningitis, has birds as its natural hosts and is transmitted between them by mosquitoes, but it can also infect humans. Researchers from the U.S. have shown that sparrows exposed to light at night had their immune response disrupted and had the virus in their bodies for two days longer than those that were not exposed. A mathematical model created by these scientists shows that extra light can increase the outbreak potential of the virus by 41%.

Another way light may increase transmission of the West Nile Virus is by increasing the contact between the host and the mosquitoes: this virus is more prevalent in urban birds. Researchers believe that light at night fragments their habitats, causing them to clump together, thus facilitating transmission by the mosquitoes.

Light pollution is also damaging marine ecosystems. Zooplankton—microscopic animals that drift in the water—migrate to deeper waters during the day and back to the surface at night, to graze on algae. While they are very small, thanks to their numbers, zooplankton movement is considered one of the largest daily migrations of biomass on the planet. On the surface, they graze on algae, controlling their population. Their excrement sinks to deep waters, taking nutrients that are important for organisms who live in the depths. Zooplankton avoid rising to shallow waters when there is light, even if it is artificial light. Lights from boats, offshore platforms, and coastal cities can disrupt the movement of nutrients in the ocean and allow for the overgrowth of algae, impacting entire food webs.

The Great Barrier Reef, the world’s largest barrier reef system, is also under threat from artificial light. Corals reproduce by releasing their gametes in the water. To increase their chances of success, they synchronize this release. More than 130 different species of corals in the Great Barrier Reef spawn yearly in a time window of 30 to 60 minutes. To reach this level of synchronization, corals use various cues, such as water temperature, the tides, the time of sunrise and sunset, and the intensity of the moonlight.

Researchers from Australia have shown that artificial light may interfere in this process. Their research indicates that corals have a protein similar to melanopsin, which detects light in a mammal’s retina and is involved in regulating our circadian rhythms. They also found out that just seven days of exposure to light at night is enough to disrupt the pattern of gene activation in corals.

Not Just Fauna, Flora Too

Not only animals are impacted, plants are also disrupted by artificial light. They are affected both directly and indirectly—that is, by changes in the behaviors of the animals that interact with them, such as herbivores and pollinators. Many plant species use the length of the day to know what season they are in, regulating when they bloom, bud, or shed their leaves. Exposure to artificial light can lead them to act out of season, keeping their leaves during winter or budding earlier than they should. This can lead to dire consequences for the plant. They may suffer injuries in their leaves due to low temperature or be exposed to pathogens and herbivores in other seasons.

The impact on plants can, in turn, lead to changes in the landscape. In the Natural Reserve Dunas de Maspalomas, on the Spanish island of Gran Canaria, researchers observed that light from the local resorts is inhibiting the flowering of Traganum moquinii, a plant that typically grows in coastal sand. These plants have an important role in the formation of dune ridges and nebkhas, small dunes formed in plants. Since these dunes are a major regional tourist attraction, the light may have negative economic consequences.

The best way to prevent ecological damage from light would be maintaining and increasing unlit areas. When unlit areas aren’t possible, there are ways to mitigate the impact of excess light. Much of light pollution is caused by “trespassing light,” that is, light emitted in unnecessary directions. By reducing the emission of horizontal and upward light, it is possible to reduce light pollution with little impact on functionality. More focused light also allows for intensity reduction, which reduces not only light pollution, but also energy costs and carbon emissions.

Another factor to take into consideration is the light’s wavelength, which we see as its color. Different types of light have different wavelengths: incandescent lights are closer to red, while mercury-vapor lights are closer to blue. Fluorescent light and LED lights can vary depending on the model, but most are white. Species also differ in what wavelength they are more impacted by: plants usually are more impacted by redder lights, while animals suffer more with blue lights. Thus, whiter lights, which cover a wider spectrum of colors, may cause more harm. Shifting to different colors of light—or using filters—may help to mitigate the impact.

Light pollution is increasing at more than 2% per year. One of the challenges for containing it is the scale of the problem. In this context, citizen science, research carried out completely or in part by non-professionals, is a good tool for data collection and analysis. Some of these projects, such as Cities at Night, rely on citizens to select useful photos for mapping light pollution among hundreds of thousands taken by astronauts and satellites. Others, such as Globe at Night, rely on citizens to submit data on night sky luminosity as observed from the ground. Projects like these can help us to reduce our’s light’s effects on the world that surrounds us.

Share Tweet Email Print
Have a correction or comment about this article?
Please contact us.
animal behaviorlightCitizen Science: Innovation in Open Science, Society and PolicyEcologyFrontiers in Ecology and the EnvironmentJournal of EcologyJournal of MammalogyOceanography 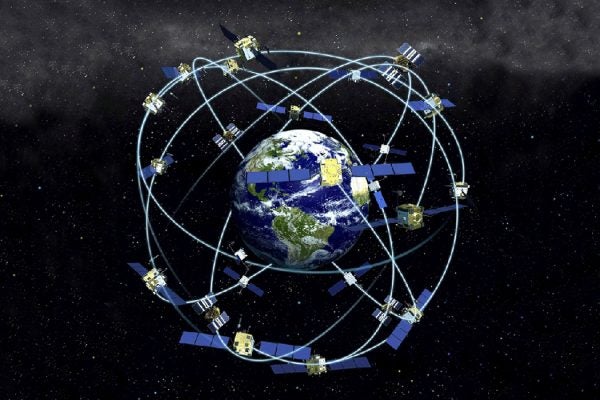 Does an increase in satellites mean we soon won't be able to see the stars?