Second Chance Month is new, but concerns about job prospects, losing the right to vote, and high recidivism rates for the formerly incarcerated are not. 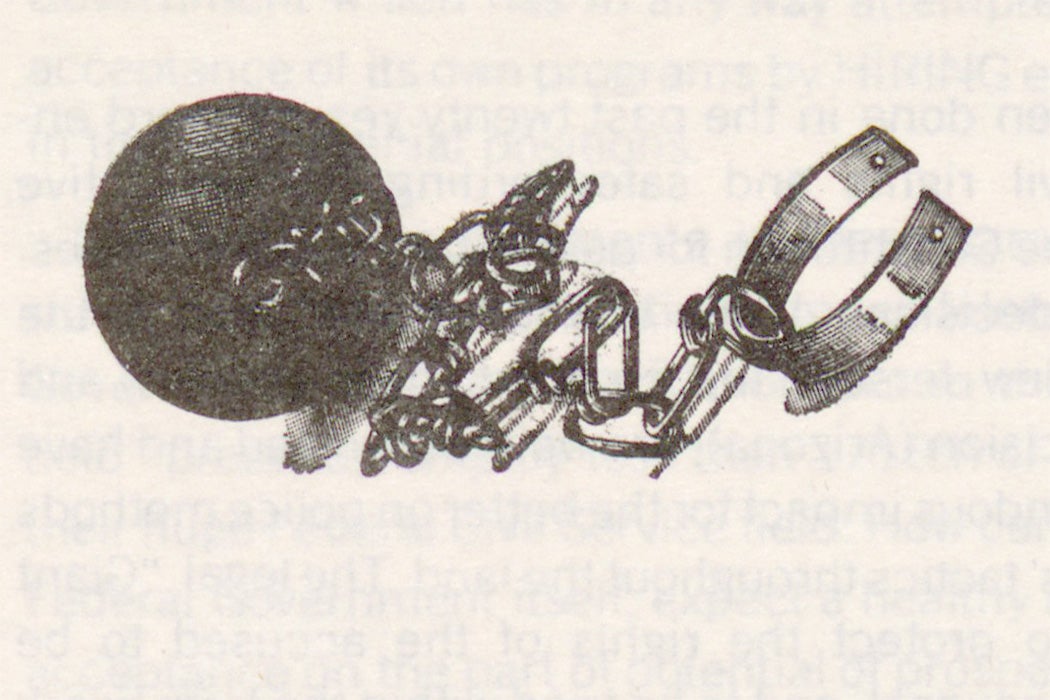 An illustration of a ball and chain from Cummins Journal
via JSTOR
By: Morgan Godvin
4 minutes
Share Tweet Email Print

“After incarcerated individuals serve their time, they should have the opportunity to fully reintegrate into society,” read President Joe Biden’s proclamation on Second Chance Month on March 31, 2021. “It benefits not just those individuals but all of society, and it is the best strategy to reduce recidivism.”

Observed since 2017, Second Chance Month is a national awareness campaign to address the thousands of collateral consequences that come with having a criminal record. Those consequences, such as being denied housing, employment, and professional licenses, have been shown to increase recidivism and worsen outcomes across the board.

A 1974 editorial in the Cummins Journal by Bob Scanlon offers troubling historical context. 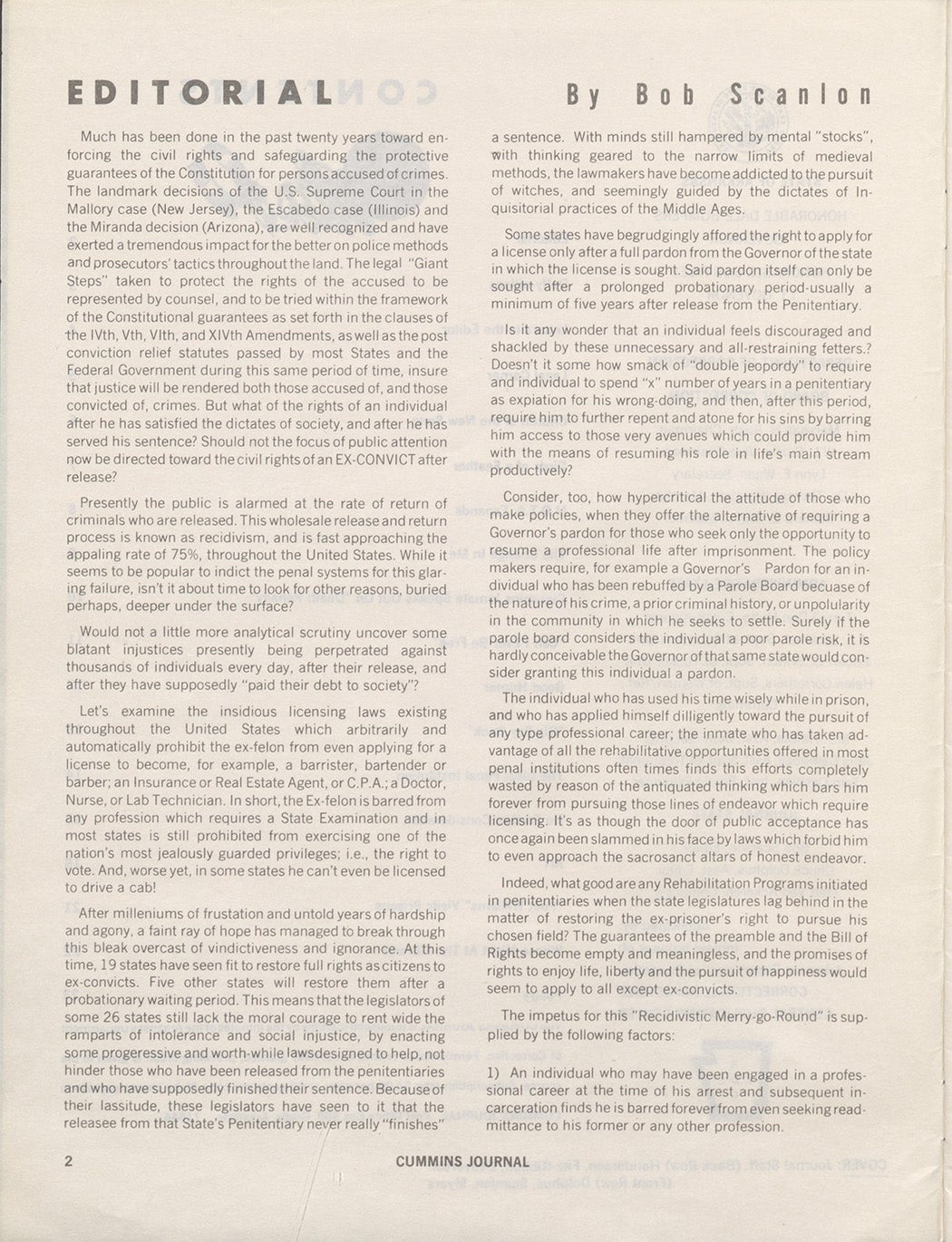 The same phenomenon that inspired President Biden’s remarks 47 years later was being lamented in 1974. People were returning to prison because their economic opportunities were being limited by intentional policies, usually at the state level. Scanlon found the 75% recidivism rate to be egregiously high. Today’s number is only slightly lower, depending on the metric used and jurisdiction measured.

The issue of formerly incarcerated people’s right to vote is still contentious. Eleven states restrict the right to vote even after release from incarceration and completion of parole or probation; Florida voters voted to re-enfranchise people in the state with felony convictions in 2018, but the following year legislators made it contingent upon repaying all court fines and fees. An estimated 900,000 in the state remain disenfranchised in the state due to their inability to pay.

…the lawmakers have become addicted to the pursuit of witches, and seemingly guided by the dictates of the Inquisitorial practices of the Middle Ages…

The individual who has used his time wisely in prison, and who has applied himself diligently toward the pursuit of any type of professional career; the inmate who has taken advantage of all the rehabilitative opportunities offered in most penal institutions often times find this efforts completely wasted by reason of the antiquated thinking which bars him forever from pursuing those lines of endeavor which require licensing. It’s as though the door of public acceptance has once again been slammed in his face by laws which forbid him to even approach the sacrosanct altars of honest endeavor.

Professional licensure, required for professions from being a barber to being a psychologist, is often denied to people with a criminal record, just as it was denied during the time Scanlon wrote his essay. The Federal Sentencing Reporter listed Indiana’s 2018 law as the most progressive at the time. That law merely mandated that the disqualifying crimes be listed upfront, and that the nature and seriousness of the offense, the passage of time since its commission, the relevance of that crime with the job duties, and evidence of rehabilitation be considered. Even under that law in Indiana, people with recent convictions may still struggle to be licensed and therefore precluded from engaging in their vocation.

A key difference between Scanlon’s essay and now is that in 1974, parole was granted more frequently. The 1970s were also a time when rehabilitation, rather than punishment, was being emphasized in prisons. Nevertheless, Scanlon points out the government’s hypocrisy at the time: “despite their claims of progressive programming, there is not one state, not even the Federal Government which has in any way attempted to implement acceptance of its own programs by HIRING ex-convicts, even in the most menial positions.”

Today, many states have passed “Ban the Box” initiatives to improve the employment opportunities for formerly incarcerated people, but reentry (reintegrating to society after incarceration) and recidivism rates still prove challenging. In response to these public policy issues, Second Chance Month and Reentry Week were recognized as awareness events by the federal government.

Though progress can feel elusive, it should be noted that the federal government does hire people with criminal records now. They even published a “mythbuster” to dispel the notion that those with convictions are barred from federal employment. The Fair Chance Act “banned the box” for most federal agencies and government contractors, beginning in December of 2021. It is unclear what percent of federal employees may have a criminal record, but with several meaningful policy changes in effect it is likely to be more than the 0.1% statistic of 1974 that so outraged Scanlon.

For most other points of Scanlon’s essay, which is worth reading in its entirety, there have been fewer major policy changes.

Though President Biden’s statement came nearly five decades after Scanlon’s essay, it would appear they are in agreement.

“We must remove these barriers.  Every person leaving incarceration should have housing, the opportunity at a decent job, and health care.  A person’s conviction history should not unfairly exclude them from employment, occupational licenses, access to credit, public benefits, or the right to vote.  Certain criminal records should be expunged and sealed so people can overcome their past.” 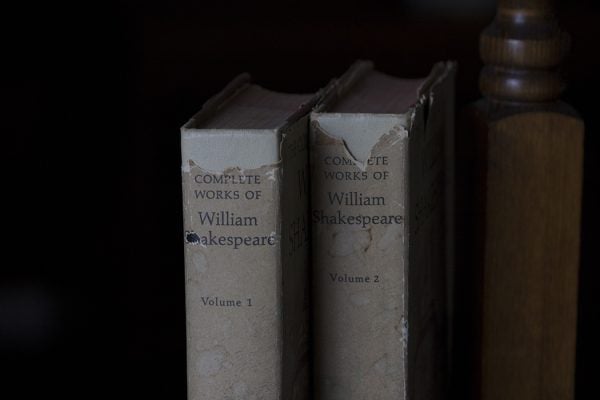 In Memoriam of the Convict Scholar

An 1899 issue of The Monthly Record reports the death of an acclaimed Shakespearian "convict scholar," who served over 20 years on a life sentence. 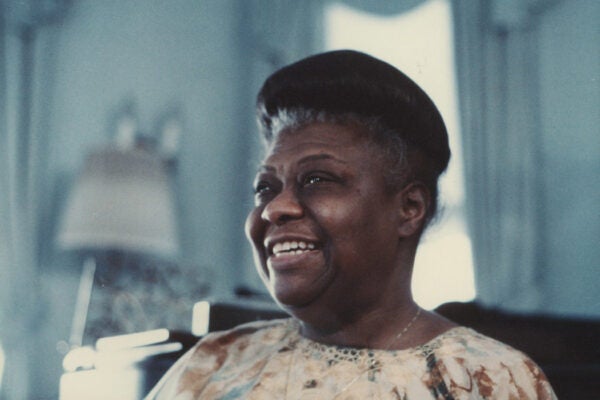