Urban apiculture is a booming trend. But many metropolitan beekeepers also believe that bees fare better in cities than they do in the countryside. 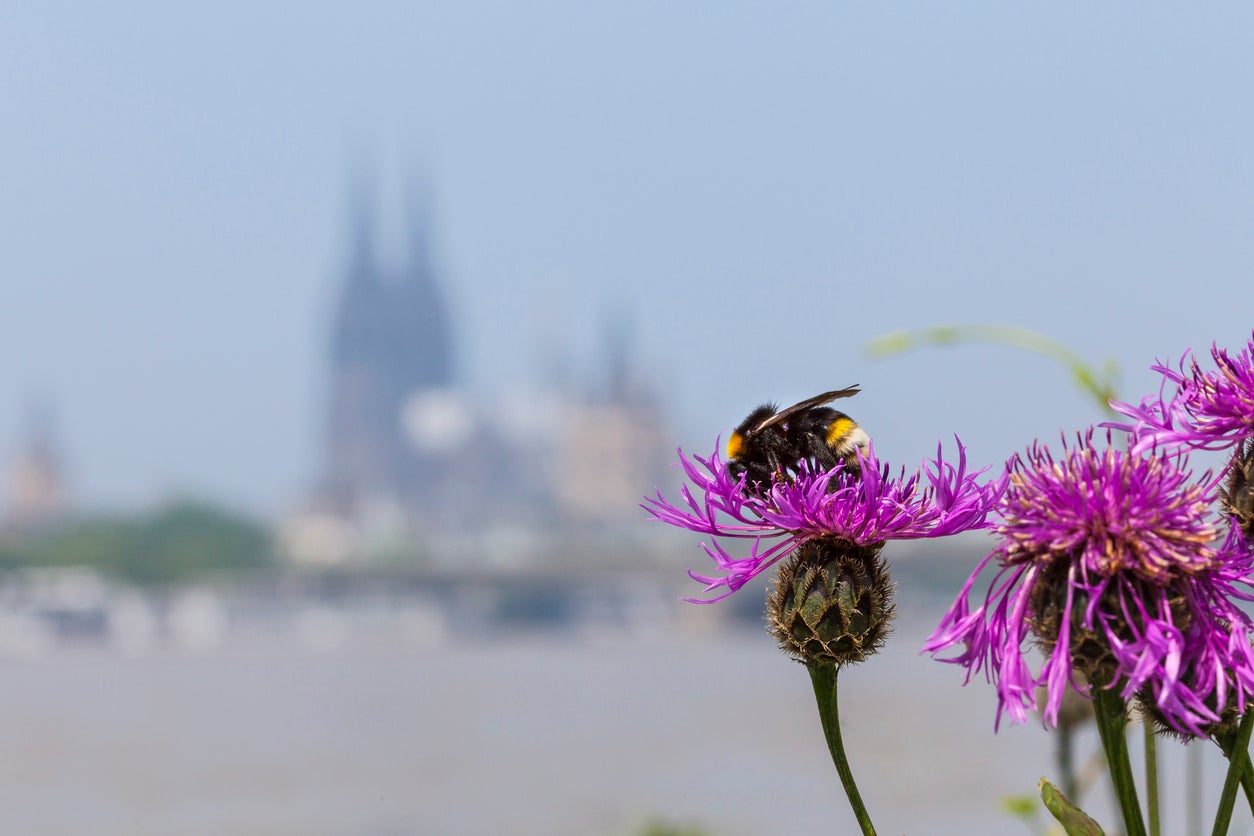 Bees may have better food choices in cities than they do in the countryside.
iStock
By: Claire Cameron
8 minutes
Share Tweet Email Print

When Noah Wilson-Rich, a Tufts University graduate student studying honeybees’ immune systems, ran out of funding in 2009, he set up a lab in his apartment in Boston’s South End. His equipment included ice from his refrigerator to sedate the bees, containers to catch them in, and fishing line and forceps to hold them in place. To his surprise, his landlord didn’t kick him out, but let him build a beehive in the building’s backyard.

At the same time, Wilson-Rich set up a Facebook page, offering beehive building and upkeep in exchange for research funds. Within three years, his research and beekeeping company Best Bees moved into an industrial facility. Today, Wilson-Rich owns an urban beekeeping empire, with hundreds of hives in nine major cities across the United States.

Best Bees’ success reflects an urban renaissance in apiculture that spans several continents. In Berlin, for example, beekeeper numbers grew by 53 percent between 2006 and 2012, according to one study. New York City is home to hundreds of hives, despite the fact that the city legalized beekeeping only seven years ago. Driven by the concern over the popular pollinators’ diminishing numbers, the ease of starting a hive, and a back-to-nature movement, urban apiculture is a booming trend. But many metropolitan beekeepers also believe that bees fare better in cities than they do in the countryside. Other wild animals have followed humans into the cities. Red foxes have been spotted in Bristol. Over 800 coyotes have been tracked in Chicago. Why shouldn’t bees thrive in the city, too?

As bee numbers dwindled in many parts of the world over the past decade, there’s a lot of buzz around the idea that keeping bees in city habitats might be better for their survival. Research shows that in more bucolic habitats bees may suffer from exposure to agricultural pesticides and a limited assortment of plants to forage as a result of industrial farming’s preference for mono-cultures—stressors that, so the logic goes, they wouldn’t be exposed to in the city.

There may be some truth to this theory, but it’s actually far more nuanced. The relationship between man and bee dates back to about 9,000 years ago, when humans first started farming. Urban beekeepers seem to be doing more than just keeping the insects alive. They’re bringing the human-bee alliance into the 21st century.

The modern plight of the honeybee hit the headlines in 2006. That year, bees across North America and Europe started dying off in droves, affected by a mysterious plague that became known as colony collapse disorder, or CCD. Some scientists blamed it on pests, some on pesticides, while others insisted habitat loss was the culprit. Some believed it was a combination of factors, such as two pesticides interacting with one another. Other hypotheses also pointed to the varroa destructor mites that parasitize honeybees, causing worker bees to flee the hive en masse. The mites may also increase the bees’ susceptibility to other pathogens. Past research has shown that bees’ diet affects their health too—particularly when they face pests or other pressures. One 2013 study, for example, found that bees that fed on a polyfloral pollen blend had stronger immune responses and better survival rates than those that fed from a single kind of pollen.

The theory that stuck, however, stated that pesticides, specifically neonicotinoids, were killing the bees. A study published in Science in 2012 found that nonlethal exposure to a neonicotinoid agricultural pesticide interfered with bees’ ability to find their hives after foraging, which had a knock-on effect for the survival of the whole hive—an observation recorded in other subsequent studies. Dr. Jon Lundgren, a former United States Department of Agriculture researcher who has since become an organic farmer, said that while at the USDA he found evidence that pesticide exposure would have an adverse effect on bee health, too. Although the research was not published, he did publish a study looking at one kind of neonicotinoid’s effects on butterflies, another pollinator, finding it caused similar stress to the butterflies as had been found in the bees. Since then, the evidence against neonicotinoids has mounted—so much that the European Union is considering a blanket ban on their use.

According to the USDA, bees pollinate 80 percent of flowering plants and about 75 percent of the nuts, fruits, and vegetables Americans eat.

Over a decade later, CCD has somewhat faded from the headlines, but the bees are still under the same level of threat. A 2016 USDA survey of honeybee colonies found they were down 8 percent in 2015. Experts still don’t know what triggers CCD, which is a frightening trend because the world’s food security hinges on the insects’ ability to pollinate crops. One 2009 study put the global economic value of animal pollination at almost $177 billion, but monetary values aside, man simply won’t last long without bees. According to the USDA, bees pollinate 80 percent of flowering plants and about 75 percent of the nuts, fruits, and vegetables Americans eat.

Urban apiarists would tell you that one big reason bees do better in cities is that no agricultural pesticides are being sprayed on plants. But that claim doesn’t quite hold.

Jeff Pettis, a professor at the Institute of Bee Health at the University of Bern, Switzerland, says that urban bees are equally exposed to pesticides as their country cousins. In an unpublished study, Pettis compared pesticide presence in 26 bumblebee colonies in Washington, D.C., and throughout rural areas of neighboring Howard County, Maryland. He found that all the colonies had pesticide traces and tested positive for a common herbicide. Similarly, a 2015 study of hives throughout Massachusetts found that hives located in Suffolk County, where Boston is situated, had the highest level of pesticides.

Neither do city bees seem to fare any better against varroa mites, said Philadelphia beekeeper John “Norris” Childs. Wilson-Rich agreed: Best Bees actively monitors its hives across the country, and they have just as many pests as do their rural counterparts, he said. In fact, urban bees may be more susceptible to the varroa mite invasions, possibly because amateur beekeepers try to keep their hives “natural” (i.e. varroa treatment–free), causing fatal infestations across cities.

But guess what—there’s one area of bee health where urban beekeepers may actually be onto something: dietary diversity. It may sound counterintuitive, but bees may have better food choices in cities than they do in the countryside, Lundgren said.

Industrial farming leans toward monocultures, so the country bees may be able to forage for a very limited amount of crops, which is known to negatively affect their immune systems. In cities, bees have access to a better variety of foods. “I think the nutrition aspect, which may be better in urban or even some natural areas, may be the best part of producing healthy bees,” Pettis said. Experts think that there may be dietary “hot spots” that offer bees particularly salubrious foraging landscapes.

Wilson-Rich is trying to find out if these “hot spots” indeed exist. An ongoing research project run by Best Bees called HoneyDNA is shedding light on the diversity of the forage their bees and bees living in more rural areas have access to. A 20-milliliter sample of honey from a hive can reveal the species of plants the bees have foraged from. “At a beehive at my own house, for example, we found we have 411 different plant species” in the honey, said Wilson-Rich. In contrast, a sample from Duxbury, a rural town south of Boston, yielded just 82 plant species. The next step, he said, is to increase plant diversity in areas like Duxbury and see if bee health improves.

So in case you haven’t noticed, bees are now hip. Urban beekeeping has established itself as a 21st-century phenomenon. Just recently, two hives were set up in the New York City’s Bryant Park, right in the middle of Manhattan. City hives allow people to “be a little more in touch with nature, plants, and bugs than urban life usually allows,” said Philadelphia keeper Childs. Local schools are also keen to get in on the act, he said, as he often exhibits his bees to a neighboring K-8 school. Such exposure may inspire a new generation of urban and rural apiarists, said Childs. Best Bees’ hive at Boston’s Museum of Science is a big draw for younger children, according to Wilson-Rich. If nothing else, added Lundgren, it may inspire people to be more conscious of their impact on their environment. “Just by planting flowers, anyone can make a big difference,” Lundgren said. Wilson-Rich agreed: You don’t need a hive to contribute, but it also doesn’t hurt—and may prove more useful than one might expect.

Theoretically, city beekeepers could lend their hives to pollinate farmers’ crops, but it doesn’t solve the single-crop issue for bees in the countryside—in a 2012 farmland census, the USDA reported that soybeans and corn accounted for more than 50 percent of all cropland harvested in the U.S. Lundgren contends that in order to see profound and noticeable difference in bee health in the countryside, farmers have to change their practices and diversify their crops. Is there a way to influence the crop choices and the overall attitude to bees’ health in the countryside?

Interestingly, urban apiculture may help with that, too. The German Beekeeper Association reported that the countryside is seeing its own slower uptick in beekeeping, possibly due to the example set by Berlin and other metropolises. The cities, which often happen to be trendsetters in innovation, may be giving the ancient art of apiculture a 21st-century upgrade. Not only does urban involvement make beekeeping “cool” again, but initiatives like Best Bees’ search for survival hot spots also may reveal ways to improve bee health in the countryside as well as in city.

Wilson-Rich, who now lives in his own house in Boston’s South End, takes pride in placing a couple of hives on his front deck. Far from being a potential nuisance, the hives serve as side tables, ideal for hosting a party on a sunny day. Honeybees aren’t usually aggressive, he says, even if you are drinking something sugary—because you don’t look like a flower, you should be fine. “I drink vodka and lemonade out there,” he said. “I’ve not had a bee in my drink yet.”

Share Tweet Email Print
Have a correction or comment about this article?
Please contact us.
beescitiesBioScienceJournal of Animal EcologyProceedings of the National Academy of Sciences of the United States of AmericaSanctuary: Modern Green HomesScience