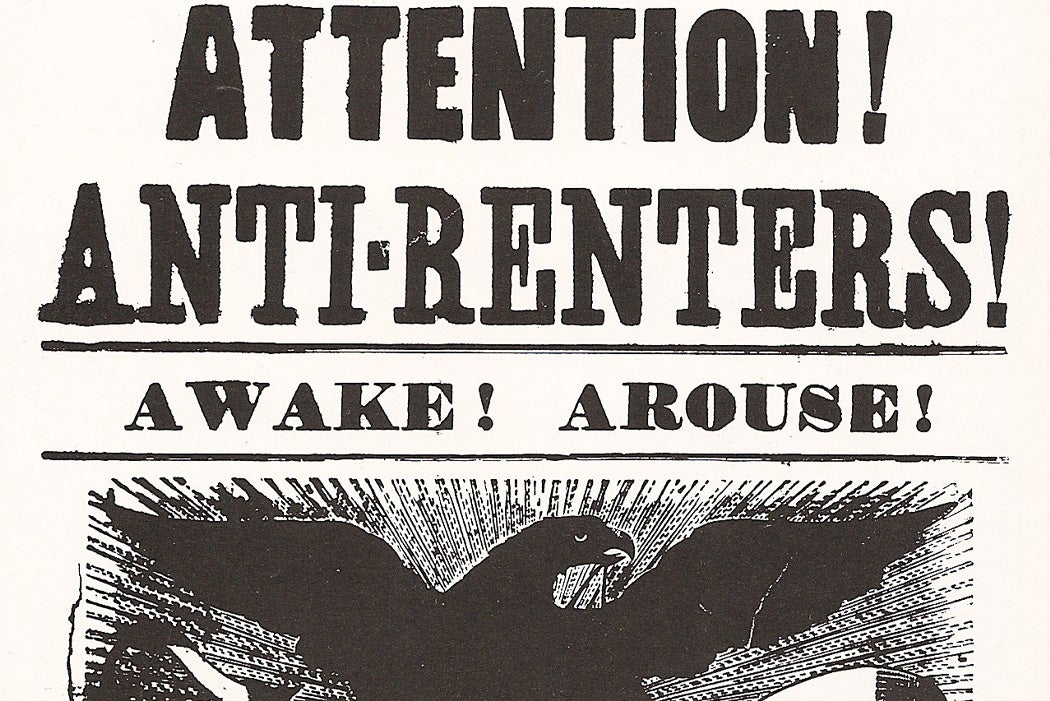 In the nineteenth century, a long-simmering New York State political struggle over rent came to have national implications. Rebellious farmers of the Hudson Valley helped to bust open the two-party system of the time: Democrats vs. Whigs.

Historian Reeve Huston explores how transformations in national politics—changing political alignments, the birth of new parties out of the ashes of old ones, and greater white male participation in voting—played out for the anti-rent movement.

As late as 1845, patroons controlled the leases of a quarter-million people—about 12 percent of the state population.

The farmers in question rented their land from “patroons,” hereditary owners of manor estates set up by the Dutch West India Company during the state’s colonial days. This land-owning pattern was essentially feudal, and it survived the American Revolution. As late as 1845, patroons controlled the leases of a quarter-million people—about 12 percent of the state population.

Little wonder, then, that sporadic tenant revolts were crushed by the state. But things would change when the Democrats and the Whigs started competing for power with local landlords and drew tenants into their fold beginning in the 1820s. The expansion of voting rights to white men who didn’t own property was crucial.

As Huston explains, “political parties replaced landlords as the primary agent of mediation between tenants and government, and they drew virtually all adult, white, male tenants into the political process.”

According to Huston, “The emergence of two-party democracy had a momentous and ironic outcome at the grass roots.” The Whigs and the Democrats mobilized tenants through “powerful social and political ideas” and by giving them experience as organizers. But the tenants didn’t always act in ways that these new parties found palatable.

Rent strikes, calls for land reform, and resistance to tax collectors and sheriffs exploded in 1839, when Stephen van Rensselaer III died. (In 2009, Fortune numbered Rensselaer among the richest Americans ever, as measured by his total wealth as a fraction of the GDP at the time of his death.) When his heirs promised to collect overdue rents, leaseholders “rose up to destroy these estates and distribute the land among those who farmed it.”

The “wars” simmered through the 1840s. “Calico Indians,” white men in redface and costumes, protected tenants and threatened landlords. In 1845, members of one of these self-styled “tribes” killed a deputy sheriff, setting off a combined posse-militia sweep through three counties. They arrested hundreds.

Huston argues that internal divisions within the Whigs and the Democrats were exacerbated by the radicalness of the anti-renters. Whigs, for instance, included both landlords and anti-renters in their coalition. The contradictions helped to shatter the party. Some joined the Know-Nothings, others the new Republican Party.

The anti-rent rebellion wasn’t the sole cause of the realignment from the Democratic–Whig two-party system to the Democratic–Republican one. But Huston argues that it was a significant factor in the shift. Uprisings from below have a tendency to disrupt established orders.

The Parties and "The People": The New York Anti-Rent Wars and the Contours of Jacksonian Politics
By: Reeve Huston
Journal of the Early Republic, Vol. 20, No. 2 (Summer, 2000), pp. 241-271
University of Pennsylvania Press on behalf of the Society for Historians of the Early American Republic