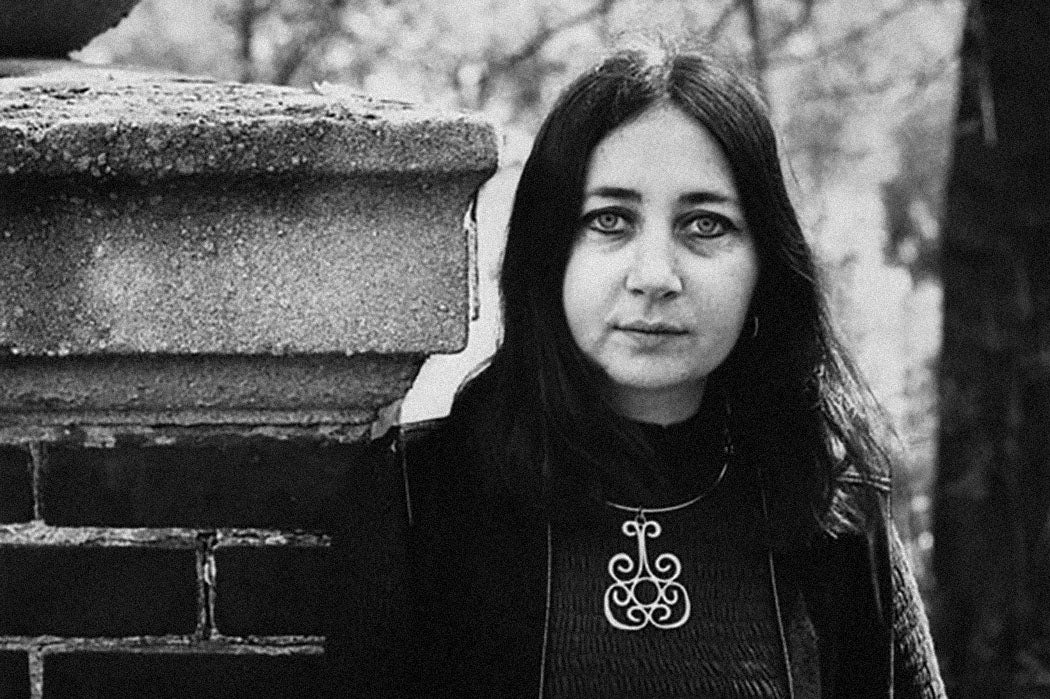 “If it is permissible or even possible to apply a single adjective to the aim of Gwendolyn MacEwen’s writing, then the most accurate word would be explorative,” writes J. L. Bartley in his preface to Invocations, a commentary on MacEwen’s poetry and prose. “All of her publications to date have been concerned with a quest for a particular knowledge or vision and, consequently, with the communication of such knowledge to her audience.”

In other words, the Canadian poet and novelist Gwendolyn MacEwen (1941–1987) was a writer who didn’t just write about what she knew but also what she wanted to know. This is reflected in a writing style that was celebrated by fellow Canadian author Margaret Atwood (best known for The Handmaid’s Tale), who knew MacEwen personally.

For forty-six years, she lived a full, complete life, and yet she is underrated as a figure in Canadian literary history, being regarded as a notable but minor contemporary writer.

In the span of MacEwen’s illustrious career as a poet, novelist, and self-disciplined researcher, this extended to anything and everything from Ancient Egyptian mythology to folk magic, from Gnosticism—the study of first-century CE Jewish and Christian practices—to the Arabic language, from global politics to private intensities. Everything.

But she did far more than just research and write. She traveled abroad and enjoyed new experiences. She translated Greek classics into English. She ran a bohemian coffee shop in Toronto, appropriately called The Trojan Horse. She had intense romantic relationships with poets and musicians. For forty-six years, she lived a full, complete life, and yet she is underrated as a figure in Canadian literary history, being regarded as a notable but minor contemporary writer. 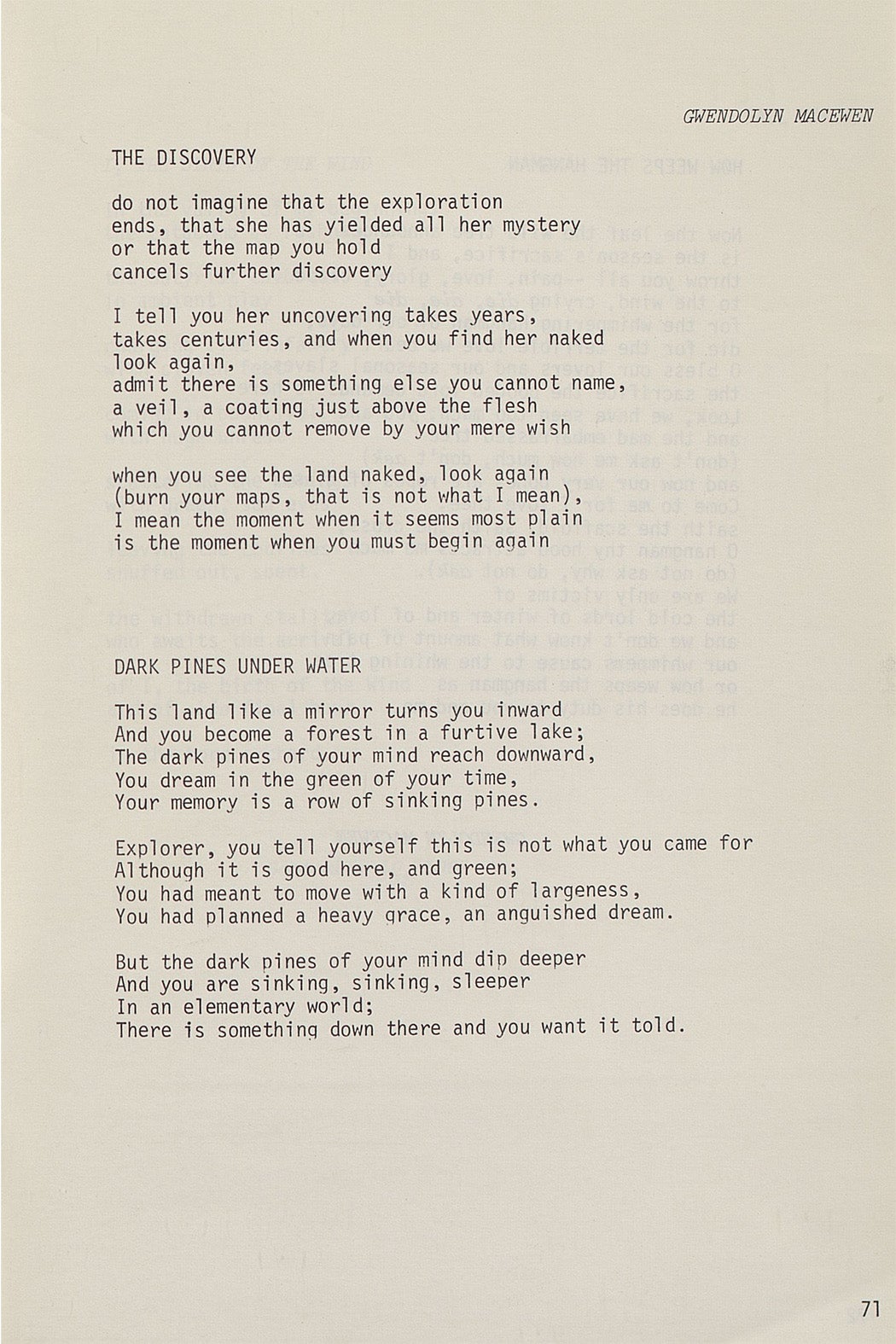 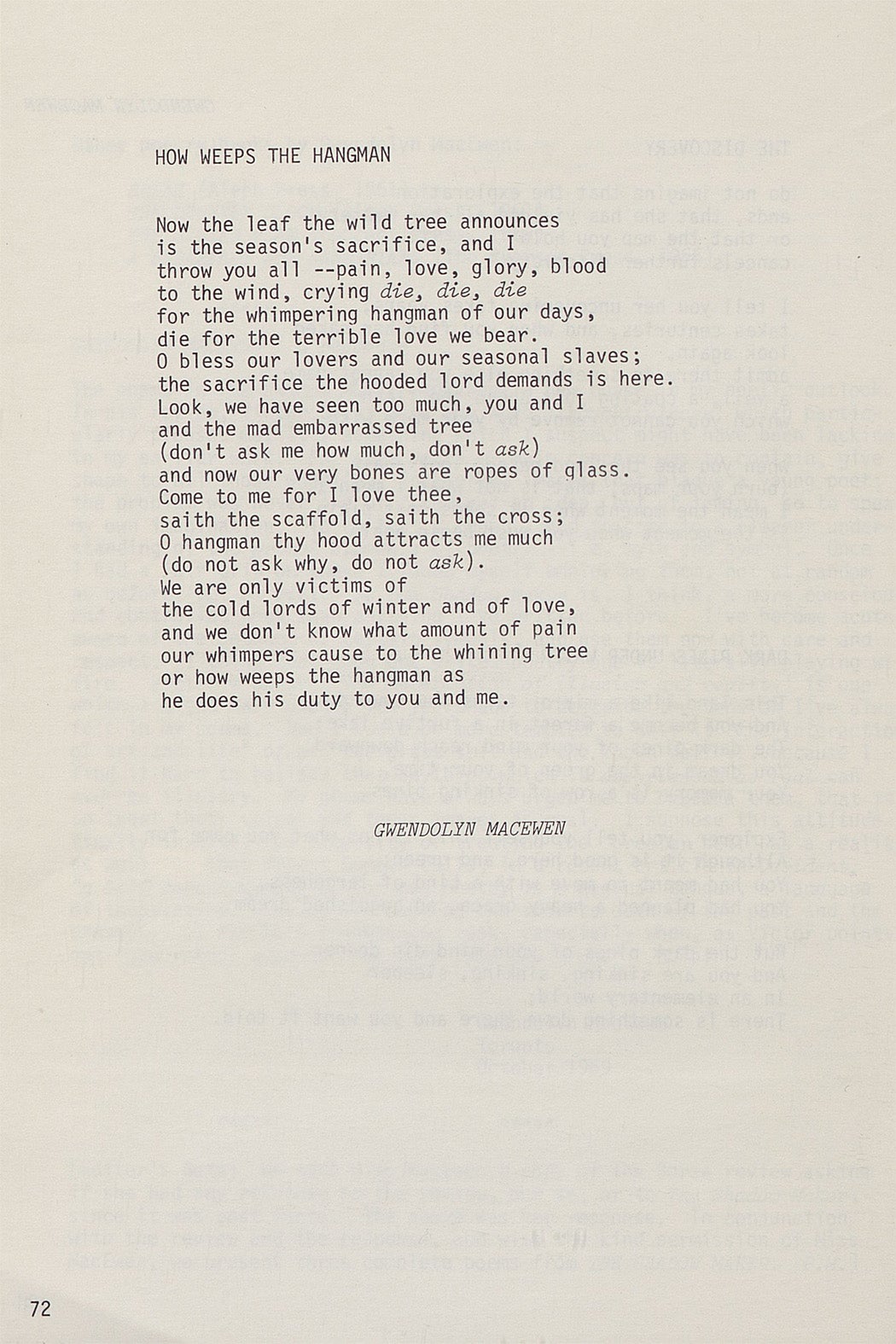 Born September 1, 1941, MacEwen knew from a young age that writing poetry was her destiny. Starting with a poem published in the Canadian Forum at age seventeen, she produced a body of work that included more than a dozen volumes of poetry, two novels, children’s books, short stories, a travel diary, and drama scripts. Her trademark technique was a combination of the complex, earthbound self blended with a transcendent tone of mysticism and “an exoticism that arose from her fascination with the Near East.” She evoked secular concepts existing in extraordinary circumstances, though the fantastical elements of her fictional worlds are probably too strong for her work to be classified as magical realism. Sometimes they ventured into morbid territory. “The poems are directed inwards, downwards, into the dark reaches of the psyche,” wrote Rosemary Sullivan about MacEwen’s The Shadow-Maker, in her introduction to The Selected Gwendolyn MacEwen. “We run in terror from the dark reaches within ourselves and yet, as she believed, the real mysteries are there.”

MacEwen’s poetry was her laboratory for experimentation and expression. Her poem “Jewellry,” published in boundary 2, gives the sense of a restless spirit seeking a worthwhile purpose in life:

I wear it more to be its captive
than to captivate; I want
to be the prisoner of gold,
to hear my voice break through
the chain which holds my song
in check…

“Hynos,” also published in boundary 2, demonstrates MacEwen’s ability to create sensitive and relatable characters who are perpetually attuned to their natural surroundings:

Horses (I think) charge into
the white night of his sleep.
He celebrates the birthdays of his dreams
and does not know I ponder
how I might join him there.

Yet I fear to even if I could
for in his sleep he is powerful
as a withheld word.

This is a skill MacEwen transfers to her novels, including Julian the Magician and her King of Egypt, King of Dreams, which often read like poetry.

MacEwen died November 29, 1987, due to health complications surrounding her alcoholism. Though her creative life flourished, she still struggled with inner demons and subsequent addiction to self-medicative substances, as do many writers whose minds are constantly rotating without rest and reprieve. Yet the powers of her intellect remained consistently extraordinary. “She reaches out almost eclectically and unfastidiously to forgotten universes and live worlds of science and literature and inner landscapes,” concludes Eisig Silberschlag in a review of MacEwen’s poetry collection The Rising Fire.

Rosemary Sullivan chronicled MacEwen’s short life in Shadow Maker: The Life of Gwendolyn MacEwen (1995). Margaret Atwood drew on MacEwen’s personality and process to create the character Serena in her short story “Isis in Darkness.” Today, visitors to Toronto can pay tribute to the poet at the Gwendolyn MacEwen Park, in which stands her bust in memoriam. 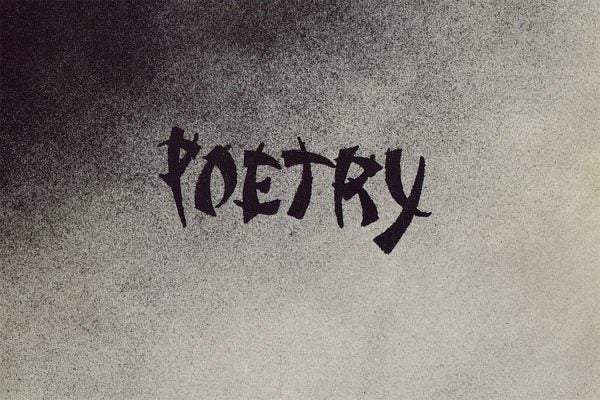