Plant of the Month: The Runner Bean

From Aztec medicinal remedies to Darwin’s study of flower pollination, local knowledge about the runner bean reveals the importance of biodiversity. 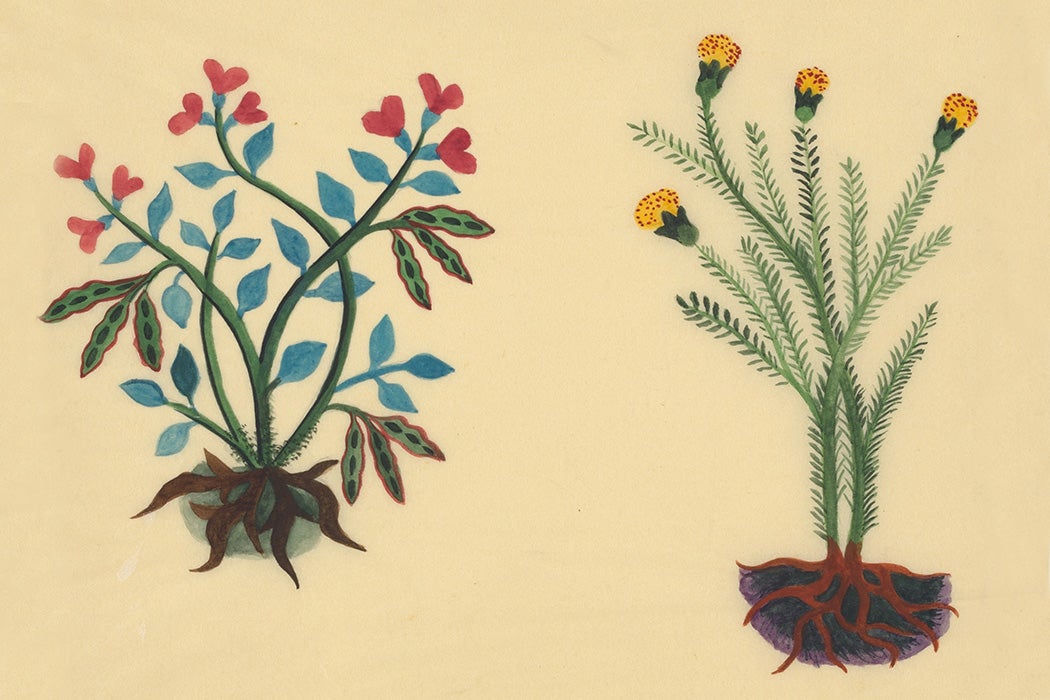 Accompanying a sixteenth-century watercolor of Ayecohtli, or scarlet runner bean (Phaseolus coccineus), is a recipe “for small animals which descend into the human abdomen.” The authors, two indigenous Mexica (Aztec) men named Juan Badiano and Martin de la Cruz, likely meant this as a treatment for intestinal parasites. They state that after putting the powdered beans in your mouth, taking a hot bath, and holding (but not swallowing) bitter water in your mouth, the “small animal” will be eliminated—either through vomiting or defecating.

The watercolor and recipe are found in a 1552 Mexica text, known as the Badianus manuscript. This manuscript is one of very few European-sponsored works written and illustrated by indigenous Mesoamericans in the early modern period. The paintings survive today both in the original as well as a handful of copies, including an early twentieth-century reproduction held by the Dumbarton Oaks Rare Book Collection in Washington, D.C. Investigations by the Plant Humanities Initiative have renewed interest in these beautiful illustrations, revealing the complex histories of seemingly ordinary plants.

Some of the earliest documented human use of beans (including Phaseolus coccineus) in Mesoamerica dates to between 7,000 and 5,500 years ago.

Since the creation of the Badianus, scientific study has confirmed aspects of the Mexica knowledge about runner beans in the manuscript. Seeds of species in the genus Phaseolus contain a protein called phytohaemagglutinin (PHA) that becomes toxic in larger quantities and can only be eliminated if the beans are properly cooked. So, when raw or undercooked beans are consumed by humans, the PHA remains and can cause diarrhea and vomiting. Whether these actions would expel a parasite has not been verified. But it is clear that if you are trying to avoid an evening in the bathroom, you should cook your beans thoroughly before consuming them.

As Phaseolus coccineus is indigenous to the Americas, the plant and its many virtues, medicinal and otherwise, were likely well known for thousands of years prior to European arrival. Some of the earliest documented human use of beans (including Phaseolus coccineus) in Mesoamerica dates to between 7,000 and 5,500 years ago. The runner bean has also been found at the famous archaeological site of Teotihuacan, suggesting the plant was being consumed there between 250–900 CE.

Separated from its native context and knowledge, the runner bean spread across early modern Europe, grabbing the attention of gardeners and farmers. The striking color of the plant’s beans and flowers, the ease with which they grow, their environmental adaptability, and their nutritional value have made Phaseolus coccineus a staple in household gardens and small farms, from Mesoamerica to Europe, to this day.

The runner bean might have remained in the often scientifically ignored corner of local kitchen gardens but for one of the world’s greatest scientific thinkers: Charles Darwin. In 1858, Darwin reported on experiments with and observations of the “Scarlet Kidney Bean,” likely a scarlet runner bean. He demonstrated that while the plants could fertilize themselves, they were more likely to fruit after being visited by vectors like insects or birds, which, as we know today, promote cross-fertilization by bringing pollen from genetically different plants. Known as allogamy, this type of reproduction tends to lead to greater diversity within a species.

Conversely, today’s commercial agriculture tends to favor low diversity through practices like monocropping: the large-scale production of a single species or variety. This requires a highly predictable crop, so producers often plant genetically homogenous seed populations. Because these are what fulfills market demand, big seed companies start favoring genetically static strains, too, and ultimately, diversity decreases within commercial plant populations. This is highly risky because, if local conditions change even slightly, homogenous gene pools can be wiped out if they do not have the trait needed to survive the new conditions.

Unlike commercial food crops, the runner bean has largely been cultivated by individuals for direct household use, both in Mexico and in Europe. Such small-scale farmers and gardeners typically maintain local seed varieties, which ends up preserving higher genetic diversity in their plant populations. The runner bean is perfect in these small-scale production contexts because its allogamous reproduction encourages gene recombination, making new traits more likely to pop up in the species. Small-scale producers take advantage of this diversity by encouraging and selecting for the varieties they prefer based on any number of local demands.

It is likely that we have millennia of gardening and farming to thank for today’s diversity of runner beans. Since Darwin’s study, researchers have observed several landraces and varieties of Phaseolus coccineus. There are runner beans with seeds and flowers of various scarlet shades, of course, but also some with bicolor flowers, and a variety with white flowers and seeds. These multiple varieties appropriately go by many names: butter beans, ayacote or yepatlaxtle (Nahuatl), botil (Tzeltal), judión de la Granja (Spanish), fasiola gigantes (Greek).

At a time when biodiversity is threatened, and climate change creates ever more uncertainty for farmers, the story of the runner bean is telling. It reminds us that there is beauty in the acceptance and proliferation of diversity and local knowledge. This is particularly true in gardens and small farms, where individuals can observe and select for traits that best serve local needs—whether they be for medicinal purposes, as demonstrated in the Mexica manuscript, or in response to today’s environmental issues, as with drought-resistant varieties. As a single species that takes a variety of forms, the runner bean has inspired individuals and cultures to diversify in their own backyards, contributing to a more vibrant and resilient world.