Dragon’s blood is all the rage now, but where does the scarlet resin come from? 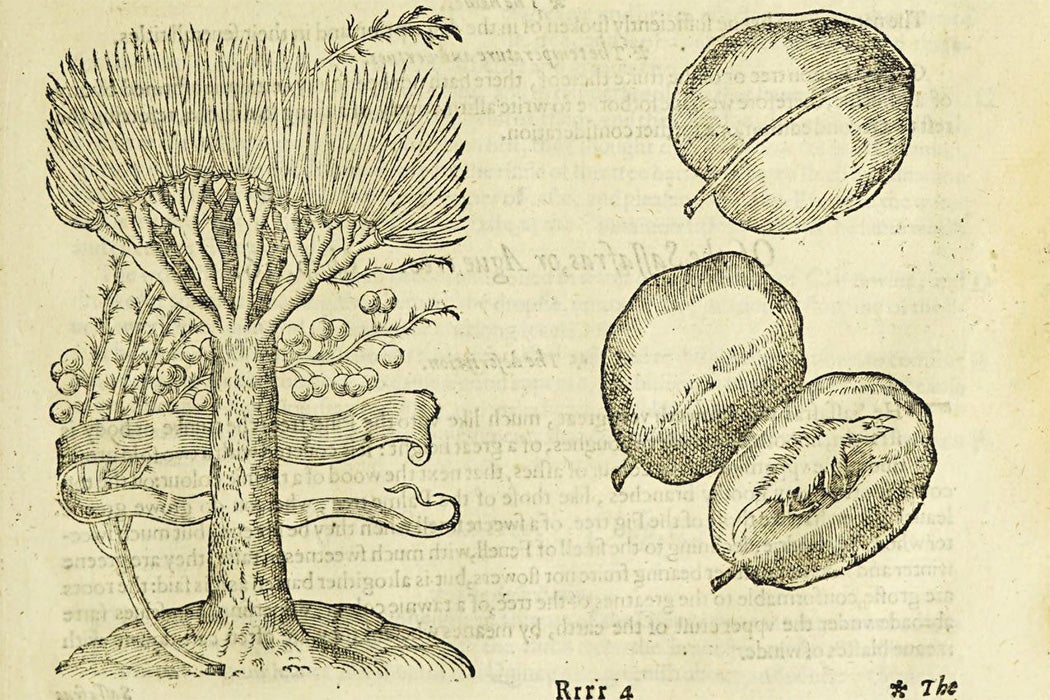 Googling “dragon’s blood” returns a number of premium skincare products promising to leave your skin feeling plumped, smoothed, and hydrated. But this blood-red resin, known to ooze out of the Amazon rainforest’s Croton lechleri, also called the Dragon Tree, has been around for much longer than the commercialization of cosmetics. It has also seeped from a variety of trees, not just in South America.

Today, different kinds of plants produce this red resin, and they have all become colloquially known as the Dragon Tree. Researchers at the Royal Botanic Gardens, Kew, and elsewhere have actively tried to solve the mystery of the types and origins of the dragon’s blood specimens they have in their collections. So far, we know that a number of plants bear red resin, each with its own history of use and trade.

In South America, along with the Croton genus, grow Pterocarpus plants, which are also found in the West Indies. Off the coast of northwestern Africa, the Canary Islands are home to Dracaena draco, and Dracaena cinnabari graces the Yemeni island of Socotra, in the Arabian Sea. Even Southeast Asian palms in the genus Daemonorops produce crimson resin. As modern scientists attempt to differentiate between plants, the Plant Humanities Initiative at Dumbarton Oaks encourages us to look to their histories, reminding us that our current investigations have precedent.

Pliny, for example, wrote about dragons inhabiting an island where the trees yielded red drops of cinnabar.

For example, in 1640 English botanist John Parkinson wrote of the Dragon Tree in his Theatre of Plants, a copy of which is held in the Rare Book Collection at Dumbarton Oaks. Besides extolling its ability to treat gonorrhea, urine difficulties, minor burns, and watery eyes, he reported that the tree was found to grow “in the Islands both of Madera, and the Canaries, and in Brassill.” But, Parkinson argued, “not any of the ancient Greeke or Latine Authors had any knowledge of this tree, or could give any description thereof.” These authors were aware only of a reddish gum or resin, “yet neither knew whether it came from herbe or tree, or was a minerall of the earth.”

But the ancients did write of a Dragon Tree. Pliny, for example, wrote about dragons inhabiting an island where the trees yielded red drops of cinnabar. According to an Indian legend, in a fierce battle, a dragon representing the god Brahma bit an elephant representing the god Shiva and drank its blood; as the elephant fell to the ground, it crushed the dragon, thus mixing the blood of both creatures to yield a resin-like substance.

Resin from the Socotra Dragon Tree became a commodity known as dragon’s blood in the ancient world, used in everything from dyeing wood and breath freshener to rituals and magic. An 1835 survey of Socotra by the British East India Company first labeled the tree Pterocarpus draco; then, in 1880, Scottish botanist Sir Isaac Bayley Balfour formally described and renamed the species Dracaena cinnabari.

The Dragon Tree that John Parkinson and his early modern colleagues were describing could have been Dracaena cinnabari or a different species within the same family: Dracaena draco. In Greek mythology, these “dragon trees” were believed to have emerged from blood flowing upon the land from the slain hundred-headed dragon Ladon. In 1402, French chroniclers Pierre Boutier and Jean Le Verrier, who accompanied Jean de Béthencourt on the conquest of the Canaries, gave one of the earliest descriptions of Dracaena draco in the Canary Islands. The indigenous Guanches worshiped the trees there and extracted the sap for embalming the dead.

All Dracaena trees possess unique features. They have a striking appearance, due in part to their densely packed, umbrella-shaped crown of stubby branches above a thick, bare trunk. In 1633, another English botanist, John Gerard, wrote in his Generall Historie of Plantes (also held at Dumbarton Oaks) that the Dragon Tree is a “strange and admirable tree [that] groweth very great.” Dracaena draco was also regarded for some time as the longest-living member of the plant world, although it does not have the annual rings that reveal age. When the famed explorer and naturalist Alexander von Humboldt visited Tenerife in 1799, he estimated that the Great Dragon Tree of Orotava—almost 21 meters tall and 14 meters in circumference—was 6,000 years old. While that particular tree fell in 1867, another one, thought to be a few hundred years old, still stands today.

Beyond their intriguing appearance and longevity, Dracaena draco and Dracaena cinnabari held a medical allure. Seventeenth-century herbals—texts that compiled the lore and usefulness of plants, such as the books by Parkinson and Gerard—reveal medicinal uses for the Dragon Tree. For instance, Gerard wrote that once pierced, the tree’s tough bark “yeelds forth drops of a thick red liquor, of the name of the tree called Dragon’s tears, or Sanguis draconis, Dragons blood.” This substance “hath an astringent faculty and is with good successe in the overmuch flowing of the courses, in fluxes, dysenteries, spitting of blood, fasting loose teeth.”

Medicinal value was part of why early modern naturalists keenly exchanged and collected samples of the Dragon Tree and its sap. In the late seventeenth century, prominent British collector Sir Hans Sloane enthusiastically placed remnants of this plant and resin into small glass boxes, which formed part of his botanic collection. Antony van Leeuwenhoek, a pioneer in the use of microscopes, wrote in 1705 of “a little Plant of Dragons blood” that he had received from the Leyden Botanical Garden. In a letter published by the Royal Society of London, Leeuwenhoek describes cutting the stalk lengthwise, which allowed him to see the “canals” that the “Red Sap” passed through.

The substances in such historical collections and their documentation in herbals attest to the long-held interest in the medical utility of the Dragon Tree and its bloodlike resin, as well as the importance of naming and identification. The current use of these substances in luxury skincare reminds us that modern science cannot be so easily disentangled from historical narrative. Today, as different Dragon Trees are threatened with extinction, their historical significance to researchers is even more important.