Plant of the Month: Agarwood

Agarwood has long been prized for its olfactory splendor. Its essential oil is even known as liquid gold today. 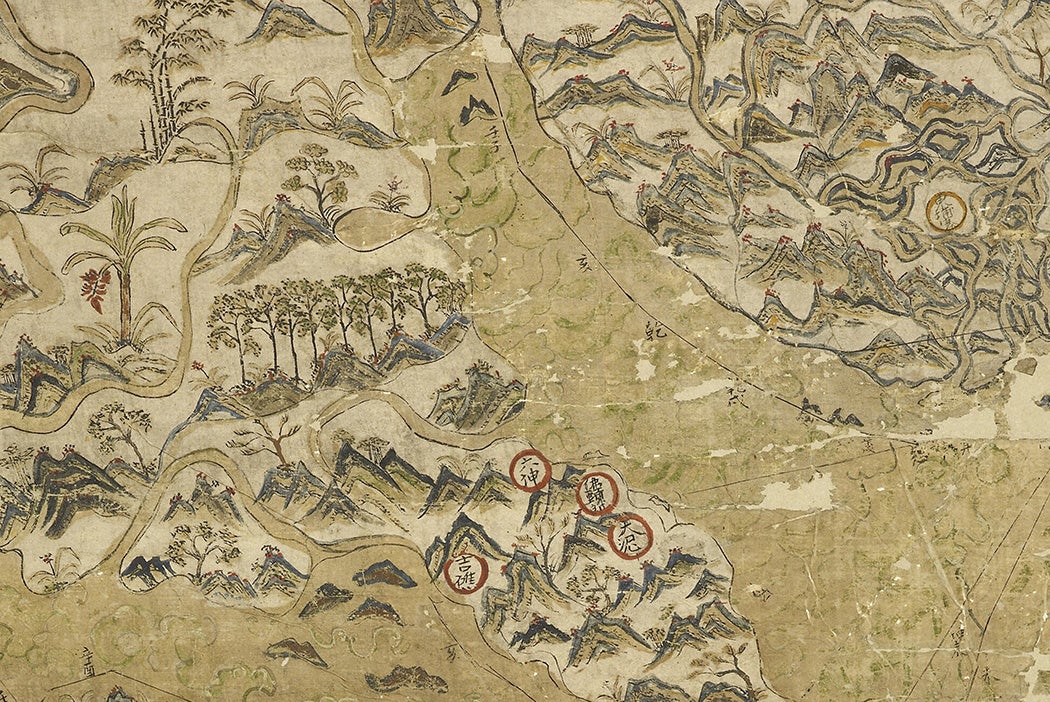 Detail from the recently rediscovered Seldon Map from the Bodleian Library (Bodleian Library, MS.Selden supra 105). This map of East and Southeast Asian shipping routes was one of the first
Chinese maps to reach Europe. In this detail we can see the economic significance of agarwood, which is depicted by a row of eight Aquilaria trees (the source of agarwood) on the Malay Peninsula.
By: Ashley Buchanan
6 minutes
Share Tweet Email Print

An anonymous handwritten note tucked away in an archival box of miscellaneous seventeenth-century travel accounts, news reports, and other disparate documents from the late Medici Court in the Florentine State Archive describes the use and value of a curious odorous wood. The note names the wood “Calambà” or “Lignum Aloes” and describes it as so valuable that the king of Cochinchina (a kingdom in present-day Vietnam) kept a piece the size of his palm in his treasury.

It is likely the note was originally paired with a letter and possibly even a piece of Calambà, today known as agarwood, and dispatched to the Grand Duke of Florence by one of the court’s agents in Southeast Asia. The Medici Grand Dukes of Florence were known for their collections of exotic naturalia. Agarwood, used in medicines as well as incense and perfumes across Asia and the Near East for centuries, would have been a rarity and a welcome addition to the Medici collections. In fact, a contemporary catalogue of a Milanese cabinet of curiosities notes that Grand Duke Ferdinando II de Medici (1610–1670) purchased a large piece of agarwood for 4,000 ongari (a type of gold coin).

It is hard to translate this extraordinary price tag into a dollar amount today, but you can get a sense of just how much it was by looking at the average daily wage of a worker in Florence at the beginning of the seventeenth century. Economic historian Richard Goldthwaite estimates that in the year 1600 the average daily wage in Florence was 20 soldi. Approximately 140 soldi equaled 1 gold florin. If the average Florentine worker earned approximately 52 florins in a year, it would have taken them nearly 77 years to earn enough to purchase the Grand Duke’s piece of agarwood. Fast-forward three centuries and agarwood remains one of the most expensive woods in the world. First-grade agarwood can cost as much as $100,000 per kilogram.

Agarwood was prized well beyond early modern Italy. To quote the eighteenth-century British naturalist John Ellis, it had long been “precious in the East.” The earliest use of agarwood is recorded in the four Vedas of ancient India (approximately 1500–1000 B.C.E.). It was used as a religious offering as well as a fragrant smoke that was thought to facilitate spiritual connections. It was also used by the nobility to perfume their homes and signal wealth. From India, taste for and customs associated with agarwood traveled east and west along the Silk Road, an ancient network of trade and commerce that stretched from southern Europe to East Asia. As it traveled west, agarwood was incorporated into Christian and Islamic cultures as both medicine and incense and, by the time of the late Medici Court, also as an exotic object of natural history.

It was agarwood’s introduction to China and Japan, however, that would transform the fragrant substance into one of the world’s most prized and expensive woods for more than a millennium. Agarwood was first introduced to continental China from Southeast Asia sometime in the third century and was integrated into local incense and perfumery traditions. In southern China, agarwood was considered a prestigious luxury and quickly became an important import. Anthropologist Dinah Jung argues that the “gradual establishment of Buddhism in China supported the promotion of agarwood, since this movement generally emphasized the positive value of fragrance(s).” The rise of Buddhism only increased the significance of agarwood as incense became increasingly tied to religious practices. By the twelfth century, the value of agarwood had become equal to that of silver in southern China and across Southeast Asia.

In their natural state, the trees that produce agarwood are no more costly or desired than any other tree in south and southeast Asia.

Use of agarwood spread alongside Buddhism, and both reached Japan around the sixth century. By the eighth century, agarwood had become a crucial scent in Japanese incense ceremonies called kōdō. These elegant aristocratic rituals centered on enjoying, discerning, making, and judging the qualities of different aromatics. In Japan, there is even a large piece of ancient agarwood, called Ranjatai, that is still revered today; it is said to have been a gift from the Chinese to court to the Emperor Shômu (724–748 C.E.). Today Ranjatai is housed in the treasury of an important Buddhist temple and placed on display for special occasions.

Thanks to its rarity and inaccessibility, the odorous wood has a long history as a luxurious and spiritual substance. But in their natural state, the trees that produce agarwood are no more costly or desired than any other tree in South and Southeast Asia. The product of a microbial fungal infection, agarwood is actually a fragrant, dark, resinous wood formed in the heartwood of trees of the genus Aquilaria, which are native to the rainforests of Indonesia, Thailand, Cambodia, Laos, Vietnam, Malaysia, Northeast India, Bangladesh, the Philippines, Borneo, and New Guinea.

When a tree is injured or infected with fungus, an immune reaction sets in, producing stressed-induced aromatic resins, called aloes, in its heartwood. Over the course of several years, the aloes slowly embed in the heartwood, creating agarwood. The tree is then cut down and the pieces of agarwood are extracted by hand. In natural forests only 7 percent to 10 percent of Aquilaria trees become infected and produce agarwood. Unfortunately, without an experienced local specialist, the presence and quality of agarwood can only be assessed by felling the trees.

Making matters worse, demand for agarwood has increased over the past ten years, as the ancient scent has become newly fashionable in the international perfume industry. Pieces of agarwood are distilled into an essential oil, nicknamed liquid gold, to become a common ingredient in high-end perfumes. Increased demand for agarwood essential oil has led to not only an increase in prices and cultivation and a reduction in product quality, but also a heavy impact on Aquilaria populations.

To meet market demand for agarwood in the United Arab Emirates, Saudi Arabia, Hong Kong, Taiwan, and Japan, producers have resorted to purposely infecting Aquilaria trees with fungi to increase agarwood production. Researchers have even conducted experiments to evaluate the most effective potential fungal inoculant in the hopes of increasing agarwood production on plantations and reducing the threat to wild populations of the tree. Although it is illegal to harvest wild Aquilaria trees in most Southeast Asian countries, all varieties of Aquilaria trees are listed as critically endangered on the International Union for Conservation of Nature (IUCN) Red List. Conservationist Joachim Gratzfeld and botanist Bian Tan argue that in order to save the Aquilaria genus and fight illegal smuggling, a delicate balance needs to be struck between cultivating and conserving the trees and supporting the local communities that depend on this natural resource for their livelihoods.

Unfortunately, the scarcity of Aquilaria trees has only increased the prestige, demand, and cost of agarwood. Yet that demand needs to be balanced against the loss of biodiversity. The IUCN warns that combating threats to the global environment and climate change is not as simple as lowering carbon dioxide and emissions. Biodiversity is equally important. The loss of some twenty Aquilaria species would have irrevocable impacts on the ecosystems of South and Southeast Asia’s tropical rainforests as well as the economies and communities that depend on those ecosystems for food and their livelihoods. By highlighting the complex cultural history of agarwood, the Plant Humanities Initiative records the fascinating and changing values that human cultures have ascribed to plants, and the irreplaceable and enduring value of the ecosystems on which we depend.