Will the real Civil War photographer please stand up? 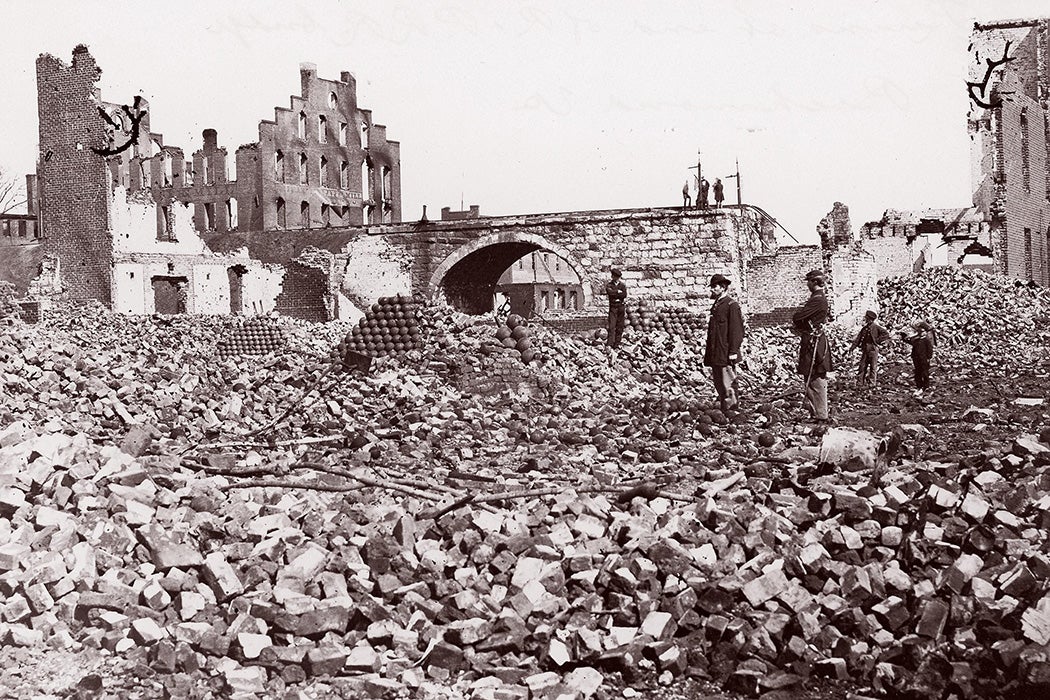 A photograph of ruins at end of Richmond and Petersburg Railroad Bridge, Richmond, by Andrew J. Russell, formerly attributed to Mathew Brady, between 1861 and 1865
via JSTOR
By: Matthew Wills
3 minutes
Share Tweet Email Print

Mathew Brady’s actual birthday is unknown, but his bicentennial is being celebrated generally throughout 2022. Brady is famed for his photographs of the American Civil War, including then-shocking images of corpses on battlefields. Virtually every photograph of the war is assumed to be his, which complicates his legacy, especially, as scholar Susan E. Williams writes, “he may never have actually operated a camera in the field.”

The credit lines “Photograph by Brady” or, in illustrated publications of the day, “from a photograph by Mathew Brady” have resulted in more than 12,000 photographs of the Civil War being credited to him, even when he wasn’t at the camera. But perhaps it’s best to think of Brady as an impresario, director, or project manager, rather than as an actual war photographer. As entrepreneur and publicist, he was his own brand. He had more than two dozen photographers working for him. He copyrighted their prints and sold them from his studios in New York and Washington, DC.

The “Brady myth” has subsumed at least one photographer who did not work for him at all.

Historians know the names of several of Brady’s photographers, including Timothy H. O’Sullivan, who went on to fame photographing the American West. But, as Williams explains, the “Brady myth” has subsumed at least one photographer who did not work for him at all.

This is the case of Union Army Captain Andrew J. Russell (1829–1902). With a background in painting landscapes and portraits, Russell initially helped the war effort by painting a diorama that travelled around New York to encourage enlistment. Russell himself mustered into the Union Army in September 1862, along with a company of New Yorkers recruited by him. In March 1863, he was appointed an official military photographer, establishing the US Military Railroad Construction Corps’s photographic department in the railroad roundhouse complex in Alexandria, Virginia.

“He furnished an insider’s view of the technology, infrastructure, and transportation systems employed to move troops into battle; to supply food, clothes, forage, shelter, guns, and ammunition; to house the wounded; and to bury the dead,” notes Williams.

Here’s where it gets complicated. Some of the pictures in Russell’s United States Military Rail Road Photographic Album are identical to photos credited to Brady in the National Archives. Russell’s album was given to the Virginia Historical Society in 1932 by his former supervisor. Earlier scholars wondered if Russell was one of Brady’s contract photographers, like Egbert G. Fowx, who taught Russell the new collodion wet-plate photo process.

Unlike Russell, Fowx was a civilian working with permission to photograph and sell images of the war from the Quartermaster General. When Brady visited the front, Fowx worked for him. (The famous “Brady” photo of Ulysses S. Grant leaning against a tree was taken by Fowx.) Because Fowx and Russell occasionally worked side-by-side, some of their pictures, as, for example, of the ruins of Richmond, are similar.

But Russell’s pictures have nothing to do with the Brady studio system. The misattribution of Russell’s images shows just how large the shadow of the Brady brand has loomed over photographic representation of the war. Even official government photographs were assumed to be his.

After the Civil War, Russell spent three years photographing construction of the Union Pacific Railroad. His “Champagne Photo” of Union Pacific and Central Pacific railroad crews celebrating the driving of the last, “Golden Spike” at Promontory Summit, Utah, on May 10, 1869, is one of the most famous in American history.

In Williams’s elucidation, Andrew J. Russell’s work can now be seen in its own right.