“No Unescorted Ladies Will Be Served”

For decades, bars excluded single women, claiming the crowds were too “rough” and “boisterous” and citing vague fears of “fallen girls.” 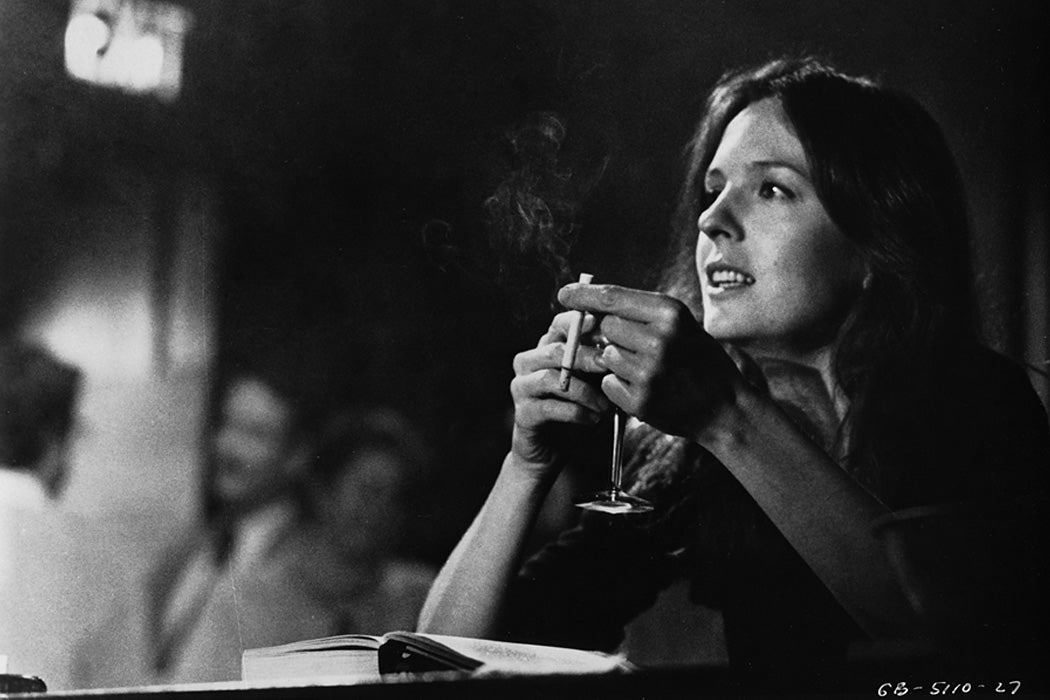 In early February 1969, Betty Friedan and fifteen other feminists entered the Oak Room of the Plaza Hotel in New York City. Like many other hotel bars and restaurants, the Plaza excluded women during weekday lunch hours, from noon until three, so as not distract the businessmen from their deal-making. But Friedan and the group of activists walked past the maître-d’ and gathered around a table. They held signs that said “Wake up PLAZA! Get with it NOW!” and “The Oak Room Is Outside the Law.” The waiters refused to serve the women and silently removed their table.

“It was only a probing action,” wrote Time, “but it shook the very foundations of the fortress.” Four months after the protest, following a barrage of press coverage, the Oak Room overturned its sixty-year policy of prohibiting women.

The right to drink alongside men was symbolic of the chance “to function as an autonomous adult in a free society.”

The action was part of a coordinated, nationwide effort by feminist organizers. During “Public Accommodations Week,” groups of activists from the National Organization for Women (NOW), spearheaded by Syracuse chapter leader Karen DeCrow, staged “eat-ins” and “drink-ins” to protest the bans on women in public establishments, in cities from Pittsburgh to Atlanta. It marked the first serious challenge to a long legal and social tradition of gender exclusion in America.

Feminists framed the issue of male-only accommodations as a civil rights violation, akin to racial segregation. African American NOW member Pauli Murray referred to gender discrimination as “Jane Crow.” Exclusion from the sites of commercial and political power-broking, feminists argued, contributed to their status as second-class citizens. As the historian Georgina Hickey explains in Feminist Studies, they saw the restrictions as a “badge of inferiority” that circumscribed their lives and opportunities. The right to drink alongside men was symbolic of the chance “to function as an autonomous adult in a free society.”

Following NOW’s victory at the Plaza, places like the Polo Lounge in Beverly Hills, the Berghoff bar in Chicago, and Heinemann’s Restaurant in Milwaukee, encountering complaints and picketing, also reversed their male-only policies. But other bars locked their doors or ordered their staff to ignore female customers. These owners dismissed the feminists as “troublemakers” and “zealots,” and drew upon the “common sense” notion that respectable women would have no interest in socially trespassing into the male domain.

Those against the feminist campaign were armed with an array of reasons for denying women equal access to accommodations. Some suggested that women lacked the ability to calculate the check and tip correctly, that bar crowds were too “rough” and boisterous for them, or that male-only spaces were sacred respites for politics and sports talk, where men could share “lewd stories” or “have a quiet beer and tell a few jokes.” The manager of Biltmore in Manhattan insisted that businessmen’s conversations were simply “not for women.” Bars were, in Hickey’s words, the “last stronghold of masculinity” in the early 1970s, an oasis for men during an historical moment marked by the transformation of gender norms. Government officials sometimes reinforced this notion: One Connecticut State Representative claimed that a bar was the only place a man could go “and not be nagged.”

Such facile justifications made for good soundbites and newspaper quotes during the decade of the “battle of the sexes,” but they obscured the more entrenched set of cultural beliefs about female sexuality behind America’s long history of sex segregation.

The History of Policing Single Women in Public

Since at least the turn of the twentieth century, when young, single women began to venture into America’s new urban establishments in large numbers, their presence in public was challenged. Unsurprisingly, men had greater freedom to enjoy the novel amusements of city nightlife, which included dance halls, bars, hotels, and theaters. Even women who had not committed crimes against people or property could be arrested for violating the “social and moral order,” which meant drinking and associating with male strangers, Hickey points out.

In cities like Atlanta, Portland, and Los Angeles, coalitions of police departments, city councils, business groups, and evangelical reformers were responsible for criminalizing women who socialized without a chaperone. They warned of a “life of vice” in disease-ridden brothels, where “fallen girls” were “beaten by their so-called lovers or keepers, and often drunk or sick.” This anti-prostitution rhetoric, couched in language of protection, as well as the need to maintain “a clean community” was used to justify police surveillance of women in public.

Women fraternizing outside of their race always drew extra attention and punishment from authorities, due to fears of miscegenation. And while white women were seen as vulnerable and in need of saving from moral ruin, black women—arrested at higher rates—were targeted out of a concern that enjoying liquor and recreation would detract from their productivity as domestic workers. These deep-rooted ideas about sex and race were baked into the policies that second-wave feminists confronted decades later.

Ironically, women had a brief chance to enjoy liquor in mixed-sex company during prohibition. The underground speakeasies of the 1920s, operating outside of the law, were largely co-ed. But after prohibition ended in North America, cities in both Canada and the United States attempted to “morally engineer” public drinking, and consistently regulated female behavior more than male behavior. Unattached women at bars could be kicked out for “intoxication,” even if they didn’t have anything to drink. Some states refused to grant licenses to mixed-sex establishments, and many American cities drafted their own ordinances to outlaw women in saloons and taverns. These establishments posted signs that read “men only” or “no unescorted ladies will be served.”

In Vancouver, the historian Robert Campbell explains, most beer parlors had separate areas – divided by partitions – for men and women, “to prevent temperance groups from being able to damn parlours as havens for prostitutes.” In the 1940s, the barriers between the sections were required to be at least six feet high and “permit no visibility.” But even with guards hired to patrol the separate entrances, unattached women occasionally wandered into the men’s section. Such women were considered “indecent,” akin to prostitutes. When the government sent undercover investigators to various bars and hotels, looking for “women of easy virtue,” they found enough evidence (“some looked as if their professions were more ancient than honorable,” one investigator noted) to ban single women altogether. Such a broad understanding of prostitution undergirded the defense of male-only spaces for decades.

Particularly during wartime and the years following it, to go to a bar as a single woman meant to have your character and morals questioned. In the 1950s, politicians and the press orchestrated a campaign against “b-girls” or “bar girls,” the terms given to women who solicited drinks from male bar patrons using flirtation and the implied promise of sexual intimacy or companionship. The b-girl, who the historian Amanda Littauer, writing in the Journal of the History of Sexuality, calls a “deceptive, professional barroom exploitress,” was seen as sexually devious, a master of subterfuge, and she was targeted by police and liquor control agents. Postwar newspapers used her as a symbol in their sensationalistic, often lascivious exposes of urban vice.

For the offense of cavorting with men in taverns, such women faced police harassment, arrest without bail, mandatory venereal disease testing, and even quarantine.

In earlier decades, b-girls had been seen as potential victims of “white slavery,” but by the 1940s they were cast as the villains, out to fleece and extract money from innocent men, especially soldiers. They were lumped in with “victory girls, khaki-wackies, [and] seagulls,” other categories of women, writes Littuaer, whose “promiscuity… warranted criminal sanction.” For the offense of cavorting with men in taverns, such women—whose sexuality was dangerous because it was too adjacent to prostitution—faced police harassment, arrest without bail, mandatory venereal disease testing, and even quarantine.

In 1950s San Francisco, b-girls were accused of “infest[ing] many of the city’s bars.” The Alcoholic Beverage Control Board protested their “despoilment” of “proper barroom atmosphere,” and claimed that bar patrons were “peculiarly susceptible to the importunings of the female of the species,” essentially defining public welfare in male terms. When police harassment failed to run the b-girls out of town, the city passed laws forbidding unescorted women in bars. These were notoriously difficult to enforce, but the careers of anti-vice politicians ultimately benefited from the war on illegitimate female sexuality.

By the 1960s, women could find selected places to go for a drink in some parts of the United States, but the majority of bars remained closed to them. There were two main kinds of male-only establishments: upscale downtown bars—typically connected to hotels—that were populated by well-off traveling businessmen, and the more casual working-class neighborhood pubs. “Any tavern in New Jersey fit in this [second] category,” observes Hickey. Both types of spaces catered to men hoping to unwind and escape their domestic lives. Adding single women to the equation threatened to contaminate such spaces with sexual temptation.

When direct action and press coverage failed to fully eliminate restrictions on women, feminist and civil rights lawyers filed suits to compel bars to change their policies. In 1970, attorney Faith Seidenberg won a federal suit against McSorley’s Old Ale House in New York City, which hadn’t admitted women in its entire 116-year history. It thrived by cultivating an explicitly “manly” saloon atmosphere. The landmark ruling prompted Mayor John Lindsay to sign a bill outlawing gender discrimination in public places. But overall, lawsuits yielded mixed results for activists, and ultimately, amending state and local ordinances, rather than seeking change through the courts, proved to be the winning strategy. By 1973, few public spaces in America remained male-only.

Sex-segregated bars now seem like a relic of a more regressive time, but the days of gender exclusion in public accommodations may not, in fact, be completely behind us. Recent news items have suggested that some restaurants and hotel chains are cracking down on single women drinking and vacationing alone, due to familiar concerns over prostitution and sex trafficking.

This may be a consequence of the blind spots in earlier feminist organizing. Back in 1969, when Friedan and company sat under the opulent Bavarian frescos and twenty-foot high ceilings of the Oak Room waiting for service, they were playing into the politics of respectability. By and large, second-wave feminists focused on upper-middle class, white professionals, so they rarely defended sex workers. In one demonstration, DeCrow brandished a sign that read, “Women Who Drink Cocktails Are Not All Prostitutes.” Many in the feminist movement staked their claim to equality on a narrow definition of “proper” womanhood. For all their successes, this strategy meant that the specter of the unescorted “lewd woman,” as either a victim or a predator (depending upon her race and the political purposes of the charge), is still intact today. 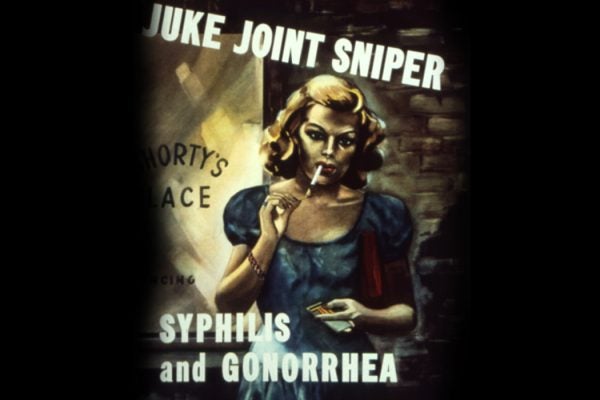 From WWI to the 1950s, the "American Plan" rounded up sexually-active women and quarantined them, supposedly to protect soldiers from venereal disease.