The African American opera singer made history with a stirring concert at the Lincoln Memorial. But there was much more to Marian Anderson. 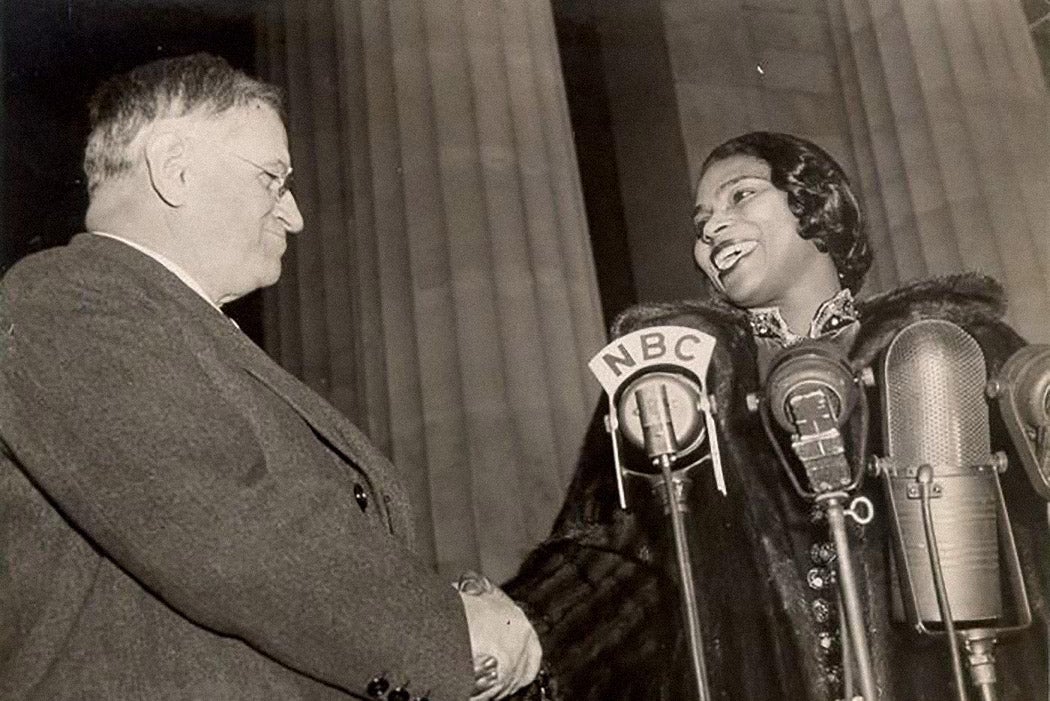 When opera singer Marian Anderson stood on stage at Washington, D.C.’s Constitution Hall on October 24, 1964, it was the first stop on her international farewell tour, but it was also a reclamation. The hall had been the scene of another battle in the nation’s long and painful struggle for equity: In 1939 the owners of the venue, the Daughters of the American Revolution, refused to allow Anderson to perform.

As Seth Feman writes in American Art, the DAR “barred her from their ‘white artists only’ venue, […] and then the District of Columbia Board of Education spurned efforts to stage her performance at a white school.”  Instead, Anderson performed on the steps of the Lincoln Memorial. The event was memorialized in several photos, including some that are part of the University of Pennsylvania’s Marian Anderson Collection of Photographs, now available through JSTOR’s Open Community Collections.

Anderson’s life was full of groundbreaking moments. Her presence in many spaces that had previously been all-white was powerful. But what may be lost in making her story solely about her challenges in a racist society is her talent. Anderson was, as conductor Arturo Toscanini put it, a voice “one is privileged to hear only in a hundred years.”

Anderson was born in Philadelphia in 1897. Her natural musical talent was always evident and supported by her community. But as Nina Sun Eidsheim explains in American Quarterly, reaching the next level was difficult because “racism and financial difficulties obstructed her efforts to obtain musical training.” Members of her church offered to pay her way through a local music school, but “she was turned away: the school ‘[didn’t] take colored.’” In 1919 she found an instructor, Giuseppe Boghetti, a graduate of the Royal Conservatory in Milan. Boghetti not only had the skills to take her to the next level, he also had valuable connections that would help her advance.

She began touring the South during this time, but the inequities of Jim Crow–era America made this difficult. She’d understood the realities of racism, Anderson wrote in her autobiography, “but meeting it bit deeply into the soul.”

Wanting to expand her opportunities, Anderson began touring Europe, cementing her reputation worldwide. Capitalizing on her rising fame, her manager arranged the concert at Constitution Hall. Even though Eleanor Roosevelt, one of the DAR’s most notable members, publicly resigned her membership and condemned the organization’s actions, it didn’t relent, leading to the historic and now iconic performance at the Lincoln Memorial.

The power of images of Anderson, from that day and so many others, is often traced to that moment. As Feman writes, “[W]e will not soon forget that the recital represents an important victory in what has been a long, difficult fight for justice.” It’s hard, he continues, to see “any other news picture of Anderson from that day, perhaps any image of Anderson at all, in any other way.”