Margaret Cavendish, Duchess of Newcastle-upon-Tyne, shocked the establishment by publishing poems and plays under her own name. 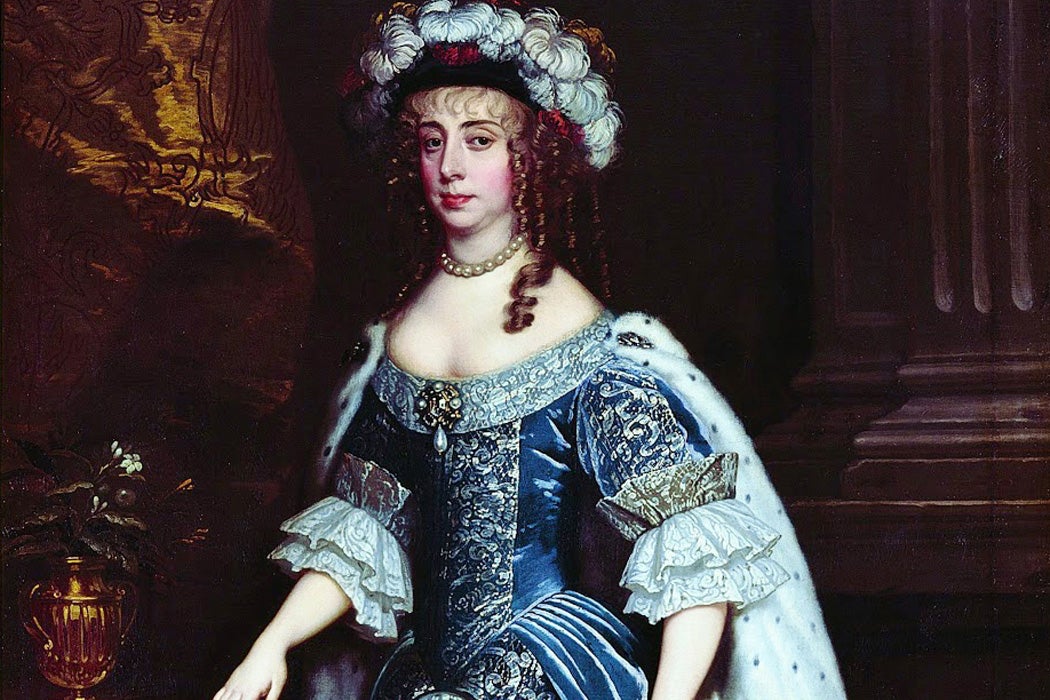 Margaret Cavendish (1623-1673) was a phenomenon: royalist, philosopher, duchess, writer, and more. Virginia Woolf colorfully described her as “a giant cucumber…noble and Quixotic and high-spirited, as well as crack-brained and bird-witted.” Cavendish’s enemies called her “Mad Meg.” “I do not like her at all,” humphed Samuel Pepys. Who was this woman who inspired such strong responses?

Cavendish was a poet, essayist, utopian, and pioneer of science fiction. Significantly, she published under her own name, which was rare for a woman at the time.

One topic on which Cavendish was less progressive was, ironically, the nature of women.

Titles of her poems—”A World Made By Atoms,” “All Things Are Governed By Atoms,” “Of Vacuum,” “The Motion of the Blood,” “Of Stars,” “The Circle of the Brain Cannot Be Squared”—attest to her fascination with the science of the day. But she wasn’t simply a science communicator: she challenged the big boys. She is said to be the first woman to attend a meeting of the Royal Society in 1667.

One topic on which Cavendish was less progressive was, ironically, the nature of women. Scholar Deborah Boyle explores Cavendish’s contradictory thoughts on the subject. The debate about the nature of women—and men—was long-standing when Cavendish started writing in 1650s. Cavendish argued that gender roles were not fixed and immutable, as many believed. She posited that women needed better education, but, Boyle writes, this was still within a traditional perspective: “She also thought that education should reinforce the feminine virtues.”

Cavendish held that women are naturally inferior to most men; that women, like other parts of nature, are free and thus are not necessitated to act in traditionally feminine ways; but that despite this freedom, for a woman to act in unfeminine ways is in a certain sense unnatural.

She was, in short, conservative. Perhaps that’s not surprising for a member of the aristocracy who had gone into exile with the coming of the Commonwealth and whose husband reclaimed his estate with the Restoration. Cavendish’s flamboyance went along with her privileges.

Cavendish was, however, critical of “the ways in which men abuse the power they have” in marriage. But according to Boyle, Cavendish pessimistically concluded that “patriarchal marriage is simply unavoidable, no matter what efforts women make to avoid it.” Practically all the women in Cavendish’s plays end up married, regardless of the points they score against marriage earlier in the dramas.

Boyle notes that in recent years Cavendish has been “described as a feminist.” Boyle disagrees with this ahistorical assesment, citing Cavendish’s acceptance of the reigning belief in the “natural” inferiority for women. Cavendish was “aware of the ways in which male power over women limited women’s options, and to that extent she could perhaps be described as a proto-feminist.” Which, considering the times, was a lot.

She was certainly ahead of her time. Now a recent novel about her, along with a new selection of her poetry, may bring Cavendish’s unusual work to a new generation of readers.