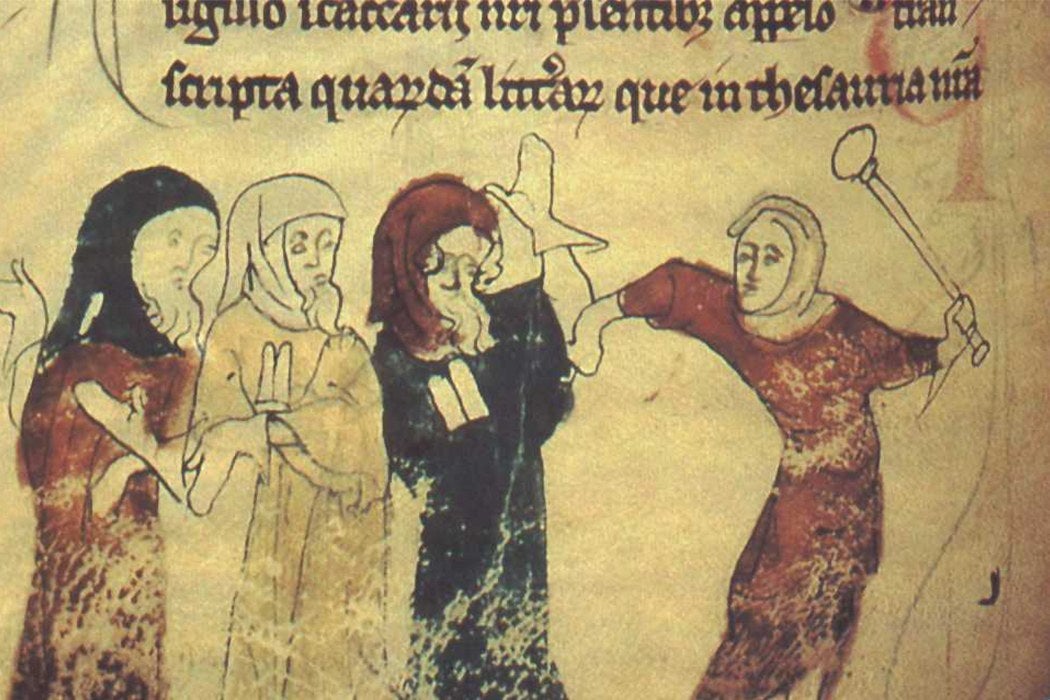 William the Conqueror first brought Jews to England from Rouen (now the north of France) shortly after 1066. Hugely ambitious but chronically short of cash, Norman kings desperately needed the Jews’ renowned financial resources and networks to stimulate economic development as well as to finance their personal campaigns and pet building projects.

At the time, Jews were considered chattels of the king, under his control but also entitled to royal protection. They were not allowed to leave the country without permission, but they could travel freely and settle in English towns of their choosing. By 1200 there were approximately 4,000 to 5,000 Jews in England. Marginalized in both the Norman and Saxon worlds, Jews settled together and lived in close communities of 50 to 200 people, usually close to an urban center with a castle, such as Winchester or Oxford. To Jews, the castles served as refuges during times of persecutions, administrative centers, seasonal residences for powerful clients, and even prisons.

As many as 10 percent of loans recorded in the English king’s rolls of the time were made by Jewish women.

History chronicles that Jews of medieval and Renaissance Europe were relegated to moneylending because of Christian prohibitions on the practice of usury—lending money at interest. Our collective imagination has been shaped largely by Shakespeare’s iconic Shylock, the male antagonist in The Merchant of Venice, who embodies the noxious stereotype of the Jewish moneylender. What few probably know is that as many as 10 percent of loans recorded in the English king’s rolls of the time were made by Jewish women, many of whom became well-known moneylenders in their own right, and not mere adjuncts of their husbands.

Often Jewish women were the sole supporters of their households (as they still are in some ultra-Orthodox families today), enabling men to study the Torah and pray, necessary activities in Orthodox Jewish life. Unlike ladies of the ruling Norman class, who under English common law had no legal status apart from their husbands, even married Jewish women conducted business and represented themselves in the courts. A Jewish bride received a dowry, which often remained under her personal control, and in many instances, may have constituted seed money for starting a business.

Notable female lenders included Avigay of London, Chera of Winchester, Mirabel of Gloucester, Belaset of Bristol, Comitissa of Cambridge, and Licoricia of Winchester—one of the most successful and glamorous female Jewish lenders of her time.

The story of Licoricia of Winchester illustrates just how much wealth and influence a Jewish woman could accumulate. She made friends in high places and was frequently received at the court of King Henry III (son of King John of Magna Carta fame). Licoricia and her ilk traveled widely on horseback or in carts, richly clothed, and accompanied by armed escorts. She lent money to individuals in all strata of society, bankrolling illustrious nobles like the king’s brother-in-law, Simon de Montfort, before his downfall. She also did small financing for farmers and lesser barons, informal pawn broking, and household lending to local gentile women.

Little to nothing is known about Licoricia’s early life. She was probably born in the early part of the century and first appears around 1234 in records of the city of Winchester as a young widow with a thriving business. Her first husband was the relatively obscure Abraham of Kent, with whom she had three sons, Benedict, Cokerel, and Lumbard. After Abraham’s death, Licoricia carried on her business, continuing to accrue wealth and influence. Eventually she crossed paths with David of Oxford, an equally well-connected financier who would become her second husband.

We can only speculate whether Licoricia and David were a love match or a practical gambit by two seasoned entrepreneurs—probably a bit of both. But we do know their partnership exposed them to scandal, as David was still married to his first wife, Muriel, when he courted Licoricia. Muriel delayed divorce by appealing to the Jewish halachic court, the beth din. Although the Paris beth din summarily declined David’s petition for divorce, King Henry intervened at his request, denouncing the French rabbis’ veto and decreeing no one should interfere with the divorce. Thus, David and Licoricia were at last permitted to marry without threat of excommunication from the Jewish community.

Immediately upon David’s unexpected death in 1244, King Henry sent Licoricia to the Tower of London…

Although the two continued to conduct business separately, their marriage in 1242 effectively created a 13th-century power couple. Alas, David lived only two years after he and Licoricia married, just long enough to give her another son, Asher, nicknamed Sweteman for his reputedly pleasing disposition. Immediately upon David’s unexpected death in 1244, King Henry sent Licoricia to the Tower of London while his accountants assessed David’s estate and exacted the king’s official one-third portion. This was standard procedure. In the case of David’s estate, it is estimated that the total remittance of 5,000 marks would equal as much as 2.5 million pounds (almost 4 million American dollars) in today’s money. Licoricia, confident that she would receive her dowry back, plus the amount specified as her inheritance in the ketubah (the Jewish marriage contract), endured her time in the Tower with aplomb, and upon her release, she went back to business as usual. At about the same time, David’s first wife, Muriel, as part of her divorce settlement, received a house just around the corner from David’s home, “at the top of the Great Jewry, near Carfax,” in Oxford. It is suggested that her continued residence there may have prompted Licoricia’s eventual return to Winchester, the home of her youth, after David’s death.

Although not confined to ghettos, Jews chose to live together in their own cultural centers. Many English cities still have a street or section called the “Jewry.” Moneylenders and other magnates sometimes offered their homes for use as community synagogues; services were held in the back of the house. Since 13th-century finance was conducted in coin, which had to be locked up and guarded, a successful moneylender’s home would feature a cellar fortified against thieves and marauders.

In the 13th century, even a female financier had to be “ruthless, astute, and unscrupulous,” and Licoricia was no exception. She was involved in her share of disputes and allegations of shady dealings. The most well-known one involved Thomas of Charlecote, who sued Licoricia in 1253, accusing the wealthy financier of charging excessive interest on a loan to his by-then-deceased father, forcing the elder to default, then foreclosing on his estate, and forging documents.

Although likely guilty of at least one of the allegations, Licoricia parried by publicly accusing Thomas the younger of murdering his own father and forging the deed. Once again, the king himself came to Licoricia’s aid. It was, after all, in his interest to enhance the royal incomes. While Charlecote ultimately won, we can hardly doubt that the king’s favor helped to ensure that Licoricia got off with only a small fine, and she continued to prosper.

Licoricia’s empire represented not only a good deal of money but also a wide geographic network. She is well represented in the exchequers’ rolls in counties across southern England. After 1276, Licoricia herself no longer appears in any records; however, each of her sons continued referring to himself and doing business as a “son of Licoricia”—even Asher, son of the famous David of Oxford.

An Unsolved Mystery and a Family in Decline

Despite her success, Licoricia’s end was tragic. In 1277, 13 years before the Jews’ final expulsion from England under Edward I, she was found dead in her home, stabbed in the chest beside the body of her devoted female Christian servant, Alice. Locks had been broken off of coffers and strongboxes, and goods were missing, making the crime appear to be motivated by greed. Three men were eventually indicted, but none of them was convicted, and the murder was never solved.

A couple of years after her death, Licoricia’s eldest son, Benedict, who had accumulated a sizable fortune in his own right before inheriting the bulk of his mother’s estate, was accused and convicted of coin clipping (illegally shaving metal from gold and silver coins) and summarily hanged. Lumbard, the youngest of her sons by Abraham of Kent, was, by comparison, somewhat of a ne’er-do-well. We know little about him, but he seems to have drifted from bad debts to petty crime before disappearing in the record. Asher, Licoricia’s son with David, became a financier like his illustrious parents and did very well, but he was driven from England in the expulsion of 1290.

A People Without a Country

Despite the royal favor bestowed on a few influential financiers, the Norman kings were never friends to the Jews. They used and exploited them, exacting outrageously high taxes, called a tallage, on Jewish incomes. On a whim, the king could—and regularly did—cancel Jewish-held debts to curry favor with unruly nobles. In the years leading to the expulsion, the hostile Crown, under Edward I, enforced many pogroms and tribulations on the Jews, making it nearly impossible to do business or survive. Some starved or were forced to convert to Christianity. When finally ordered to leave England on pain of death, Jews were allowed to take with them cash and personal property. However, their debts were again cancelled and the Crown seized their real estate, cemeteries, and synagogues. Jewish refugees assimilated into other populations of Jews on the European continent and, presumably, started over. In the end, and despite the success of Licoricia and a few of her contemporaries, authors Reva Berman Brown and Sean McCartney note, “Jews were in England, but never of it.” 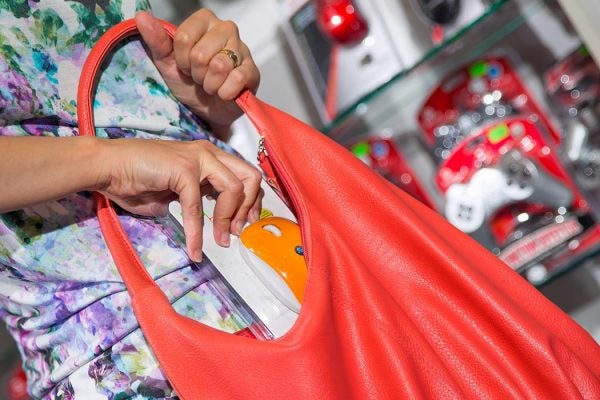