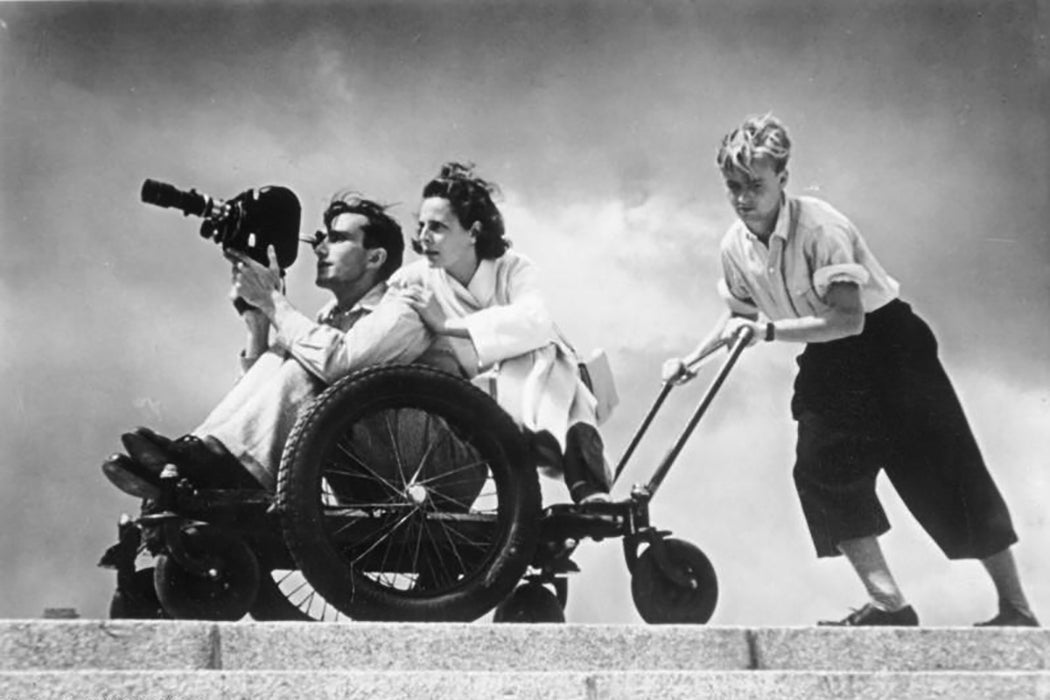 The name “Leni Riefenstahl” brings to mind the chilling iconography of her propaganda film, Triumph of the Will. Riefenstahl certainly earned her controversial reputation—acting as the Nazi regime’s most artistic propagandist will do that. But art historian Michael Mackenzie remembers Riefenstahl for a different accomplishment: Olympia, her two-part documentary of the 1936 Olympics.

Not that that year’s summer games were free from the taint of Nazism. Quite the contrary: The Berlin Olympics were a chance for the Third Reich to glorify and showcase its fascist ideals and physical prowess. Among the highlights (and low points) of the so-called “Nazi Olympics” are Hitler’s attempted banning of Jewish athletes, runner Jesse Owens’ triumph in the face of racism and official snubs, and the introduction of the torch relay, which became a beloved Olympic tradition. And Leni Riefenstahl was there for all of it with her camera.

Mackenzie calls Riefenstahl “the unofficial film auteur of the Nazi Party,” while noting that Olympia, her two-part documentary of the games, is “less clearly propagandistic.” The similarities between the documentary and Riefenstahl’s propaganda are clear. But is the film and its aesthetic fascist?

It’s complicated, says Mackenzie. Though the film’s portrayal of “superhuman beauty” and classicism could point to fascist intentions, Mackenzie also notes that such themes were present in German culture long before Hitler. He chalks up those themes instead to Riefenstahl’s background in Germany’s Expressive Dance movement, which highlighted athletic bodies and classical forms.

Expressive Dance would have been familiar to anyone who grew up in Germany after the turn of the century. Riefenstahl, who had a background in dance, was fluent in the language of rhythm. Perhaps, suggests Mackenzie, Riefenstahl’s attempt to romanticize a backward-looking athleticism based on physical superiority was her attempt “to transform the Olympic Games into art, and her conception of art, which was formed in her youth in the 1920s in the small, elitist [Expressive Dance] milieu.”

Regardless of Riefenstahl’s aesthetics, Olympia cannot be separated from its Nazi connections—or the ways it was used to glorify German athleticism and justify the subjugation of others. “I do not agree with Riefenstahl or her apologists that Olympia is only a work of art, that it is somehow apolitical,” writes Mackenzie. But he finds a more complicated debate beneath the surface, raising questions about whether art in service of fascism can still retain its artistic integrity. Eighty years later, one thing is clear: Olympia and the Olympics it documented still have the ability to intrigue, provoke, and chill.

Read about another iconic, problematic film: “Birth of a Nation.”

Colton Whitehead's new novel The Underground Railroad, and how he researches his books.