Lacebark as a Symbol of Resilience

For the enslaved people of Jamaica, the lacebark tree was a valuable natural resource and a means of asserting one’s dignity. 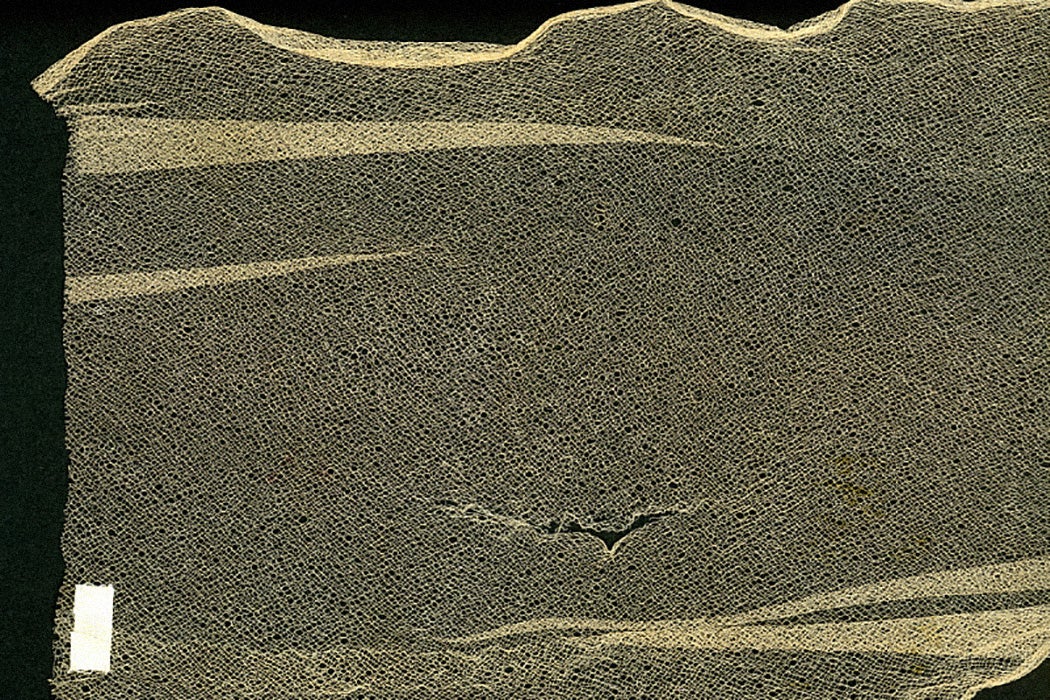 There’s a kind of lace that grows on trees. Or, more accurately, it grows in trees. This unique textile, known as lacebark, is the phloem—the inner vascular tissue—of the Jamaican Lagetta lagetto tree. You might be picturing something rough and splintery, but in actuality, lacebark is remarkably delicate, gauzy and soft.

I’ve seen samples in botanical collections: sections of trunk in which the white lace seems to be bursting out of the bark, like a chunk of wood transforming before your eyes into a wedding dress. It seems like something out of a fairy tale. Indeed, lacebark was sometimes called “vegetable lace,” evoking the mythical half-sheep, half-shrub “vegetable lamb.”

The material is soaked until it’s soft and then carefully stretched until it’s smooth, wisp-thin, and many times wider than its original size.

Most bark cloths are prepared by an arduous process of soaking and beating bark strips until they’re smooth and supple. Lacebark is unusually simple to make. It’s produced by peeling away the bark and extracting the inner netting of white veins. The material is soaked until it’s soft and then carefully stretched until it’s smooth, wisp-thin, and many times wider than its original size.

You can’t find lacebark clothes on the shelves of your local clothing retailer. It’s never been industrially cultivated. In its long history of use, it’s usually—perhaps always—harvested from the wild. The lacebark tree grows in cracks between rocks. It flourished in the rocky limestone forests of Jamaica’s Cockpit Country, the same rugged landscape that provided shelter for the Leeward Maroons, one of the several communities of formerly enslaved Africans who escaped the brutal plantation system, melded with the indigenous Taíno people, and carved out an independent life farming, hunting, and occasionally raiding nearby plantations. Lacebark became a part of their way of life—harvested from the forest by the men and processed into cloth by the women.

For those who were still trapped within the brutal plantation system, lacebark was perhaps even more important. Historian Steeve O. Buckridge has made an extensive study of the history of lacebark in Afro-Jamaican culture. In “The Role of Plant Substances in Jamaican Slave Dress,” he outlines the pragmatic reasons for its use. Although Jamaican law required that enslaved people be provided clothing, they were usually only granted a few yards of cloth a year. They had to turn this meager allotment of fabric into clothes themselves—clothes that deteriorated quickly under the strains of hard labor and tropical weather. Obtaining sufficient clothing was particularly challenging for enslaved women, who were granted fewer yards than men, even though women’s styles required more cloth. They were forced to resort to other means of dressing themselves. Some women sold produce in order to save up money for imported fabric or took on side work as seamstresses. Others turned to lacebark.

But, as Buckridge argues, there was more to it than simple practicality. The delicacy and beauty of lacebark clothing served as a message in itself. To Europeans, lace was a potent symbol of status and refinement. In this context, wearing lacebark was a way of asserting dignity against the demands of a brutal society. In “Jamaican Lace-Bark and the Construction of the Feminine,” he writes,

Women’s lives were intertwined with the making of lace-bark and reflected the material environment of colonial Jamaica. The lace-bark industry fostered a creative space that enabled Jamaican colonized women to be expressive in their dress and at the same time escape, at least temporarily, the harsh and oppressive conditions of plantation life… Peasant and working class women appropriated the fashions of the upper classes, copied and modified them to their liking and used lace-bark to “make fashion” to show that they too can be beautiful as the elite, but on their terms.

In this way, African and European styles melded together into a distinctive Creole fashion. And as historian Danielle C. Skeehan has argued, the influence ran both ways; styles like headwraps and shorter sleeves that originated in Creole culture began to appear on the ladies of European high society. Fashion is fickle; it never stays put. Colonized, working class women may have appropriated the fashions of the upper classes, but the upper classes appropriated right back.

Editor’s note: This story was edited to correct a misspelling.

THE LAGETTO, OR LACE-BARK TREE
Scientific American, Vol. 39, No. 12 (September 21, 1878), p. 184
Scientific American, a division of Nature America, Inc.
The Performance of Freedom: Maroons and the Colonial Order in Eighteenth-Century Jamaica and the Atlantic Sound
By: Kathleen Wilson
The William and Mary Quarterly, Third Series, Vol. 66, No. 1 (January 2009), pp. 45–86
Omohundro Institute of Early American History and Culture
The Role of Plant Substances in Jamaican Slave Dress
By: Steeve O. Buckridge
Caribbean Quarterly, Vol. 49, No. 3 (September 2003), pp. 61–73
Taylor & Francis, Ltd.
JAMAICAN LACE-BARK AND THE CONSTRUCTION OF THE FEMININE
By: Steeve O. Buckridge
Journal of Museum Ethnography, No. 31, Cloth and Costume in Ethnographic Museums: New Directions in Research, Care and Interpretation Papers from Annual Conference of the Museum Ethnographers Group Held at the University of Glasgow 6–7 April 2017 (March 2018), pp. 28–51
Museum Ethnographers Group
Caribbean Women, Creole Fashioning, and the Fabric of Black Atlantic Writing
By: Danielle C. Skeehan
The Eighteenth Century, Vol. 56, No. 1 (Spring 2015), pp. 105–123
University of Pennsylvania Press