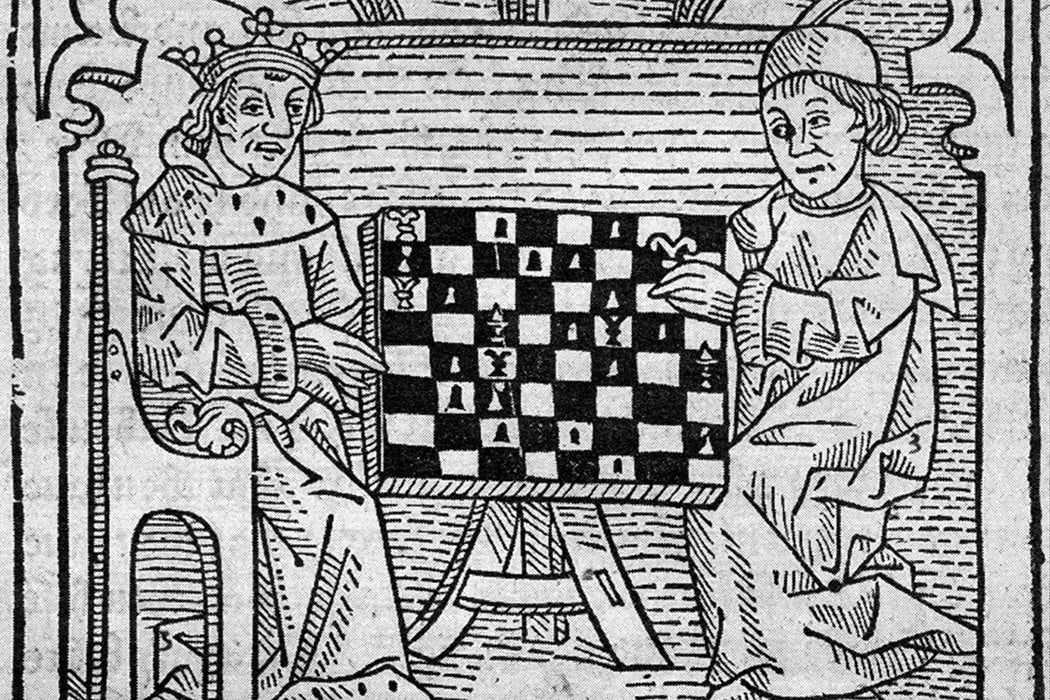 Chess was an allegory of courtship in the thirteenth and fourteenth centuries, but the game wasn’t just symbolic of heterosexual desire. According to medieval literature scholar Jenny Adams, “The medieval game of chess provided an active (and often interactive) register of the cultural and intellectual climate to the Middle Ages, affording us a window into the anxieties that surround an individual’s social and political identity, and in particular gender identity.”

Adams writes that the game increased in popularity during the era of the troubadours and courtly love, “a medium of male-female interaction or space that fosters romantic, heterosexual desire.”

“The game embeds itself in larger issues of class, power, and, in particular, patriarchy.”

But what about when men played together? That was more typically the case in the male-dominated European society of the Middle Ages. “If we continue to interpret the game as recording moments of heterosexual desire, we risk overlooking the ways that it participates in larger structures of political power,” writes Adams.

Reading chess as symbol of heterosexual courtship is too limiting, continues Adams, for “the game embeds itself in larger issues of class, power, and, in particular, patriarchy.” The same set of chess pieces “also encourages and arbitrates male homosocial desire.”

The idea of homosocial desire, popularized by scholar Eve Kosofsky Sedgwick, is that same-sex relationships—friendship, brotherhood, mentorship—are bonding mechanisms that help maintain male dominance. Sedgwick wrote “in any male-dominated society, there is a special relationship between male homosocial (including homosexual) desire and the structures for maintaining and transmitting patriarchal power.”

In the literary works Adams examines, Marie de France’s Milun and Eliduc, and the Dutch variation on the legend of Sir Gawain, the Roman van Walewein, chess is the locus of these special relationships. It’s fundamental to the development of the hero’s movement from boyhood to manhood. A knight begins by teaching the king’s daughter chess, but she is soon watching as the two men play. Chess cements male bonds: “The male-male chess scene suggests that Eliduc must recognize that his relationship with his lord takes precedence over his sexual passion.”

The board itself is the site of negotiation between men over women’s bodies—”checkmate” translates as winning a wife. In the Roman van Walewein, the game shows “homosociality as the normative, desirable state, with heterosexuality occupying a category that is simultaneously forbidden and compulsory.”

The word “chess” is “etymologically related in several languages to the ‘exchequer,’ the administrative branch of accounting.” The game represented an ideal state: stability, order, monarchy. Even the pieces are a medieval world in miniature—pawn, rook, knight, bishop, queen, king. Though chess has its origins in Persia and India, what’s known today as international style chess developed in medieval Europe. It mirrored a hierarchical ordering of society and reinforced that in the playing. “When two players play, what occurs is not only an intellectual game but also a playing out of certain key patriarchal gestures and hegemonies.”

While women played in the medieval period, and the role of the queen expanded in the fifteenth century, chess entered the modern period as a decidedly male pursuit. That ideological stance has increasingly been challenged.