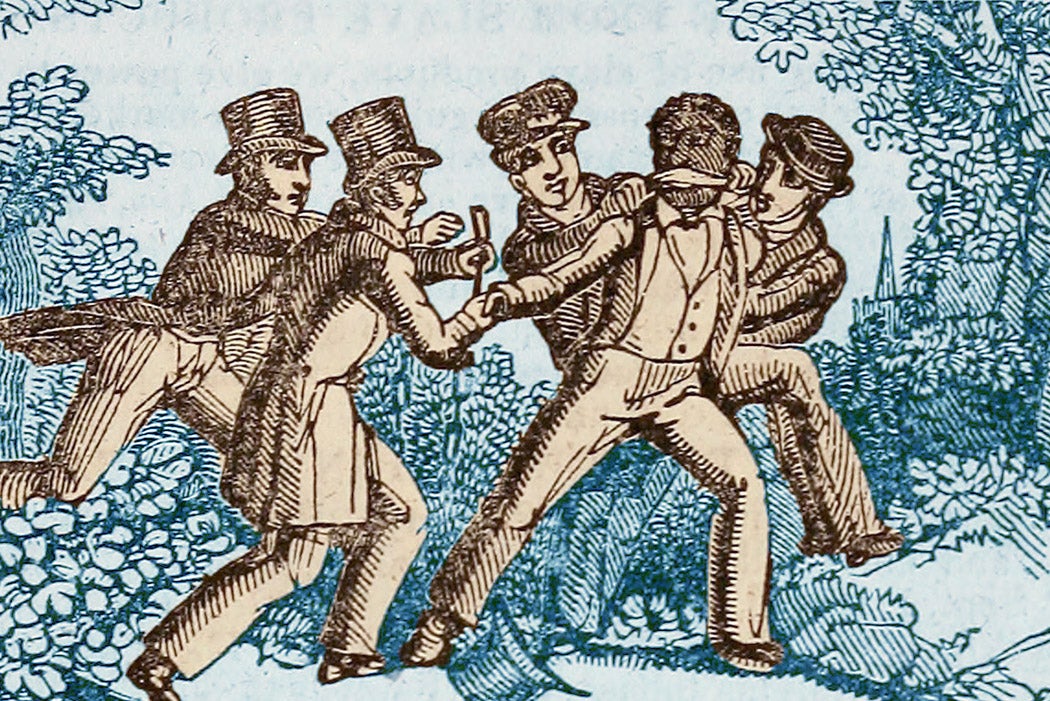 Between the banning of slave importation in 1808 and the Fugitive Slave Act of 1850, thousands of free-born Black people in the North were kidnapped into slavery. The illicit gangs that ran this human trafficking often had “colored” collaborators. Such “treacherous creatures,” in the words of early Black abolitionist David Walker, called for desperate measures.

Scholar Richard Bell writes that the ever-present threat of blackbirders—as the kidnappers were known, regardless of their color or sex—helped forged a “binding relationship between African American identity and the cause of antislavery.”

Combined with a cotton boom, a new market for enslaved labor literally invaded free Black communities of the North.

“Free [B]lack residents of northern towns and cities reacted with early and unrestrained energy to stop kidnappers of color in their tracks,” continues Bell. “Such direct, physically and violent confrontations with agents of the Slave Power” were uncommon at the time and “mark an early point of origin for later ‘practical abolition’ efforts.” Yet the attention paid to the well-known rescues and rescue attempts by abolitionists after the Fugitive Slave Act has tended to obscure the “broadly comparable number” made during the four decades before 1850.

The 1808 ban on slave importation forced the price of slaves to leap upward. Combined with a cotton boom, a new market for enslaved labor literally invaded free Black communities of the North. “White entrepreneurs like Joseph Johnson and his mixed-race associate John Smith” grabbed young people, especially men and boys under twenty, off the streets of Baltimore, Philadelphia, New York, and elsewhere.

The Johnson outfit was “arguably the most successful kidnapping gang in American history,” posits Bell. Operating in the 1810s and 1820s, the gang worked by having Smith or another Black man or woman approach likely targets and offer them work unloading fruit from a sloop. Once on the sloop, the youngsters were taken captive and transported for sale in backcountry Alabama and Mississippi or in New Orleans.

“In June, 1825, [Smith] baited and decoyed no less than a dozen children by these means in the space of just a few days. Returning to [Philadelphia] that August, Smith was under instructions to stock the [sloop] Little John with as many black children as he could find.”

Bell argues that this trafficking can be thought of as an underground railroad in reverse. The end goals were different, obviously, but both systems depended on opportunity, subterfuge, fake identities, hideouts, trusted allies in loose networks, and “African-Americans in the front-line positions.”

Bell writes that the best way to understand the collaborators “is to think of them as con artists.” The antebellum age was the “golden age of the con,” and the oldest trick in the book “was to project the illusion of shared identity and common cause… [B]lack collaborators were a common presence in all manner of scenarios involving abduction and rendition in American slavery.”

These kidnappings “haunted African American neighborhoods, a constant and existential reminder of the limits of [B]lack freedom in post-revolutionary America.” With the law rarely concerned, and groups like the Pennsylvania Abolition Society and the New York Manumission Society not particularly militant, the “best and most immediate way to try to thwart kidnappers, both white and [B]lack, was to take matters into their own hands.”

Communities fought back against “traitorous brethren” and “counterfeit kin” by doing what communities do best. Children were cautioned and urged to stay in groups; strangers were challenged; neighborhood watch committees were set up. As documented by William Wells Brown, John Russwurm, William Parker, and others on the front line of self-emancipation and abolition, self-defense was added to the mix.

Vigilantism against blackbirders, writes Bell, was “punitive, preventative, and performative.” The last of these was important because these acts were public demonstrations of how far people would go to protect their own. They “were important rituals of identity proclamation, visible signs that members of these preyed-upon communities would not abide such betrayals.”

The threat of the “colored Judas” made racial solidarity “a core principle of black life in freedom,” defendable by any means necessary.

Counterfeit Kin: Kidnappers of Color, the Reverse Underground Railroad, and the Origins of Practical Abolition
By: Richard Bell
Journal of the Early Republic, Vol. 38, No. 2 (Summer 2018), pp. 199–230
University of Pennsylvania Press on behalf of the Society for Historians of the Early American Republic