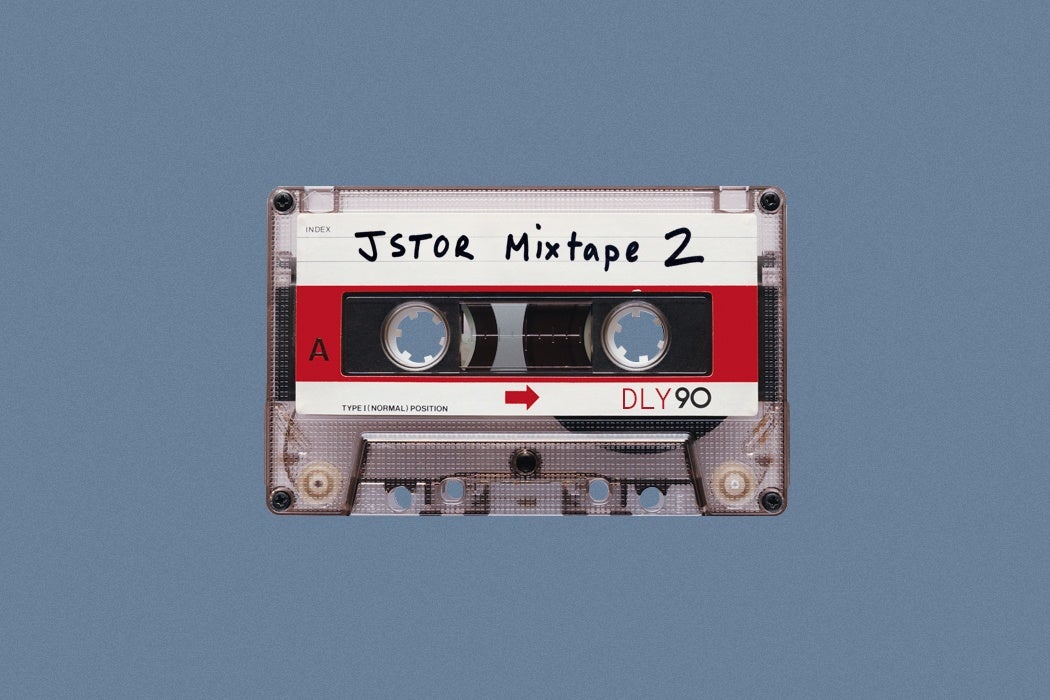 From the vintage shades of Leonard Cohen (R.I.P.) to the feminist punk of the riot grrrl movement, our latest JSTOR playlist showcases the complex, energetic artistry of several radical scenes. These greats were no slouches when it came to scholarship and poetry, either.

Leonard Cohen died in 2016, but he seemed ancient for a long time before that. His poetry and lyrics were grounded in love, appetite, lust, and pain—the timeless realm of myth or allegory. This poem somehow manages to lasso Cole Porter and the Old Testament’s Song of Solomon and yank them together. The two together are a stuttering, faltering paean to desire.

Neko Case—Hold On, Hold On

Neko Case’s voice is powerful, whether she’s fronting her own band or singing in the Canadian super-group The New Pornographers. In this Poetry piece, Case confesses she was first flattered—and then flattened—by the request to contribute. Untutored in the finer points of poetry, she falls back on the emotional wallop of poems that hit you “like a bat in the face”—not a bad metaphor for someone who describes her own lyrics as “fragments of gibberish.”

Tim Hecker is a modern composer and experimental musician whose compositions often feature digital manipulation. “Sketch 4” is quintessential Hecker. A simple but subtly disquieting series of piano chords unspools and is gradually underscored by a scratchy, static-y sound that ratchets up the tension. Hecker’s essay focuses on the famed pianist Glenn Gould’s turn from performing to working solely in the studio. At the height of his renown, at the age of 34, Gould stopped playing concerts and sought a utopian ideal of creativity in the recording studio. Hecker argues that this rejection of a live audience was ultimately an inward, isolating turn.

Best known as a composer of ambient music, Brian Eno was hugely influential in the growth of rock music into an art form during the 70s and 80s. Eno was an early member of Roxy Music and a producer on monumental albums by David Bowie (the famed Berlin trilogy: “Low,” “Heroes,” and “Lodger”) and Talking Heads (“More Songs about Buildings and Food,” “Fear of Music,” and “Remain in Light”). Eno’s contribution to Litoral’s Poetry of Rock issue is a wistful poem in Spanish about change whose title translates to “I will run (to tie your shoe).”

While still in high school in Louisville, Kentucky, David Grubbs started the furious (and underappreciated) hardcore band Squirrel Bait. The band released only two scorched-earth albums, but its members went on to be part of seminal indie bands like Slint and The Breeders. Grubbs worked in Gastr del Sol and Bitch Magnet. In Afterall, Grubbs discusses the freeform, shambolic musical collective known as Workshop, fronted by German musician and artist Kai Althoff.

Kathleen Hanna is the feminist giant behind the political and musical movement known as riot grrrl. She famously decked Courtney Love and takes a backseat to no one in bad-assery. Her bands Bikini Kill and Le Tigre are essential parts of post-punk and feminism, emerging in Washington, D.C. and the Pacific Northwest in the 90s and early 00s. The Julie Ruin—her most recent band—continues the tradition of joyful, strident, fiercely political music Hanna has always made. In this interview from 1993, Hanna plays down her role as a central figure of riot grrrl and focuses on the collective nature of the movement.

Billy Bragg—Greetings to the New Brunette

Billy Bragg is a British folk musician whose 30-year recording career is stuffed with songs about the human toil and toll of political engagement. The title of his third album nicely captures the mix of pop and politics that characterizes his music: “Talking with the Taxman about Poetry.” The couple in “Greetings to the New Brunette” embodies the same admixture, as they “engage in the ideological cuddle.” Here, Bragg offers a foreword to David Rosenberg’s walking tour of the radical sites of London.

David Byrne—Don’t Want to Be Part of Your World

The single-minded musical genius behind Talking Heads, David Byrne pioneered the incorporation of polyrhythms and African music into the new wave rock of the downtown NYC scene that centered on legendary club CBGBs. His subsequent work has thrown its arms wide, embracing music from around the globe, including the Brazilian music that inspired his solo record “Rei Momo.” The label he formed in the 1980s, Luaka Bop, has been releasing world music for three decades. Byrne’s article focuses on the strange affinity residents of Northern Europe have for machine-made music, in particular the microgenre known as blip-hop. There is an archness to the faux-anthropology of the discussion that will be familiar to any Talking Heads fan—earnest but not in earnest.

M. Ritchey was part of the Portland electroclash duo The Badger King, who recorded an album and an EP, and scored an opera called “The Showering Dragons.” They also set Anne Sexton’s poem “Sermon of the Twelve Acknowledgments” to a blistering, moving melody. M. Ritchey’s voice was once described by Seattle’s indie weekly The Stranger as “strong enough to burst a hot water bottle.” She tamed her vocals to make an album of melodic folk as one half of Lloyd & Michael. In this article, she argues that the French literary movement that followed the French Revolution—usually called “the French fantastic,” characterized by a focus on secularism, violence, and death—can help illuminate the fourth movement of Berlioz’s Symphonie fantastique. Severed heads figure prominently.

Vijay Iyer majored in math and physics at Yale. He was pursuing his Ph.D. in physics at UC-Berkeley when his lifelong interest in music took over. He had studied violin since childhood, but it was the piano, an instrument on which he was largely self-taught, that he found fame. Now known as a composer, bandleader, and one of the most innovative jazz pianists on the scene, Iyer was named a MacArthur Fellow in 2013, the recipient of a “genius” grant. His article, an outgrowth of his dissertation at Berkeley, explores the way our perceptions of music are shaped by both the cognitive and the physical. Special focus is given to microrhythmic techniques in African-American music, using audio examples created by the author or sampled from well-known jazz recordings.

Share Tweet Email Print
Have a correction or comment about this article?
Please contact us.
music19th-Century MusicAfterall: A Journal of Art, Context and EnquiryLeonardo Music JournalLitoralMusic Perception: An Interdisciplinary JournalOff Our BacksPoetryRebel Footprints: A Guide to Uncovering London's Radical History

How Elizabeth Strout went from writing in car during her baby's naptime to becoming the bestselling, Pulitzer Prize-winning author she is today.