How Hulk Hogan v. Gawker May Change the Face of Journalism

The recent Gawker vs. Hogan spat is the latest in the long history of journalism, free speech, gossip, and the law. 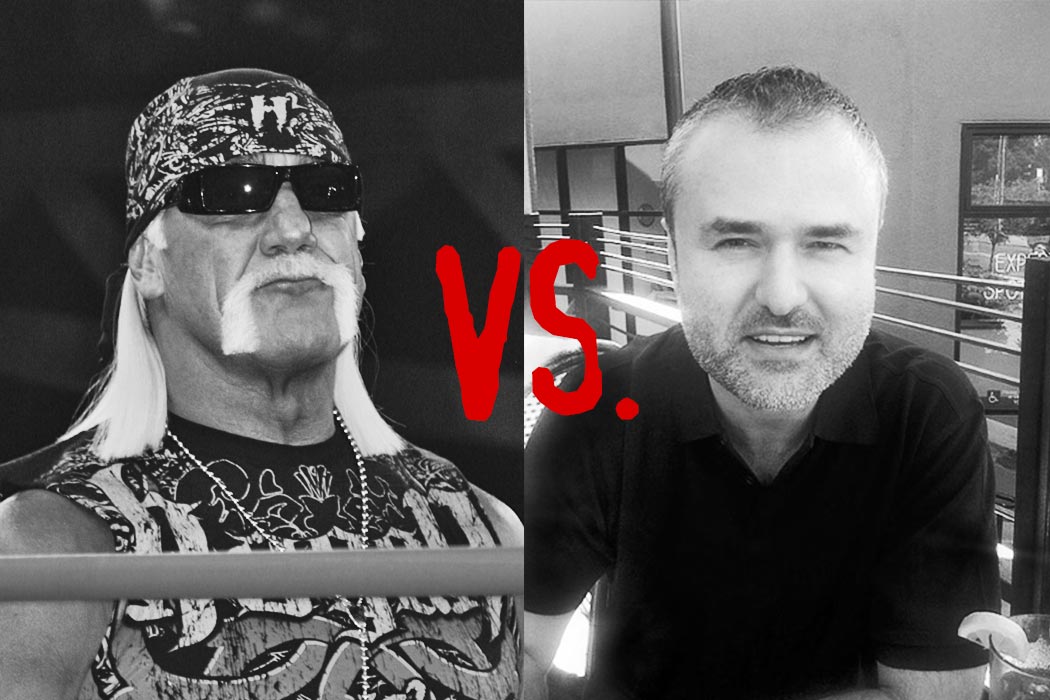 In March, 2016, a jury awarded wrestler Hulk Hogan $140 million in damages from a suit he brought against Gawker Media. In 2012, Gawker released a sex tape of Hogan and his friend and radio DJ Bubba Clem’s wife, which was taped by Bubba Clem, allegedly without Hogan’s knowledge. Hogan claimed that the tape represented an invasion of his privacy by the press. Gawker is appealing the decision.

Fabio Bertoni, the New Yorker’s general counsel, makes the argument that the decision against Gawker chips away at freedom of the press, largely by threatening editorial discretion about what is newsworthy and producing a chilling effect. Sex tapes are considered newsworthy if they expose the hypocrisy of a public official or are in some other way relevant to public life. The Hogan tape is not clearly newsworthy—but it’s not clearly not newsworthy, either. It had been floating among news organizations for some time before Gawker decided to publish it, and Gawker editors have since backpedaled a bit from their decision.

The press has always walked the newsworthiness line when it comes to gossip and celebrities.

But it’s easy to see how this decision could influence journalists in the future; censorship is a slippery slope, and as Bertoni notes, Gawker’s lawyer is right to point out that “the First Amendment must take a broad view of ‘newsworthiness’ to have any effect.” And the threat of retribution presented by Hogan’s suit is huge: If media organizations make one wrong move, they could be tanked.

Of course, the press has always walked the newsworthiness line when it comes to gossip and celebrities. Hogan’s contention that the press invaded his privacy is certainly up for debate. For one thing, he was awarded $55 million to compensate him for the money he would have made had he released the tape (at $5 a download), suggesting that privacy might not be Hogan’s main concern.

Hogan owes his claim to privacy to former U.S. Supreme Court Justice Louis Brandeis. In 1890, Brandeis and attorney Samuel D. Warren authored a piece in the Harvard Law Review called “The Right to Privacy,” which is the foundation for our contemporary concept of privacy (along with Brandeis’s dissent in Olmstead v. United States). The piece specifically defines privacy against the invasive powers of the press, the photographer, and gossip:

The press is overstepping in every direction the obvious bounds of propriety and of decency. Gossip is no longer the resource of the idle and of the vicious, but has become a trade, which is pursued with industry as well as effrontery. To satisfy a prurient taste the details of sexual relations are spread broadcast [sic] in the columns of the daily papers. To occupy the indolent, column upon column is filled with idle gossip, which can only be procured by intrusion upon the domestic circle…..Each crop of unseemly gossip, thus harvested, becomes the seed of more, and, in direct proportion to its circulation, results in the lowering of social standards and of morality. Even gossip apparently harmless, when widely and persistently circulated, is potent for evil. It both belittles and perverts. It belittles by inverting the relative importance of things, thus dwarfing the thoughts and aspirations of a people.

Their piece seems particularly prescient about privacy issues raised by the internet, as it defends the privacy of the individual’s personal life against a growing apparatus that threatens it. It is here, too, that Brandeis establishes his sense of “newsworthiness”: “The right to privacy does not prohibit any publication of matter which is of public or general interest.”

If anything, the fact that Warren and Brandeis’s piece actually defines individual privacy against the press speaks to the power of the press at the time. Their paper came in the midst of debates about sensationalism in journalism and efforts at diffusing the editorial power of newspapers. To cast things backward to the late 1800s, William Randolph Hearst and Joseph Pulitzer used to compete for readers by mixing hard reporting with true crime stories. This sensationalism of the press was termed “yellow journalism”—hyping up stories that are not clearly newsworthy.

And even if the Hogan tape was deemed relevant to public life, there is also the question of whether it was necessary to publish the actual sex tape, or if it would have been sufficient just to describe it in an article. The Gilded Age also wrestled with how information being presented could over-hype the story or point readers’ attention in the wrong direction. Back then, there were two literary devices that people were talking about in the context of the dignity of journalism: first, the use of the interview in newspapers and second, the use of signatures by journalists.

Glenn Wallach provides a wonderful summary of the Beecher scandal of the 1870s, which contains in a nutshell the changing relationship between the public sphere and private lives during the Gilded Age. The story is weirdly reminiscent of Hogan’s: The scandal concerns the relationship that clergyman Henry Ward Beecher had with the wife of one of his close friends. The adultery gained national attention because it exposed a public man’s hypocrisy—it was clearly newsworthy in some sense. Yet, many were unnerved by the disproportionate amount of attention Beecher’s case got in comparison to matters of government and state importance.

In the late 1800s, William Randolph Hearst and Joseph Pulitzer used to compete for readers by mixing hard reporting with true crime stories.

The Nation’s editor, E.L. Godkin, was outraged. He felt newspapers played to the public’s lowest instincts. The scandal particularly incurred his wrath because he also believed that Beecher represented the “mental and moral chaos” that plagued the broader culture. This had particular relevance for journalism’s role in maintaining the public sphere. “There is not a house in the country in which the defendant is not, week after week, put on his trial,” Godkin wrote. “[N]othing is frivolous or irrelevant or untrustworthy. It puts rumors, suggestions, theories, suspicions, reminiscences, hints, the idle gossip of the sidewalk, and the solemn assertions of the eye-witness on about the same level.

The New York Times, Wallach writes, was just as torn between preserving the dignity of journalism and meeting demand from the public. In 1869, the Times condemned the interview as representative of “the practice of giving prominence and notoriety to obscure people in whose movements the public in general can have no possible interest.”  “Criticism,” says Wallach, “concentrated on interviewing’s menace to political life. An interview was ‘generally the joint production of a hack politician and another humbug of a newspaper reporter,’ seeking to provide spicy personality details rather than important aspects of policy.” Eventually, newspapers skirted responsibility, instead blaming a changing public for the indecency.

Elsewhere, Victor Yarros, sometime law partner of ACLU leader Clarence Darrow, wrote a series in the American Journal of Sociology arguing against sensationalism (beginning with the 1909 piece “Is an Honest and Sane Newspaper Press Possible?”). In “The Press and Public Opinion,” Yarros opines on the press’s tendency to “habituate readers to scandal, filth, and vulgarity,” which makes “clean journalism [seem] insipid and flat to them.” Yarros offers signatures as one possible solution; attaching journalists’ names to the pieces that they write. “The signature system, if rigidly enforced, would have one important effect: It would destroy much of the prestige of the press and of the awful authority and mystery of the ‘we.’ ” The editorial “we” should be read as a version of the royal “we,” implying not only authority but also a plurality of opinion.

Certainly, Yarros would agree that a major driving force behind the increasing publication of private lives is money: “It is safe to say that nearly all the evils connected with the press flow not so much from their partisan nature as from their commercial aspect.” In “A Neglected Opportunity and Duty in Journalism” (1916), Yarros puts forth a model for how newspapers could be funded in a truly nonpartisan way. “We can no more expect genuine journalistic reform from these types of publishers and editors than we can expect the proverbial silken purses from sow’s ears,” he writes. But what about the model used “for education, for research, for progressive philanthropy,” all of which are funded through privately endowed foundations? He sees the pitfalls of having a “single multimillionaire” endow a newspaper and instead advocates setting up a national foundation with many branches. Best of all, he suggests, his plan would get rid of the sovereignty of that pesky editorial “we.” “If we want opinions, a truly independent and honest newspaper will know how to satisfy this want. It will interview known experts and authorities, or invite them to contribute careful articles….Anonymity covers much ignorance and ludicrous pretension.”

Dallas Liddle has similarly researched this question of the editorial “we” in England, where questions of anonymity in newspapers came up during the Victorian era. Liddle breaks down the arguments for and against. Anonymity can lend writers authority, for instance, and serve as a safeguard against political prosecution. Anonymity was also potentially a way that women could be involved in the press. But anonymity, some also admit, has to do with journalism’s job as “teachers of the nation”: “to inform, to advise, and to direct.”

The advent of the internet poses a similar challenge to us now as that faced in the late 19th century: the competition between public demand and journalistic dignity.

While the material dating from the late 1800s is tinged with a moralism about privacy that seems obsolete—in particular about sexual privacy and the privacy of politicians—the advent of the internet poses a similar challenge to us now as that faced in the late 19th century: the competition between public demand and journalistic dignity. The arguments about incendiary headlines designed to sell papers and the publication of gossip in response to reader demand will be all too familiar, especially for those of us tasked with coming up with SEO-maximized, click-worthy headlines. It is bittersweet that the thing in which we placed our hopes for greater democracy and the spread of information is threatening freedom of the press, both in quality and existence.

Certainly the likes of the New Republic and Al Jazeera America underwent a similar challenge as Gawker, facing existential questions about keeping journalism a sustainable business in the era of sponsored content. While I enjoy the New York Times opinion page too much to agree with Yarros about getting rid of newspaper personality, I do admire his utopian approach to keeping news outside the market. However embroiled Joseph Pulitzer might have been in a race to become the more successful newspaper man, I found his comments about the integrity of journalism, apart from money, inspiring:

A journalist is the lookout on the bridge of the ship of state. He notes the passing sail, the little things of interest that dot the horizon in fine weather. He reports the drifting castaway whom the ship can save. He peers through fog and storm to give warning of dangers ahead. He is not thinking of his wages, or of the profits of his owners. He is there to watch over the safety and the welfare of the people who trust him. 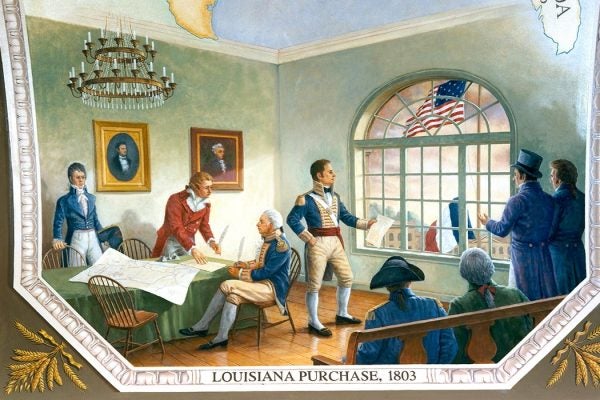 The Politics of the Louisiana Purchase

Much of what the young American Republic did was without precedent, and the Louisiana Purchase of 1803 was ...