Racking up likes and followers today resembles the nonstop friending of 19th-century England. But Austen’s characters figured out how to disengage. 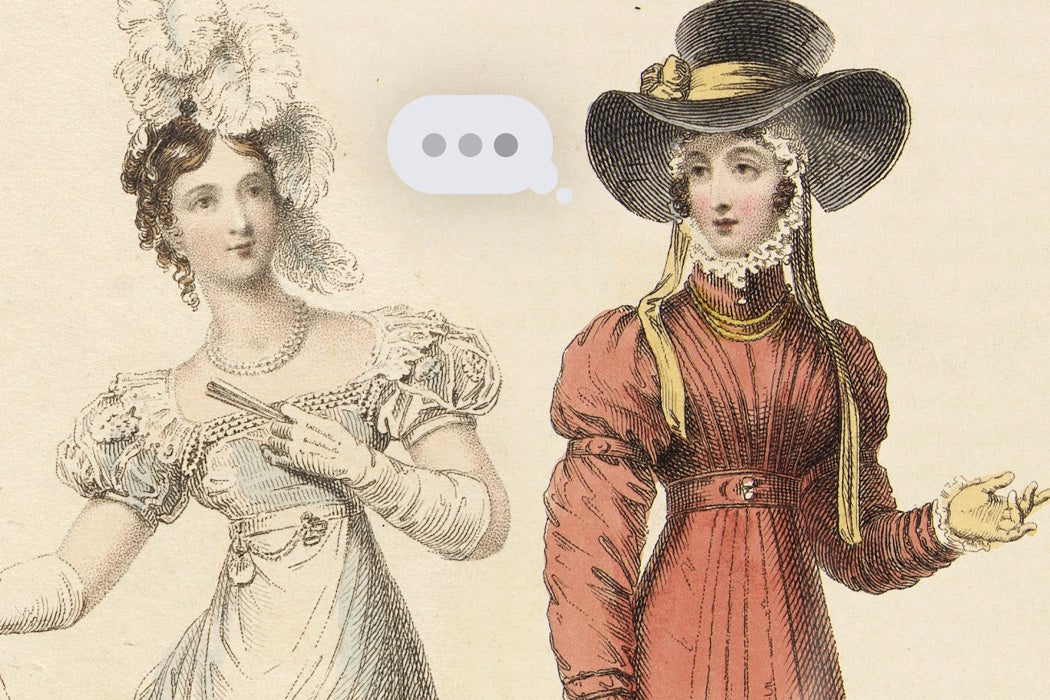 It’s exhausting to live in a world of constantly swirling social interaction, in which you never know who you’re going to hear from, or how you’ll live up to the pressure to respond. It’s uncomfortable to know that you can be assessed and measured by very public metrics, which amount to a transparent calculation of your worth. It’s stressful to hew to the standards of public discretion, knowing that any violation of propriety will be held against you forever.

The parallels between our world and Austen’s jumped out at me when I recently returned to her works after many years. When I first read Austen’s Pride and Prejudice at the age of fifteen, the World Wide Web had yet to be invented. When I picked up her next novels in my mid-twenties, it was still many years before the advent of blogging, Facebook, Twitter, and YouTube.

But I recently yielded to a sudden and acute Austen craving, which plunged me into six weeks of gorging on her work, this time in audiobook form. Austen’s words poured over me as I puttered through my daily tasks: Emma gossiping as I glanced at my morning email, Eliza Bennet whispering in my ear as I plugged my devices in to charge each night.

I soon found myself wondering how the inhabitants of Austen’s world put up with this constant pressure to socialize.

I soon got past the incongruity of finding Jane Austen on my phone, in my audiobook app, and in the ebook I downloaded so that I’d have access to explanatory annotations on the text. (Yes, I’m afraid I really have fallen down the Austen rabbit hole this time.) Indeed, as I plunged into Austen’s England from the very device that normally connects me to Facebook and Twitter, her world and ours looked more and more alike.

The similarities begin with the sheer volume of social interaction required of both English gentry and social media users. In addition to their month-long visits (does anyone want an Airbnb guest who stays that long?), Austen’s characters indulge in a daily exchange of “calls.” In “Jane Austen’s Speech Acts and Language-Based Societies,” Candace Nolan-Grant describes this practice as

the convention of calling on one’s acquaintances, which requires either conversing with the members of the household for at least fifteen minutes if they are home, or leaving a card if they are not. Calling on acquaintances typically does the following: announces that the caller deems his or her host worthy of notice and feels some obligation to call; obliges the host(s) to receive the caller and to return the visit; and opens (or closes, depending on the tenor of the visit) doors for further social intercourse.

At first, I envied Austen’s characters this daily face-to-face social interaction: I often go weeks without seeing even my closest friends in person, staying in touch via Facebook or SMS instead. But I soon found myself wondering how the inhabitants of Austen’s world put up with this constant pressure to socialize—until I realized that we face just as much demand for interaction, albeit in digital form. Austen’s characters may face a nonstop parade of callers, but at least they don’t have to deal with Facebook friend invitations and an endless series of requests to connect on LinkedIn.

Of course, if our inboxes are overflowing, it’s often because we’ve followed the many admonitions to build up our professional networks and attract social media fans. This is another way in which social media replicates the dynamics of Austen’s world: both place great emphasis on the value of introductions, and both quantify the value of each new friend or connection.

Austen’s characters assess one another in pounds: they constantly refer to the wealth of their various acquaintances, naming their annual incomes or the size of their estates. It is not enough for Austen to point out, in the famous opening line of Pride and Prejudice, that “It is a truth universally acknowledged, that a single man in possession of a good fortune, must be in want of a wife”; before long we (along with all the characters in the novel) know that this “good fortune” is an annual income of £4,000 to £5,000. As Robert D. Hume points out in “Money in Jane Austen,” this places him not just in the top one percent of English families, but in the top ten percent of the one percent.

If Austen’s characters are striking for the candor with which they discuss one another’s income, their discretion on other subjects looks truly remarkable to my modern eyes.

But how can I be squeamish about Austen’s characters referring to their new neighbors with reference to these kinds of figures, when my friends and acquaintances so frequently do the same? No, they don’t refer to new friends by their tax bracket—but if that friend has a hundred thousand Twitter followers, or five hundred likes on their latest Insta post, I’m sure to hear about it. And considering how many people seek to monetize their social media followings, we can’t delude ourselves that we are superior for naming our friends’ metrics rather than their money.

If Austen’s characters are striking for the candor with which they discuss one another’s income, their discretion on other subjects looks truly remarkable to my modern eyes. I have witnessed every imaginable form of online overdisclosure, from dishing on business deals to sharing sexual peccadilloes—and I’m responsible for a fair share of overdisclosure, too. In contrast, heroines like Eliza Bennet pay careful attention to bounds of “propriety.” In “Pride and Prejudice: The Limits of Society,” James Sherry points out that Austen’s notion of propriety

suggests a kind of behaviour which is particularly careful not to violate the privacy, the integrity, and the right to respectability of every individual. As a concept governing social relations, then, “propriety” is intimately concerned with the discretion and reserve necessary to prevent individuals or actions from becoming “common” through excessive familiarity.

Precisely because the inhabitants of Austen’s world are so restrained in what they can say to one another, they are constantly retreating to the solitude of their rooms. Shut away from the world, they spend hours in private contemplation of whatever they dare not discuss with even their most trusted friends and relations. This practice is perhaps more prescriptive than descriptive, however: something Austen believed Regency ladies should aspire to, even if it was not so common in practice. As J. A. Kearney writes in “Jane Austen and the Reason-Feeling Debate,” Austen’s characters pursue

a mode of introspection which promotes and sustains crucial process of self-insight…The kind of reflection that Jane Austen has in mind is voluntarily chosen by the individual in order to achieve self-understanding and greater awareness of the feelings of others…Much as the process of self-examination is necessary, Austen does not envisage it as an easy one.

These constant retreats into self constitute the most significant difference between Austen’s world and ours: people spend so much time quietly sitting and thinking, if only because there’s nothing else to do. Without Netflix, Words with Friends, Twitter, and after-hours email, your choices boil down to: Play cards. Do needlepoint. Go for a long, invigorating walk. Enjoy the occasional ball. All the useful busy stuff is handled by the implicitly massive cast of near-invisible servants, and all the useless busy stuff hasn’t been invented yet.

No wonder the characters fall prey to what Marshall Brown describes in “Emma’s Depression” as a “distinctively feminine boredom” within a “depressed community” in which “[l]ow spirits are epidemic.” Brown sees that depression as the near-inevitable result of “fearful long evenings of backgammon” and (quoting Tony Tanner) the “life-denying stagnancy of a small society which has become airless, claustrophobic, inert, and even moribund”.

Brown’s description makes me feel grateful for information overload—until I note how Emma is transformed by a process of quiet reflection, or how Eliza Bennet is restored by a half-hour alone in her room. For all the parallels between their busy sociability in drawing-rooms and ballrooms and our busy sociability via social networks and SMS, their dull and proper society afforded them a respite that ours does not.

Sure, we could turn off our phones, but how many us have that kind of self-restraint? The closest I can get is to use my phone to dive back into Austen’s world, and imagine how it would feel to take off my social media corset: to balance a day of nonstop interaction with a quiet half-hour inside an undistracted mind.

Share Tweet Email Print
Have a correction or comment about this article?
Please contact us.
Jane AustentechnologyStudies in English Literature, 1500-1900Studies in RomanticismThe Review of English StudiesTheoria: A Journal of Social and Political Theory 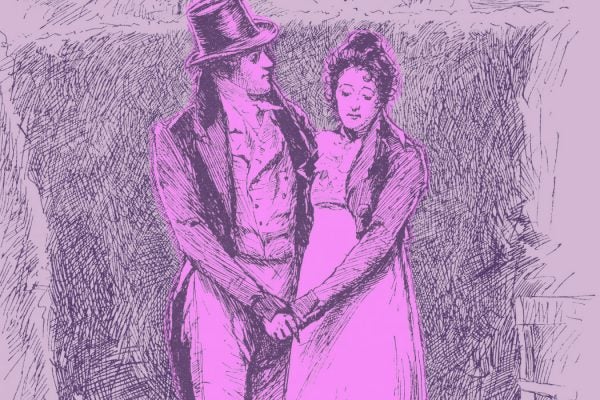 Why are Jane Austen books still so beloved? A linguist argues it has more to do with Austen's masterful use of language than with plot.