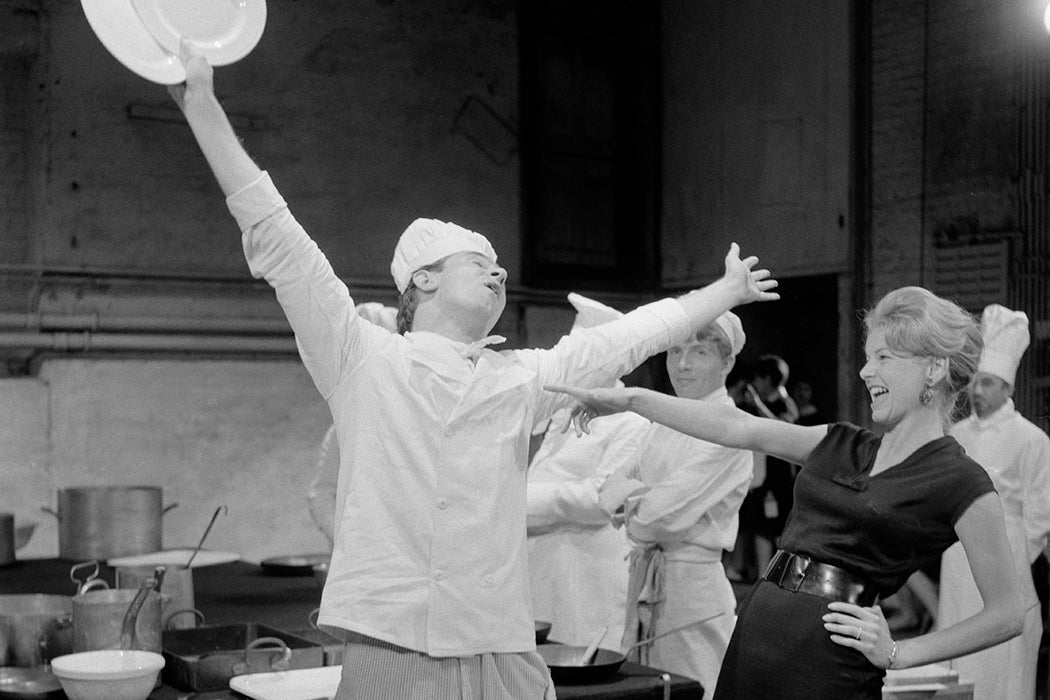 Actors Robert Stephens as a cook and Mary Peach as waitress Monique during rehearsals for the play 'The Kitchen' by Arnold Wesker at the Royal Court Theatre in London, 27th June 1961.
Getty
By: Erin Blakemore
3 minutes
Share Tweet Email Print

During the mid-twentieth century, homosexuality was criminalized, stigmatized, pathologized, and reviled, forcing LGBT people to hide their sexuality and shoving queerness into the closet.

Or was that necessarily the case?

Published years before Stonewall, The Gay Cookbook belies that narrative. And according to historian Stephen Vider, it set up a powerful alternative to the era’s heteronormative domestic mores.

Provocative, campy, and proud of it, the book featured recipes for everything from fruit salad to “swish steak.”

Vider situates the book smack dab in the middle of a cultural revolution in progress, one that brought gay men to the fore: “As courts struck down obscenity laws in the early 1960s, books and magazines about and targeted at gay men proliferated as never before—and could be produced and purchased with far less fear of legal sanction.” And so, in 1965, Doubleday published The Gay Cookbook. Provocative, campy, and proud of it, the book featured recipes for everything from fruit salad to “swish steak.” It was written by Lou Rand Hogan, a chef and gay man who challenged the era’s prevailing notion of queerness as deviant and dangerous.

Gay men had long communed in public spaces like parks and bathhouses—places endangered by police surveillance and tainted with the possibility of being outed or arrested. Vider puts The Gay Cookbook inside a vanguard of gay domesticity instead, and explains why the home—so strongly associated with the oppression of the closet and the exploitation of women’s labor—has been neglected by many scholars of twentieth-century sexuality.

With deep roots in the campy subcultures of theater and the luxury tourism industry, Hogan (born Louis Randall) penned a tongue-in-cheek cookbook with a crossover audience due to a “larger cultural fascination with camp.” Described by Susan Sontag the year before The Gay Cookbook was published, camp was seen as “a hip, new trend” to publishers. The Gay Cookbook was advertised as “a wild wacky book” and came with jaunty illustrations of gay men cooking and entertaining. But by creating intentional camp aimed at gay men and sold as palatable and trendy to straight people, Hogan helped expose the very normalcy of queerness—after all, everyone needed to eat.

Gay domesticity would later become a bête noir of the gay liberation movement, which lambasted men whose lives and homes were judged as too campy, too effeminate. But Hogan kept writing about gay domesticity as “Aunty Lou” in a food column that ran in the Los Angeles Advocate through the 1970s—tongue-in-cheek and chatty to the last.

Vider sees Hogan not as a relic but as a renegade who slyly questioned his era’s visions of gender, domesticity, and sexuality by appropriating their forms and turning them on their heads. Queer people could and did find domestic happiness in the mid-twentieth century, and Hogan helped normalize their lives and showcase the potential for domestic joy. By daring to attach that joy to his public portrayal of gayness, Hogan challenged the status quo—one recipe at a time. 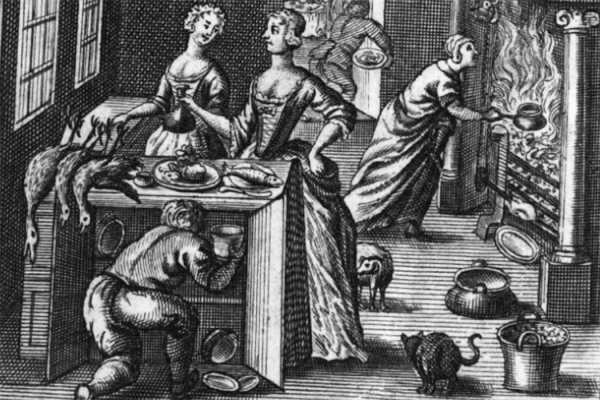