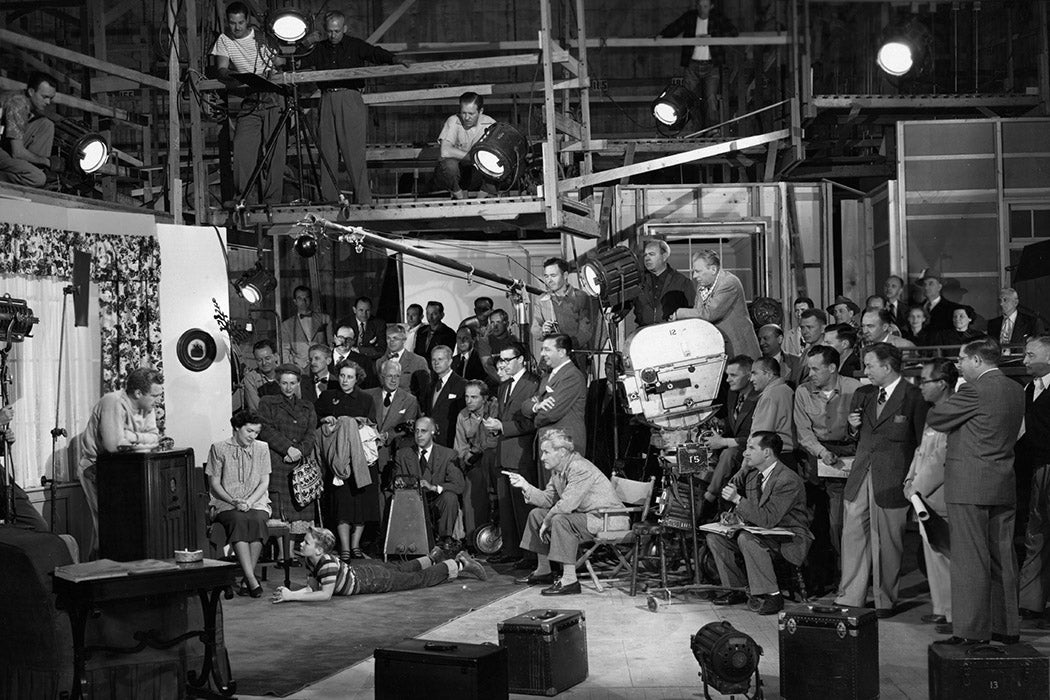 The technicians, craftsmen and studio personnel - the small army of workers behind the scenes - during the filming of MGM's The Next Voice You Hear
Getty
By: Livia Gershon
2 minutes
Share Tweet Email Print

The International Alliance of Theatrical and Stage Employees (IATSE) has voted to authorize a strike. Among other demands, the behind-the-scenes workers in the film and television industries are seeking better compensation for the work they do on shows destined for distribution as streaming content. As communication scholar Michael C. Nielsen explains, this is far from the first time IATSE has responded to changes in the media world.

Nielsen writes that early local theatrical companies in the United States operated as cooperatives, with actors and directors sharing responsibility for jobs like selling tickets, and splitting profits equally. But in the late nineteenth century, touring troupes became the dominant model. They generally operated out of New York, traveling the country by railroad. With this shift came more job specialization, and the exploitation of stage mechanics in many places.

“Even though the theatrical carpenters pounded nails and cut wood, they were also part of a unique socio-economic formation: show business.”

And so, in 1893, workers formed IATSE. The union established minimum pay rates, demanded an eight-hour workday, and created definitions of specific jobs with rules to prevent managers from undercutting union members by hiring less-qualified workers. Unlike craft unions, which organized workers based on their jobs—electricians in one union, carpenters in another—IATSE was an industrial union from the start.

“The nature of theatrical work itself and the peculiar nature of the theatrical industry produced a kind of solidarity different from that found in the building trades,” Nielsen writes. “Even though the theatrical carpenters pounded nails and cut wood, they were also part of a unique socio-economic formation: show business.”

But as IATSE gained power among theatrical workers in the early twentieth century, a new entertainment industry was taking shape. Increasingly, people were going to see movies, not live performances. And Los Angeles was establishing itself as a place to find cheap labor of all kinds, including both onscreen and backstage movie workers.

Nonunion workers in L.A. found work by “panning the gates”: waiting outside the studios each morning. If they found a job, their pay rates, hours, and working conditions were determined by management alone.

IATSE Local 33 began organizing film workers across the Los Angeles area, Nielsen writes. But as the film industry grew, the union had trouble keeping up. It also faced competition from craft unions representing specific job specialties. And in 1916, producers formed the Motion Picture Producers’ Association (MPPA) to fight all the unions in the industry.

The infighting and management opposition put a damper on workers’ power, but IATSE survived to become a significant force in both film and television in the twentieth century. Today, as the entertainment industry shifts once again, it faces yet another fight over how the industry’s behind-the-scenes workers are treated.