How Judi Bari Tried to Unite Loggers and Environmentalists

The radical environmentalist had a background in labor organizing and wanted to end the misogyny of the movement and the logging industry alike. 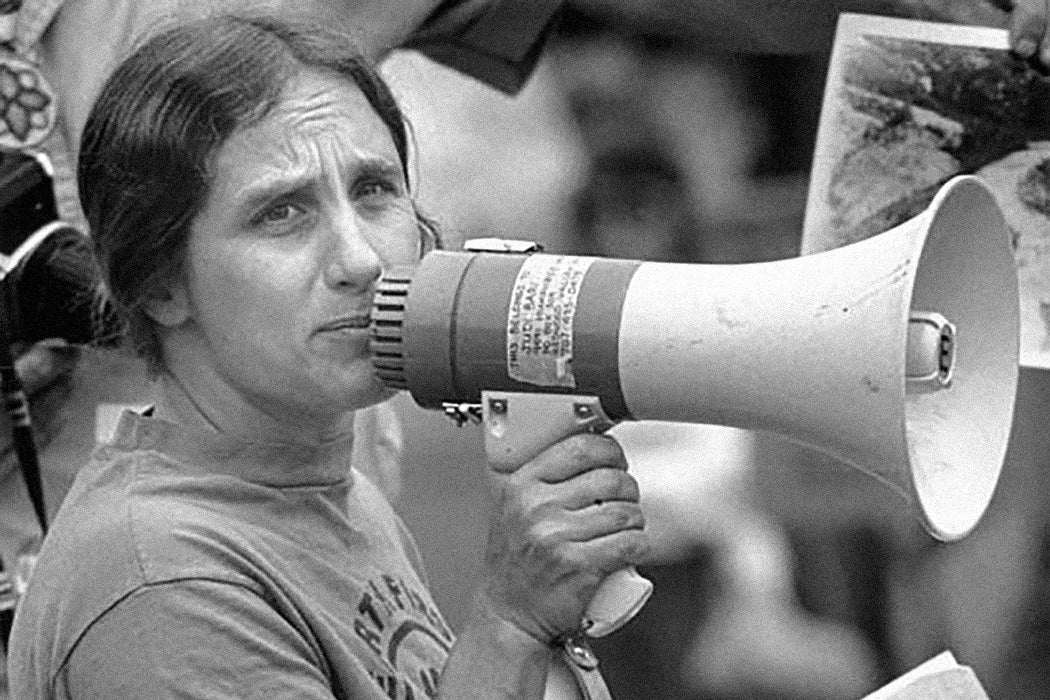 Judi Bari speaks at an Earth First! forest rally in 1990 before she was bombed on the eve of Redwood Summer.
Photo © by Evan Johnson/Impact Visuals
By: Matthew Wills
3 minutes
Share Tweet Email Print

The killings of conservationists Homero Gómez González and Raúl Hernández Romero in Michoacán, Mexico, are only the latest examples of deadly battles over resource extraction on a planet under attack. The Monarch butterfly sanctuary that Gómez González set up, which Hernández Romero gave tours of, threatened the work of illegal loggers, the gangs that back them, and the consumers who fuel them all. Their mysterious deaths might never be solved.

Unfortunately, that kind of violence against activists is not unprecedented in the global environmental movement. For example, nobody has ever been found responsible for the bomb attack on activists Judi Bari and Darryl Cherney in May 1990. Both survived the blast—and were initially charged with bombing themselves. The charges were soon dropped, but after Bari’s death from breast cancer in 1997, a civil jury found that both the FBI and the local police department had violated her civil rights.

Judi Bari’s life and work is worth re-examining as resource fights continue to flame across a stressed planet.

As political scientist Jeffrey Shantz shows, Judi Bari’s life and work is worth re-examining as resource fights continue to flame across a stressed planet. Bari was a major force in ecofeminism, helping to turn the activist group Earth First! away from its early reputation as self-styled “ecowarriors” and “rednecks and cowboys for wilderness.” Shantz argues that the “wilderness fundamentalism” of Earth First! was masculinist and misanthropic. Some in Earth First!, as their emphatic name suggests, welcomed depopulation of humans by famine and disease. They sported bumper stickers proclaiming “Malthus Was Right” and thought of loggers as the enemy.

Bari, in her own words, sought “the feminization of Earth First!” by adding feminism and labor struggles to different forms of radical environmentalism. Coming from a background in labor organizing, she tried to set up a logger’s union.

As Shantz writes, “Rejecting the Earth First! mythology of timber workers as ‘enemies’ of nature, Bari sought to unite workers and environmentalists in pursuit of sustainable forestry practices against the devastating approaches favored by multinational logging corporations.”

A worker-environmentalist coalition was the last thing a multinational corporation wanted to see on the road to clear-cutting. The timber industry preferred to divide workers from environmentalists, and elements on both sides were happy to oblige. This set the stage for the “Timber Wars” of the late 1980s and 1990s, which were first concentrated in Northern California. Shantz explains:

The context for the pitched battles raging in Northern California was one of rapid job loss and eroding communities. Industry spokespersons denied responsibility for the decline in logging jobs, preferring to place the blame on environmentalists. […] Practicing “infinity logging,” the logging firms were determined to take out every tree as quickly as possible.

In the Timber Wars, Shantz continues, “environmentalists were routinely subjected to violence, with loggers driving through picket lines and felling trees into demonstrations.” Activist David Chain was killed by a tree suspiciously felled onto his campsite in 1998. Loggers, meanwhile, feared tree spiking, the “ecotage” strategy of spiking trees with metal to foil saws and milling equipment.

In 1990, Bari came out against tree spiking and EF! groups in the Northwest followed her example. Battling misogyny in both Earth First! and the timber industry, Bari wanted Redwood Summer, the national convergence of activists gathering to try to save old growth forest, to be nonviolent. The wounds from the pipe bomb kept her from going, however. But over 3,000 protesters showed up, helping to preserve Headwaters Forest’s 2,000-year-old trees.

“Bari saw that piecemeal set-asides were not sufficient,” says Shantz. “The only way to preserve wilderness was to transform social relations. This meant that Earth First! had to be transformed from a conservation movement into a social movement.”

The same could probably be said for all environmental organizations.

Editors’ Note: An earlier version of this article misidentified Darryl Cherney as Michael Cherney. The error has been corrected.