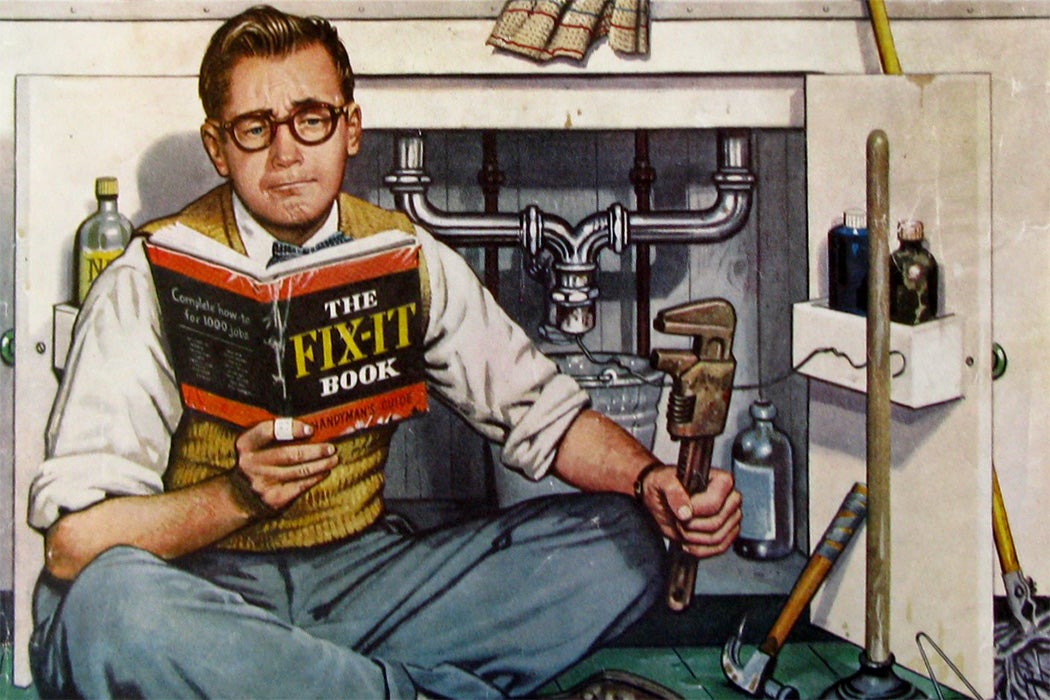 Many office workers stuck at home right now are finally getting around to long-neglected home repair projects (hopefully only in cases where they don’t need to going out shopping for non-essential supplies). Although today this kind of work is embraced by people of different genders, for men it might seem like a welcome throwback to old-fashioned self-reliance.

But, as historian Steven M. Gelber writes, the idea of do-it-yourself projects as a mark of manhood is not as old as you might think. It emerged only in the twentieth century.

By the last decades of the nineteenth century, Gelber writes, “industrialism had broken the farmer/artisan tradition of manual competence. Men could, if they wished, take up tools around the home, but very few seem to have wanted to, and there was no general expectation that they should.”

“Any fool can write a book but it takes a man to dovetail a door.”

Having left the farms where many of their grandfathers labored, middle-class Victorian men were apparently quite content to confine worklike activity to the office. In their off hours, many avoided spending a great deal of time in the domestic space of their homes, which were coded as feminine. Instead, they often preferred heading to fraternal meetings or participating in the growing culture of organized sports.

Gelber writes that even homeowners who were far from rich generally hired professionals to handle home repairs, including small ones.

Things began to change in the late nineteenth century. Suburbs began to grow, removing white-collar men from urban social life. Overstuffed and highly detailed Victorian architecture and home furnishings—understood as distinctly feminine—gave way to the simplicity of Arts and Crafts and colonial designs. Increasingly, masculinity became tied to knowing how to use everything in a toolbox. As writer Charles F. Lummis put it, “Any fool can write a book but it takes a man to dovetail a door.”

Gelber writes that the rise of “Mr. Fixit” was partly a byproduct of increased homeownership. In 1890, only 37 percent of US dwellings were owner-occupied. By 1960, it was up to more than 60 percent.

Beyond that, though, work around the house was increasingly understood not as an annoying necessity but as a soothing hobby for those stuck in the office all day. A 1910 article titled “Recreation with Tools” advocated for at-home projects to “maintain that balance and poise—physical and mental—which is so essential to right living.”

Other historians have pointed to a growth in “masculine domesticity” in these years, with husbands and wives often working together in the home. But Gelber argues that do-it-yourself home repairs represented something else, which he refers to as “domestic masculinity”—male homeowners taking on work traditionally done by professional craftsmen.

“Such activities were exclusively male and doing them gave men a sense of special ability that may well have compensated for some loss of masculine affirmation at work,” he writes.

Do-it-yourselfism flourished in the decades that followed, through the difficult years of the Great Depression and the growth of suburban homeownership after World War II. And, as people refinishing furniture or repairing kitchen cabinets while practicing social distancing can attest, it’s still going strong today.