How “Carpe Diem” Got Lost in Translation

“Carpe Diem” doesn’t actually mean “seize the day.” The fact that we understand it that way suggests we are more traditional than we like to admit. 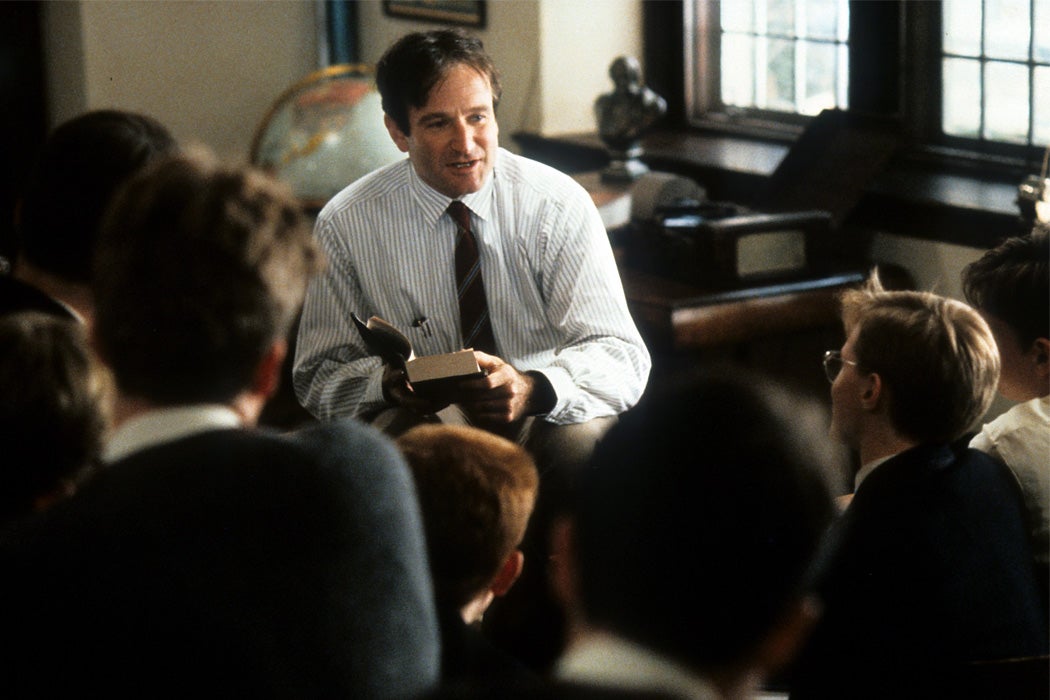 This year is the thirtieth anniversary of a certain influential movie that popularized standing on desks as a legitimate teaching aid for many an earnest educator—even presidential candidates have gotten the memo—and catapulted an obscure phrase from a long dead language into the public consciousness and mainstream popular culture.

That film is, of course, Dead Poets Society. The phrase is “carpe diem,” taken from Roman poet Horace’s Odes, written over 2,000 years ago. As everyone and their grandmother knows by now, “carpe diem” means “seize the day.” “Carpe diem. Seize the day, boys. Make your lives extraordinary,” encourages Robin Williams in the role of textbook-ripping English teacher John Keating. (Oddly enough, three years earlier Williams had starred in a film called “Seize the Day,” so I suppose he was pretty serious about getting this message out there). The phrase, and its accompanying philosophy, has gone on to inspire countless people in how they live their lives. Striking while the iron is hot and taking the bull by the horns (as we may say in more well-worn fashion), even the formidable Dame Judi Dench got the motto tattooed on her wrist for her 81st birthday. It’s an enduring thought that, perhaps, motivates us to see the world a little differently from the norm.

Metaphors may map to similar meanings across languages, but their subtle differences can have a profound effect on our understanding of the world.

Meanwhile, pedantic Latin teachers have been gritting their teeth trying not to sound their barbaric yawps because (surprise!) “carpe diem” doesn’t really mean “seize the day.” As Latin scholar Maria S. Marsilio points out, “carpe diem” is a horticultural metaphor that, particularly seen in the context of the poem, is more accurately translated as “plucking the day,” evoking the plucking and gathering of ripening fruits or flowers, enjoying a moment that is rooted in the sensory experience of nature. “Gather ye rose-buds while ye may” is the famed Robert Herrick version. But let’s not be persnickety; aren’t these merely two different metaphors that mean essentially the same thing?

Well, yes and no. It’s an example of one of the more telling ways that we mistranslate metaphors from one language to another, revealing in the process our hidden assumptions about what we really value. Metaphors may map to similar meanings across languages, but their subtle differences can have a profound effect on our understanding of the world.

Gathering flowers as a metaphor for timely enjoyment is a far gentler, more sensual image than the rather forceful and even violent concept of seizing the moment. It is not that as a culture we can’t understand what it means to harvest something when it’s ready—we do have related metaphors like “making hay while the sun shines,” after all. But there is something in the more Hollywood phrasing “seize the day” that has clearly resonated with people in the last thirty years. We understand the phrase to be, rather than encouraging a deep enjoyment of the present moment, compelling us to snatch at time and consume it before it’s gone, or before we’re gone.

As John Keating teaches his students to value their own individuality above conforming to rules, he stands on his desk, as he says, not to feel taller, but to remind himself that we must constantly look at things in a different way. By seizing the day rather than plucking it like a flower, however, we’re actually conforming to hidden cultural values that we all share, not looking at the world in a different way from the norm, but in the same way as everyone else. These are cultural values that some argue have been co-opted by advertisers to sell us more things that we’re told will make us happier.

For Australian philosopher Roman Krznaric, author of Carpe Diem Regained, the “hijacking [of carpe diem] is an existential crime of the century–and one we have barely noticed.” Krznaric is concerned that the philosophy has come to mean something else, almost the antithesis of what Horace’s words actually meant. “Seizing” the day brings up images of people taking what they can get, people who can get things done—active, self-reliant individuals who are agents in pursuit of their own happiness, reflected in the #YOLO-infused, instant-gratification-obsessed consumer culture that exhorts us to “Just Do It” by buying products. Even life experiences have become commodities, in a world where people can no longer afford to buy a place to live. We’re encouraged instead to buy into precarious economic lifestyles celebrated by ad campaigns like freelance startup Fiverr’s “You eat a coffee for lunch… Sleep deprivation is your drug of choice. You might be a doer.” This is the “carpe diem” aesthetic of a modern world of aggressive action, not all that different from the “work till you drop” mentality of industrialism.

Of course, translation is notoriously difficult when just dealing with word and grammatical correspondences between languages (which is one of the reasons a sci-fi style universal translator doesn’t exist yet). Throw metaphor into the mix, and even if it isn’t a 2,000-year-old poem in a dead language, it can seem well-nigh impossible to get an accurate interpretation of the spirit of the original work. Understanding what metaphors really convey can be a tricky thing.

Metaphor is the Air We Breathe

Though we often think of metaphor as being largely literary, a matter for rhetorical language, these private and unique metaphors of poets are not the ones we encounter most in our daily lives. Metaphor is everywhere, from idioms to conventionalized and lexicalized metaphors institutionalized in everyday language, so well-worn that many have declared them dead and meaningless. Words like “beforehand” and “ahead” are metaphors we don’t even notice that allow us to locate our thoughts in terms of bodily spaces. We may no longer notice all the metaphorical assumptions we make when we use them, but cognitively, those images have an impact. When we say things in English like “you ran out of time/lost time/wasted time/spent time/gave time,” it’s clear we unconsciously conceptualize time as a valuable and limited zero-sum resource, like money. Yet time is obviously not money.

These metaphors are so pervasive that they are fundamental to how we culturally conceive of the world. George Lakoff and Mark Johnson’s seminal work “Conceptual Metaphor in Everyday Language” brought to light how the conceptual metaphors that we use in everyday language can powerfully affect how we experience life, how we think and how we act, largely without noticing it. We frame concepts like arguments as a war to be won (“He attacked every weak point in my argument,” “His criticisms were right on target“), time as a commodity (“I don’t have enough time to spare for that,” ” Is that worth your while?”) and happiness as up and sadness as down (“That boosted my spirits,” “I’m feeling down”). We do this a lot, we think of abstract things as objects, containers, resources that can be taken, used up and thrown away, and we act like common interactions are fights, battles, wars and other aggressive acts where we need to attack and defend ourselves from an enemy.

This is how we normally talk, although it could easily be a different way. Lakoff and Johnson wonder how we might view arguments differently if we thought of them as a dance rather than war, where the goal is to perform in a balanced and aesthetic way. Happiness could be as wide as it is up, for example, but we talk of the “height of ecstasy,” not the “breadth of ecstasy.” These metaphorical frames seem so basic that within a culture we can instinctively understand them when a new, similar example appears, though they may not be universally understood across cultures—or even all that old. As Lakoff and Johnson put it:

These practices are relatively new in the history of the human race and by no means exist in all cultures. They have arisen in modern industrialized societies and structure our basic everyday activities in a very profound way. Corresponding to the fact that we act as if time were a valuable commodity, a limited resource, even money, so we conceive of time that way. Thus we understand and experience time as the kind of thing that can be spent, wasted, budgeted, invested wisely or poorly, saved or squandered.

Or perhaps seized, by force.

Seizing Hold of “Seize the Day”

“Seize the day” resonates precisely because it isn’t culturally foreign to our experience of time and happiness. It makes instinctive, meaningful sense, given how similar it is to many other metaphors we use about the world, in a way that plucking, gathering, or harvesting the day may not. In this, we’re of a mind with others from the same culture. When these conceptual metaphors sound apt to us, they show what is deeply embedded in a culture as ideologically valuable and they reflect how we construct the world, as Philip Eubanks would have it, through the stories we tell each other. Bigger, rather than smaller, is better; more, rather than less, is better. Good is up (“things are looking up”), having control or force is up (“I am on top of the situation”), virtue is up (“she has high standards”), success is up (“we came out on top”). Particularly in American English, concepts like debate, trade, business are described often in aggressive, militarized language, as if they were wars and battles (“The competitor is our friend; the customer is our enemy” runs one informal company motto).

When we notice conceptual metaphors lurking in our language, it’s easy to see that the world could be conceived of very differently, and we don’t even have to stand on a desk to do it. So while we are busy seizing the day, hustling in the dog-eat-dog jungle out there, crushing it and killing it in our aggressive, metaphorical pursuit of success, it might make sense to meander down nature’s garden somewhere, stop a while and smell the roses, even if you can’t spare the time to gather your rosebuds while you may.

Editors’ Note: An earlier version of this referred to philosopher Roman Krznaric as Austrian; in fact he is Australian.