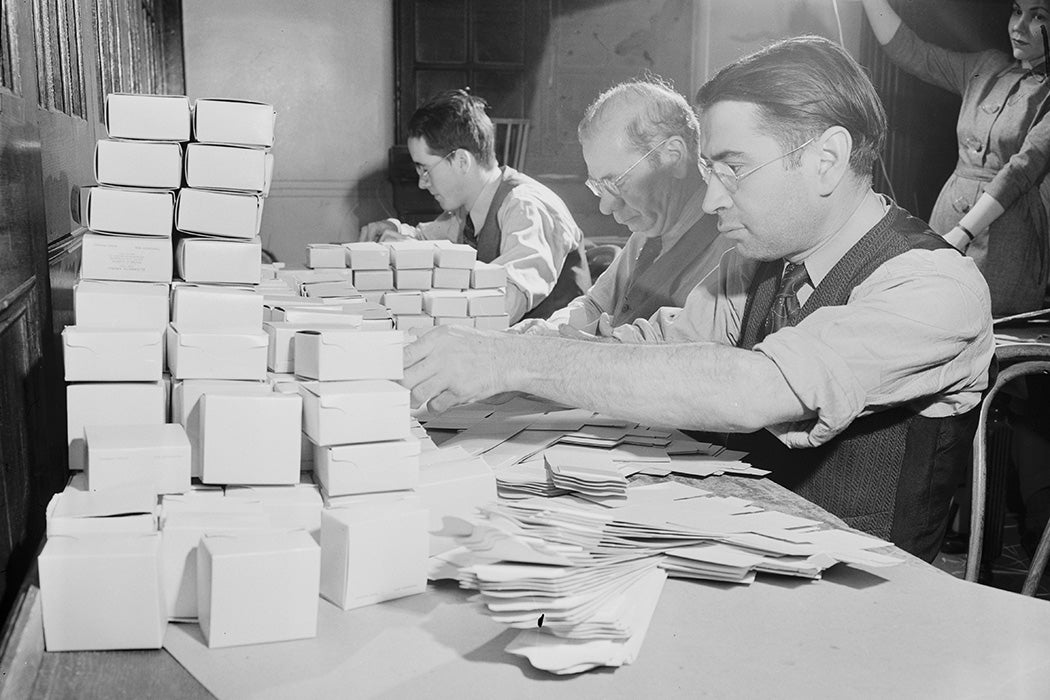 Blind men working on boxes for Elizabeth Arden cosmetics at the Lighthouse, an institution for the blind in New York City, 1944
via LOC
By: Matthew Wills
3 minutes
Share Tweet Email Print

The Americans with Disabilities Act of 1990 is now more than three decades old, but the roots of disability rights go much deeper. Historian Felicia Kornbluh explores the efforts of the National Federation of the Blind (NFB) to organize people who were visually impaired during the 1950s.

Formed in 1940, the NFB was “the first national organization in U.S. history led exclusively by blind men and women,” according to Kornbluh. But its “insouciance…was an insult and perhaps a threat to the public and private bureaucracy for the blind that had developed by the 1950s.”

The NFB argued that people who were blind needed to be participants in the crafting and implementation of policies and programs that concerned them. But the idea was resisted by self-styled professionals who acted as advocates for the visually impaired, without necessarily being so themselves.

Blind workers weren’t even covered by the Fair Labor Standards Act of 1938, which set standards for safety and pay.

One focus of the NFB’s activism was labor, particularly in the “sheltered shops” of charities and public agencies. Sheltered shops employed blind people below minimum wage, since many people without disabilities assumed that blind workers would never be that productive. Blind workers weren’t even covered by the Fair Labor Standards Act of 1938, which set standards for safety and pay.

Clashes over collective bargaining ensued. The National Council of State Agencies for the Blind was unanimous in its 1956 statement of its lack of “faith or confidence” in the NFB. One of the council’s representatives accused the NFB of “subversive methods,” which was neither the first nor the last bit of red-baiting aimed at the organization.

The NFB pushed for a federal law for the “right of blind persons to join organizations of the blind,” in the words of the bill proposed by Senator John F. Kennedy in 1957. But according to Kornbluh, the mainstream organizations for blind people worked to delay congressional hearings and argued instead that a commission be formed. The head of the National Rehabilitation Association argued, “blind people like other handicapped people sometimes have unreasonable ambitions.”

The NFB stressed that it was fighting for labor rights instead of civil rights, which helped it gain supporters in Congress. Hearings on the rights of blind people in the workplace took place over a full week in March 1959. NFB witnesses stressed that they were ordinary people “who worked hard, cared for their families, and held jobs that virtually everyone believed were impossible for them.”

Nevertheless, the NFB didn’t get the federal law its leaders wanted. They were stymied by the opposition, internal division, and politicians who moved on to other things. They did get similar laws passed in some states, however. And the 1964 federal Economic Opportunity Act mandated something close to the NFB goal—“maximum feasible participation” by those for whom government programs were crafted.

The NFB’s pioneering work would be taken up in the late 1960s by the disability rights movement as a whole, when “nothing about us without us” became a rallying cry.

Disability, Antiprofessionalism, and Civil Rights: The National Federation of the Blind and the "Right to Organize" in the 1950s
By: Felicia Kornbluh
The Journal of American History, Vol. 97, No. 4 (March 2011), pp. 1023-1047
Oxford University Press on behalf of Organization of American Historians

How have workers around the world sought to change their conditions, and how have racial divisions affected their efforts?