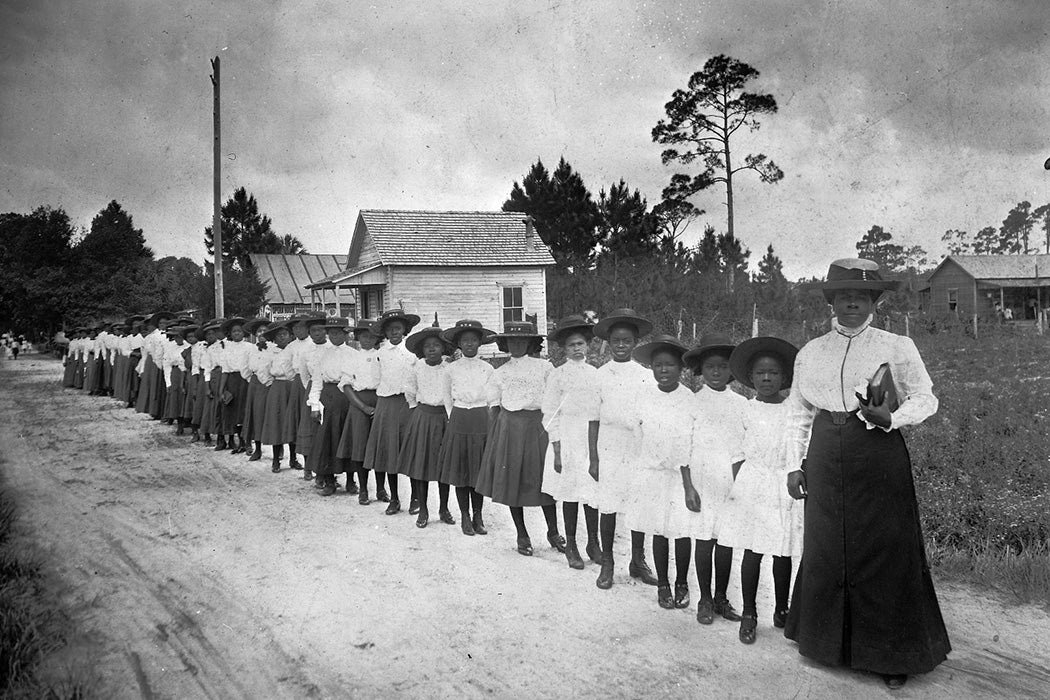 Mary McLeod Bethune with a Line of Girls from her School in Daytona Beach, Florida, 1905
via Wikimedia
By: Livia Gershon
3 minutes
Share Tweet Email Print

Students are beginning the 2021 school year facing disruptions and dangers—including outbreaks of COVID-19. Since the start of public education, there have been many moments of chaos. And some of them, along with some of the biggest hopes for public schooling, came in the years after the Civil War, as historian Heather Andrea Williams writes.

From the moment US Army troops arrived in southern communities, newly freed people sought ways to gain education—and, particularly, to learn to read and write.

“In slavery, the very act of learning to read had become a secret form of resistance…”

“In slavery, the very act of learning to read had become a secret form of resistance, but in its aftermath freedpeople transformed the act of being literate from a clandestine act to one of life’s necessities,” Williams writes.

Initially, people who couldn’t read often sought out anyone who had managed to gain some literacy and persuaded them to give them lessons. They also called on northern missionary groups to send trained teachers and built their own schools to accommodate them. Many children counted the “blue back speller,” Noah Webster’s spelling book, as a prized possession.

Teachers were soon overwhelmed with students, Williams writes. One missionary teacher in Athens, Georgia, described limiting her school to two hundred students, only to have one father plead to have his two children allowed in.

“Do let them come if you please, m’am, and if you can’t teach them even a little, just let them sit and hear what the rest learn,” she recalled him saying. “They’ll be sure to catch it.”

The teacher relented and allowed those children, and many more, to join the school.

In a Hilton Head, South Carolina, plantation, school took place in a piazza that surrounded the house where the teachers lived. Class started at 9 a.m., but children began showing up at 6:30, while the teachers were still eating breakfast. One teacher remarked that the “enthusiasm of the children to learn is intense. Their school-hours seem like one bright holiday, and their progress is remarkable.”

Prior to the creation of universal systems for funding the schools, Williams writes, parents paid the teachers in money and fuel when they could, or sometimes in eggs, flowers, rice, or candy. When Black teacher and Civil War veteran Elijah Marrs moved to a new community in Kentucky, locals showered him with gifts in the hopes of persuading him to stay.

Families faced serious obstacles to schooling. Many kids had inadequate food and clothing, and harsh living conditions led to outbreaks of smallpox and frequent cases of pneumonia. Not all the teachers in the local schools were competent. And not all of them respected the intellectual capacity of their Black students.

Still, students persisted. They often surprised white teachers from the North who had arrived with the assumption that, even if Black children weren’t intellectually inferior to white ones, generations of slavery had dulled their abilities.

Yet, as quick as they were to learn, the graduates of these new schools soon faced rising barriers to full participation in American life in the post-Reconstruction South.

'Clothing Themselves in Intelligence': The Freedpeople, Schooling, and Northern Teachers, 1861-1871
By: Heather Andrea Williams
The Journal of African American History, Vol. 87, New Perspectives on African American Educational History (Autumn, 2002), pp. 372-389
The University of Chicago Press on behalf of Association for the Study of African American Life and History