How Aztecs Reacted to Colonial Epidemics 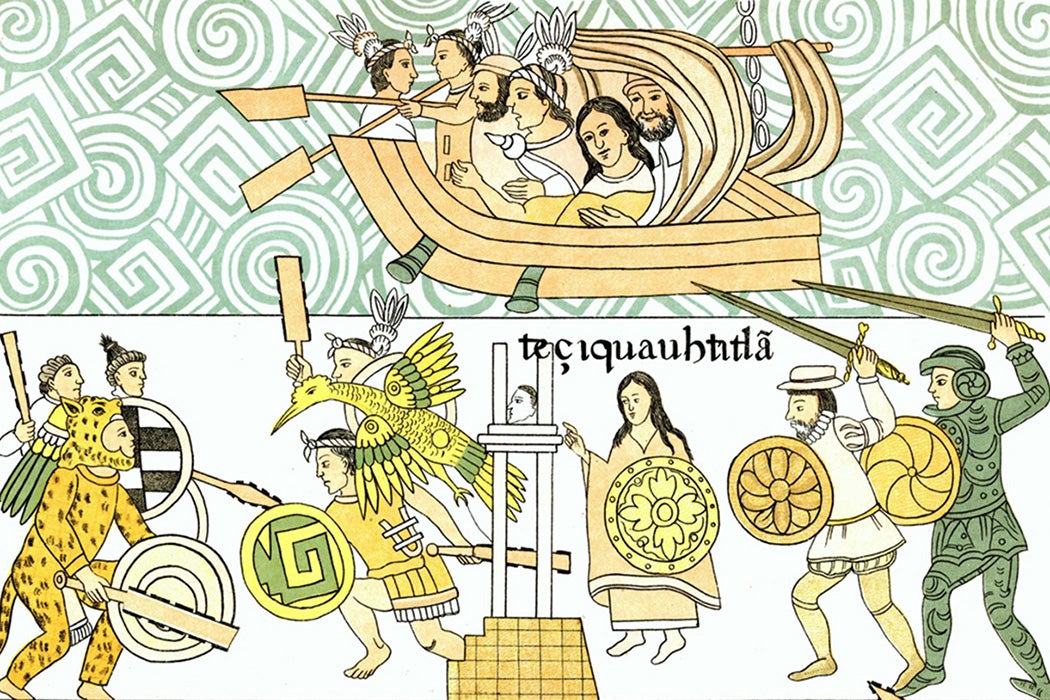 Devastating epidemics have been part of American history at least since the arrival of the first Europeans. Then as now, Native Americans and people of African descent have been disproportionately affected by diseases brought to the “New World” by Europeans. As Jeffrey Ostler noted in the Atlantic, these effects are compounded by the colonial legacies of slavery and by economic discrimination. In school we read and learn about the epidemics from the perspective of the European conquerers. However, reports going back to the early colonial period from indigenous peoples show their perspective in grappling with the upheaval of their ways of life.

These reports include the voices of Aztec authors from central Mexico, who offer us vital testimonies of adaptation and resilience. A natural response to the multiple catastrophes befalling the colonial-era Aztecs would have been despair. While these sources clearly display a deep sense of sorrow, despair was far from the only response. Instead, native people—by far the majority of colonial Mexico’s population—found multiple ways of coping and evolving.

Life in the Time of Cocoliztli

The Spanish conquests in the Americas would not have been possible without disease. That’s because pathogens that were mostly unknown on the continents preceded the conquistadors in both Mexico and Peru. In Mexico, the pestilence reached the Aztec capital, Tenochtitlan, before its fall in 1521. Pathogens also reached Peru, inciting a civil war among the Incas. Both of these situations were extremely favorable for Spain. The plague—cocoliztli—was the most devastating post-conquest epidemic in large parts of Mexico, wiping out somewhere around 80 percent of the native population.

“Somewhere around” because population estimates are difficult to come by, with extrapolations made from incomplete colonial sources that date back to precolonial times. For the ethnohistorian Charles Gibson, there is no “sure method for determining whether the later [colonial era] counts were more accurate or less accurate than the earlier ones,” so that “the magnitude of the unrecorded population seems unrecoverable.”

Nevertheless, Gibson’s best estimate is a population of 1,500,000 inhabitants of the Valley of Mexico at the time of first contact with Europeans. There was a sharp fall of about 325,000 by 1570; a drastic fall to about 70,000 by the mid-seventeenth century; followed by slow growth to about 275,000 by 1800. Gibson’s figures are simply staggering. They give us a rough impression, but tell us little about the suffering and massive social upheaval caused by these catastrophes.

According to the “Virgin Soil” theory, the epidemics were so desctructive because “the populations at risk have had no previous contact with the diseases that strike them and are therefore immunologically… defenceless,” as the psychiatrist David Jones writes in the William & Mary Quarterly. The theory is still widespread, often devolving into vague claims that indigenous people had “no immunity” to the new epidemics. By now we know that the lack of immunity played a role, but mostly early on. Current research instead emphasizes an interplay of influences, for the most part triggered by Europeans: slavery, forced labor, wars, and large-scale resettlements all worked together to make indigenous communities more vulnerable to disease.

According to a group of scholars writing in the journal Latin American Antiquity, in colonial Mexico, “by the mid-17th century, many… communities had failed, victims of massive population decline, environmental degradation, and economic collapse.” This is why it’s crucial for today’s scholars to emphasize the influence of colonial policies—as opposed to the Virgin Soil theory, which shifts responsibility away from Europeans.

One peak of the epidemic occurred in the 1570s. The exact pathogen that caused that epidemic is not yet known. Some scholars have speculated that, since it struck mostly younger people, it might have been something unique to the New World and reminiscent of the Spanish Influenza outbreak, possibly a tropical hemorrhagic fever. Other recent theories include Salmonella, or a combination of diseases. Native communities were the main victims of this epidemic due to their poverty, malnourishment, and harsh working conditions compared to the Spanish population. It’s important to note that, by then, the Spaniards’ immunity would have played a less significant role than it did in earlier outbreaks.

Three Circles in the Sun

In central Mexico, the descendants of the Aztecs (also known as the Nahua) produced the largest corpus of colonial-era indigenous writings in the Americas. Aztec authors from central Mexico noted their reactions to the epidemics in fascinating detail. Writing 100 years after the Spanish military takeover, they were painfully aware of the consequences of epidemics and colonization: epidemics had taken place before, but the unprecedented scale of the disasters caused widespread incomprehension, sadness, and anger.

Much of the extant writing by Aztec authors dates to the turn of the seventeenth century. Many of the authors had experienced the plague themselves, its effects still fresh in their memories. I want to focus on two pieces of writing: a report by the well-known historian Diego Muñoz Camargo from Tlaxcala, written in Spanish; and an anonymous text in the indigenous language, Nahuatl, from the Puebla region.

The state of Tlaxcala was an enemy of the Aztec Triple Alliance in precolonial times and one of the earliest major allies of Hernan Cortés. For its services to the Spanish, Tlaxcala was rewarded with special rights and maintained a strong tradition of writing history. But this state was also transformed by colonial policies and the epidemics. As Diego Muñoz Camargo, the famous historian from the era, wrote:

In 1576, another great pestilence struck this land, bringing death and destruction to the native population. It lasted over a year and brought ruin and decay to most of New Spain [the Spanish Viceroyalty covering today’s Mexico], as the native population was then almost extinct. One month before the outbreak of the disease, an obvious sign had been seen in the sky: three circles in the sun, resembling bleeding or exploding suns, in which the colours merged. The colours of those three circles were those of the rainbow and could be seen from eight o’clock until almost one o’clock at noon.

This passage demonstrates the great importance of omens for the Aztecs. The native faith persisted but mixed with Christian traditions. The Catholic faith, with its equally strong tradition of omens and prophecies, facilitated the transmission of native rituals and deities.

It is not surprising that the second report, from the smaller community of Tecamachalco, also links diseases with the appearance of a comet. Probably written by the native noble Don Mateo Sánchez, the text shows the extent of the catastrophe in words quite similar to Diego Muñoz Camargo’s:

On the first day of August [of 1576] the great sickness began here in Techamachalco. It was really strong; there was no resisting. At the end of August began the processions because of the sickness. They finished on the ninth day. Because of it, many people died, young men and women, those who were old men and women, or children… When the month of October began, thirty people had been buried. In just two or three days they would die… They lost their senses. They thought of just anything and would die.

Several of Don Mateo’s family members also died, including his wife and the alcalde (mayor) of his quarter. Don Mateo then took over the post of alcalde. One can sense his incomprehension and anguish. The decimation of the indigenous elites is evident throughout his account.

This decimation contributed to the transformation of native societies well into the seventeenth century, including forced native labor and resettlements, the introduction of hierarchical Spanish laws and government, Christianity, and the alphabet. Together with increasing European immigration, the epidemic led to a massive upheaval of indigenous sociopolitical organization and ways of life, especially in the Valley of Mexico.

Don Mateo’s is not the only surviving account of the epidemic from an indigenous perspective. Other anonymous annals from Puebla and Tlaxcala from the era discuss earlier waves of disease, which remained firmly rooted in collective memory more than 100 years after the events. Like Mateo, these sources do not try to account for the origin of the disease, but they provide an idea of the scale and horror of the epidemic and the personal tragedies involved, the uprooting of families, of whole towns.

Meanwhile, the Spaniards’ narratives tried to explain the catastrophic effect the disease had on the indigenous population by pointing to difficult living conditions. But they also interpreted it as divine punishment for paganism and a sign of the native peoples’ alleged inferiority to Europeans. Of course, European remedies such as bloodletting, used in hospitals to treat indigenous patients, worsened conditions instead of healing them. Ultimately, the Spanish Crown feared above all a further loss of cheap or unpaid labour; the priests a loss of souls to be converted.

Despite the harsh conditions, the descendants of the Aztecs did not give up—as has long been claimed in traditional scholarship. As the historian Camilla Townsend has argued, the demographic collapse lent urgency to the projects of major native historians—including the authors I’ve cited in this essay. Nearly all pre-Hispanic sources were destroyed by the Spanish, with some lost over time. The Chalca scholar Domingo de Chimalpahin commented on this confluence of factors: the destruction of sources and abandonment of communities strengthened his sense of responsibility to future generations. By writing history, he attempted to save his ancestors’ past from looming oblivion. Drawing on pre-Hispanic faith, continuing political participation, and recording the histories of their people: these are some of the ways in which Aztecs proactively shaped their lives following colonial devastation.

Centuries of colonial exploitation and violence have made the indigenous peoples of both Americas disproportionately vulnerable to current epidemics. This makes the resilience of indigenous peoples and cultures all the more incredible. Such resilience has developed over more than 500 years, in the face of continual adversity and disregard. Native American peoples provide varied and remarkable testimonies on weathering existential crises. The least we can do, in the midst of the current pandemic, is listen.

Editor’s note: This article has been updated for clarity.