How America Brought the 1957 Influenza Pandemic to a Halt

Microbiologist Maurice Hilleman saw it coming, so the country made 40 million doses of the vaccine within months. 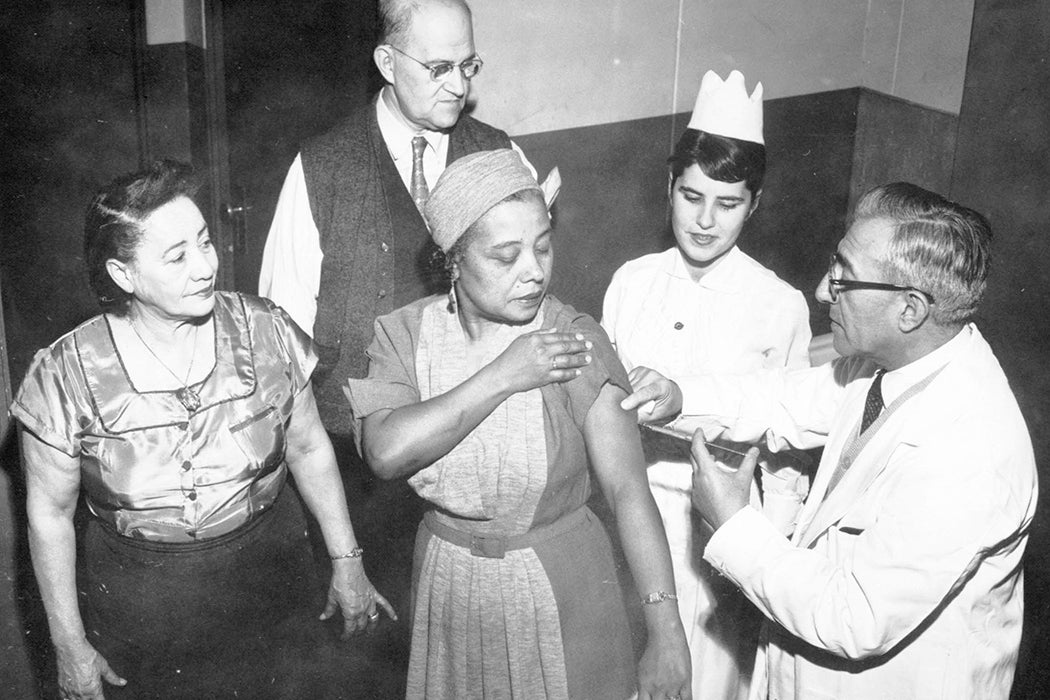 In the spring of 1957, American microbiologist Maurice Hilleman was alarmed by a photo he saw in the New York Times. The photo depicted sick patients being brought into the Hong Kong hospitals by the thousands, with long lines of people waiting to be admitted. “They said, babies had glassy-eyed stares [and I thought], my God this is the pandemic, it’s here,” he had said in an interview years later.

Hilleman, who at the time was with the Walter Reed Army Institute of Research, obtained the virus specimen from a Navy serviceman stationed in Japan and studied it. His analyses showed that this new influenza strain was “distinctly different from type A strains previously isolated from this country and Europe.” Most people didn’t have the antibodies for it. Only a few elderly people who had survived the influenza pandemic of 1889-1890 showed some antibody response to the new strain, which was dubbed the “Asian flu.”

He was able to work directly with vaccine manufacturers—bypassing “the bureaucratic red tape” as he called it.

Hilleman knew the strain would be introduced to America by travelers returning from epidemic areas in the Far East. It was a matter of when, not if. At the time, people couldn’t yet cross the globe in a matter of 24 hours, so unlike today, American doctors, microbiologists and epidemiologists had a little more time to prepare. Hilleman concluded that the new flu would hit the US in the fall of 1957. At the time he was able to work directly with vaccine manufacturers—bypassing “the bureaucratic red tape” as he called it—so he asked them to start making the vaccines. The Public Health Service released the first cultures of the Asian influenza virus to manufacturers on May 12, 1957.

While the new flu wasn’t expected to cause massive outbreaks before fall, it slowly began reaching the American shores during summer. Some of the first outbreaks began among the crews of several destroyers at Newport Naval Station, in Rhode Island. In mid-June some outbreaks happen among Navy recruits in San Diego and Army recruits at Fort Ord, California. Slowly but surely, the disease crept further inland. Over the summer the new strain manifested itself by a series of localized epidemics, afflicting groups of teenagers and young adults. At the end of June, there was an outbreak among high school girls on the campus of the University of California School of Veterinary Medicine in Davis. A student exposed to the Davis outbreak travelled to Grinnell, Iowa, to attend a Westminster Fellowship Conference that commenced on June 28. The student developed the flu en-route, exposing 1,680 delegates from over 40 states and 10 foreign countries to the virus. When this conference ended, anyone who was infected carried it to other states. As different Boy Scout groups travelled around the country in July and August, they too disseminated the flu widely.

However, the vaccination efforts were already underway. In the United States, the Commission on Influenza of the Armed Forces Epidemiological Board has been studying the flu and its prevention by vaccines since the 1940. With novel influenza arriving, the commission began to conduct multiple studies within the military bases, as soon as the influenza vaccines of desired potency were available in sufficient quantities. On July 26,1957 doctors at Fort Ord in California began to inoculate the recruits. Three days later, the Lowry Air Force Base in Colorado began its regimen, vaccinating 775 people within two days. More military bases followed suit. Early testing allowed doctors to establish efficient vaccine doses and produce them en masse.

In October, after schools and colleges had opened, the number of influenza outbreaks increased greatly, afflicting largely young children and teenagers—111 per 1,000 people per week in the age group 5 to 19 years and 28 per 1,000 under 5 years.

“It didn’t let me down, the pandemic of 1957, it began on time,” Hilleman said in his interview years later. But by then, doctors were ready with the remedy—the factories had produced 40 million doses of the vaccine. Despite the outbreaks, the much-feared pandemic was largely avoided, Hilleman later recalled. “That’s the only time we ever averted a pandemic with a vaccine.”