This story is as enriching as the added nutrients in the legendary white bread. 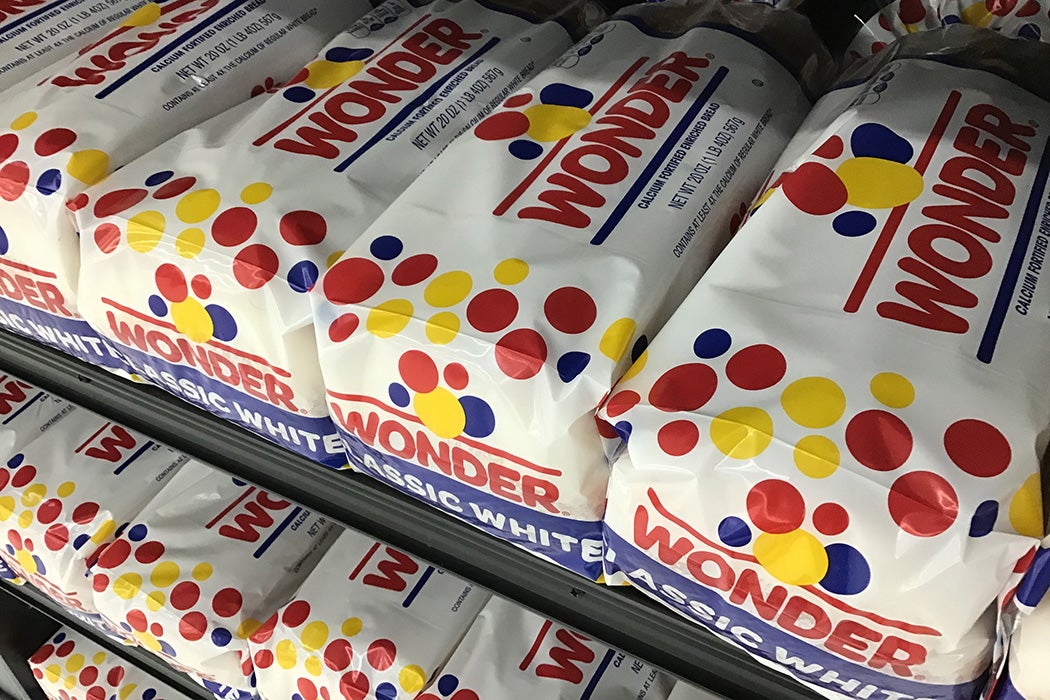 As it celebrates its centennial, the sense of wonder that puts the “wonder” in Wonder Bread has not gone stale. First out of the oven in Indianapolis on May 21, 1921, the beloved white fluff encased in soft crusts has been festooned with balloons of blue, red, and yellow from the beginning. During the Great Depression, it was one of the first brands to start coming pre-sliced. And as journalist Shax Riegler discovered, it was even featured in the futuristic Food Zone of the 1939 World’s Fair (along with a jewel-studded-avocado diorama and a nifty rotating platform that milked fifty cows in a matter of minutes).

But as every jealous (jelly?) loaf of brown bread can tell you, the nutritional value of white bread pales in comparison. In response to widespread nutrition-deficiency diseases during the privations of World War II, the bleached flour in Wonder and other brands of white bread started coming fortified with lots of real good stuff. Vitamins! Minerals! Many other kid-friendly foods at the sugar party were also enriched, like Hawaiian Punch (which began as an ice cream syrup). But added nutrients in cheap foods worked, helping to wipe out diseases like beriberi and pellagra.

After the war, as suburbia spread and families got bigger, kids became a profitable market for brands that could use TV commercials and sponsorships to capture their budding imaginations. Between 1950 and 1964, ads touted Wonder Bread’s nutrition: It “helps build strong bodies 12 ways.” By the late 1960s, standbys like Hawaiian Punch, Hi-C, and even Hostess Snack Cakes would emphasize their fortified nutritional prowess, despite their atomic-level sugar content. Vitamins! Minerals!

Enter the complaint-filing, sugar-party-spoiling Federal Trade Commission, which regulates advertising and works closely with the Food and Drug Administration, which regulates food. In 1971 the FTC went after ITT Continental Baking, the maker of Wonder Bread and Hostess Snacks, for deceptive and unfair advertising. It argued that you couldn’t tell little kids, who naturally wanted to be strong, that Wonder Bread would help them do just that, when, according to the FDA, its ingredients were no different from other brands on the market. (The ads were also deceptive to mothers of young children, said the FTC.)

According to a contemporaneous analysis in the Michigan Law Review, the FTC proposed “corrective advertising,” which required the company to go hat in hand to consumers, admitting its wrongs. ITT Continental did just that, but the case wasn’t over. On appeal, the Second Circuit amended part of the FTC’s order, insulating advertising agencies from liability where they could show they did not know or have reason to know of the doughy misrepresentations. That wasn’t the last time the commission would tangle with the makers of Wonder Bread. In the 2000s they had to stop advertising that the bread’s added calcium benefited the brains of growing kids.

You might say the wonder years were through, but you can still buy the stuff. After a brief year when its parent company (Hostess) went out of business, it’s back on the shelves.