These collective rituals of death brought meaning and identity to urban, working-class youth. 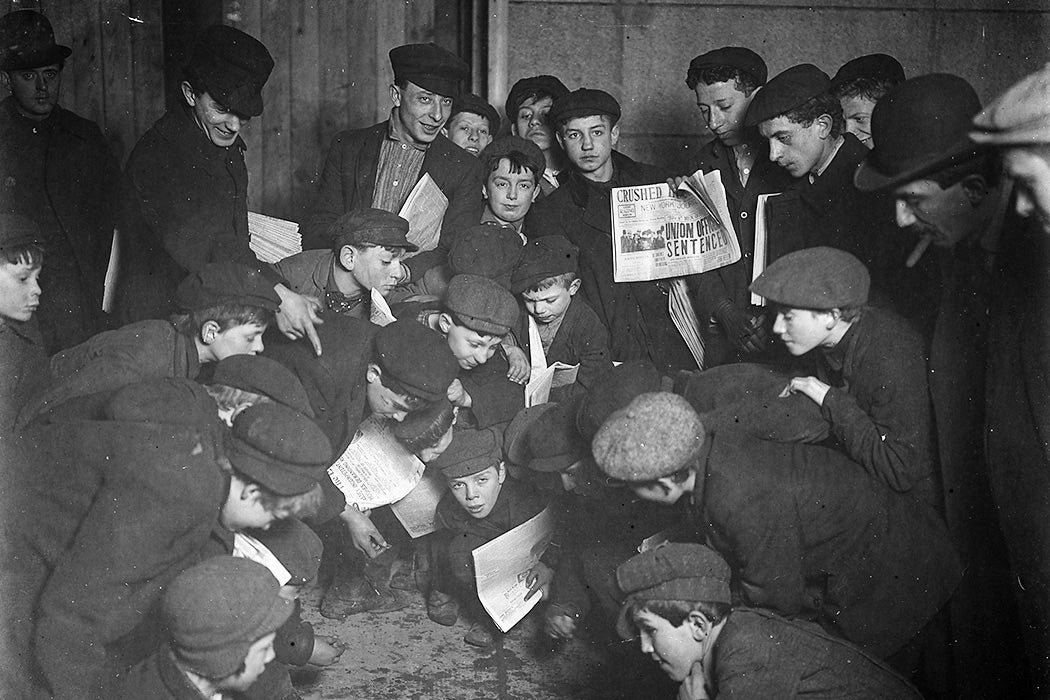 Skinney, Mikety, Johnny Morrow, and Aaron “The Slave” Charity. Didley Dumps, Young Waffles, and Whistlin’ Jo Rathburn. These were the newsboys memorialized by their fellow sellers-of-newspapers in big cities during the second half of the nineteenth century, their names—sometimes only their nicknames—remembered by their competitors and friends. Fearing the ignominy and loneliness of a Potter’s Field burial more than death itself, newsboys saw to it that their own received respectful exits, with all the trappings they could afford.

“Dozens of orphan and homeless newsboys in Boston, New York, Brooklyn, Philadelphia, Louisville, St. Louis, Chicago and other cities were publicly laid to rest by their peers and the institutions that ministered to them,” writes scholar Vincent DiGirolamo. “In addition to flowers, newsboys took up collections for coffins, plots, and gravestones. They hired hearses, undertakers, and ministers. They drafted letters of sympathy, passed resolutions of condolences, and marched in funeral trains through the same streets in which they sold their papers.”

Newsboy funerals were not just expressions of class solidarity but also of collective emotion, a youthful participation in the era’s “sentimental cult of mourning.”

DiGirolamo explores these newsboy funerals, which he calls “one of the more obscure rituals of childhood.” Perhaps obscure today, but between 1850 and 1910, they were events. He argues that they were not just expressions of class solidarity but also of collective emotion, a youthful participation in the era’s “sentimental cult of mourning.”

On the edge of cutting-edge media, newsboys’ funerals also became the “subject of tracts, sermons, poems, memoirs, illustrations, and not a few Tin Pan Alley tearjerkers.” The song “The Little Newsboy’s Death,” about Johnny Vantanno, a Chicago newsboy run over by a cable car, was one of the latter. “Twas little Johnny, weak in frame/But mighty in a loving heart” celebrated in pathos-ridden lyrics.

Journalists, editors, and publishers sometimes pitched in with funding for a funeral. The newspapers might also give the distinctive tribute of an obituary, something most big city dailies only did for the most prominent of citizens. Johnny Morrow’s 1861 death was written up by three New York City papers and one Brooklyn (then a separate city) paper. Morrow, dead at 17, had reached prominence with a published autobiography, A Voice from the Newsboys.

Another exception: city morgues allowed viewings of the body, something rarely done with other dead. This was, after all, still a time when most people died and were prepared for burial at home, not in separate facilities, later notably called “funeral homes.”

DiGirolamo explains that newsboys typically ranged in age from six to fifteen. One of his contemporary sources cites a four-year-old, just starting out in the business. Fifteen was the usual age working-class children moved on to join the adult workforce. There were thousands of these kids selling papers in the late nineteenth century, when big cities saw multiple daily newspapers feverishly competing for readers. Most were boys, a few girls.

The majority were neither orphans nor homeless, but rather the youngest members of poor and immigrant families desperate for a little more income. DiGirolamo reviews the era’s grim statistics of child mortality, noting that the biggest killers of children were infectious diseases like diphtheria, tuberculosis, pneumonia, typhoid, and measles. Getting through childhood was no guarantee of a long life: in 1900, the average life expectancy in the US was 46 years for men and 48 years for women. “Poverty killed, and urban poverty killed the most.”

Pint-sized paupers they may have been, but collectively they worked hard to avoid a pauper’s burial.

“A hero’s funeral, however humble, allowed newsboys to assert their collective and individual identities. It was their way of saying that they were not just street rats and guttersnipes, but human beings; not just vagrants and beggars but members of a trade, and not just anonymous hawkers, but individuals who had names.”