As the power of the East India Company grew, British writers embraced the idea that the (alleged) passiveness of Indians was due in part to vegetarianism. Take a vegetarian and an outspoken fan of meat. Which will be a feminist? Which will decry white supremacy and imperialism? To most Americans today, the answers may seem obvious. But why? As English scholar Marguerite M. Regan writes, the idea of vegetarianism as we know it, and its political connotations, took shape in Britain in relationship to the Empire’s role in India.

In the century following the founding of the East India Company in 1600, Regan writes, the British public became increasingly interested in the culture of the subcontinent, including its food. In 1689, John Ovington, a chaplain for the East India Company, claimed that avoiding meat made Indians “innocent, obsequious, humble, and patient to a miracle,” as well as more spiritually attuned, in contrast to “rough” and “hot-tempered” English military men. He saw both benefits and downsides to vegetarianism, claiming that meat-eating protected the English from disease but also made them “much less vigorous and athletic in their bodies than the Indians.”

British writers increasingly embraced the idea that Indians were essentially passive, effeminate, and inept at fighting due in part to their diet.

Likewise, in 1683, English sugar merchant Thomas Tryon praised Brahmins’ unwillingness to make their bodies the “grave of inferior creatures,” but also argued that their spiritual advancement made them unconcerned about political matters. In fact, he suggested, Brahmins would welcome foreign occupation as a relief from mundane responsibilities like enforcing the law.

As the power of the East India Company grew in the eighteenth century, British writers increasingly embraced the idea that Indians were essentially passive, effeminate, and inept at fighting due in part to their diet. To many of them, this clearly meant they were naturally fit to be subjugated by a stronger, meat-eating people. But some, particularly women writers, turned this idea on its head, portraying vegetarianism as part of a more civilized and egalitarian, less macho worldview.

In the 1789 novel Hartly House, Calcutta by Phebe Gibbes, an Englishwoman living in India finds the local people to be “the most tranquil and temperate people on earth.” She falls in love with a Brahmin man and converts to Hinduism partly on the basis of its nonviolence and kindness toward animals. Eliza Hamilton’s 1796 Letters of a Hindoo Raja—a novel written in the form of a fictional collection of letters—conveys support for the British colonial project in parts. But it also features Hindu characters expressing horror at what they perceive as barbarous mistreatment of animals by the British. Ultimately, Hamilton expresses hope for a socialistic, democratic, egalitarian society.

Similarly, Scottish philosopher and writer John Oswald tied Hindu-inspired vegetarianism with egalitarian politics. After arriving in Bombay as a British army officer in 1782 and witnessing rapes and massacres committed by the British, he left the army, was taken in by members of the Brahmin varna/caste, and stopped eating meat. Later, as a supporter of the French Revolution, he tied animal rights to equal treatment for humans across lines of class and race. Like other Hindu-influenced British thinkers of his time, Regan writes, he imagined a “widening circle of benevolence in which women, animals, and colonial subjects were embraced.” 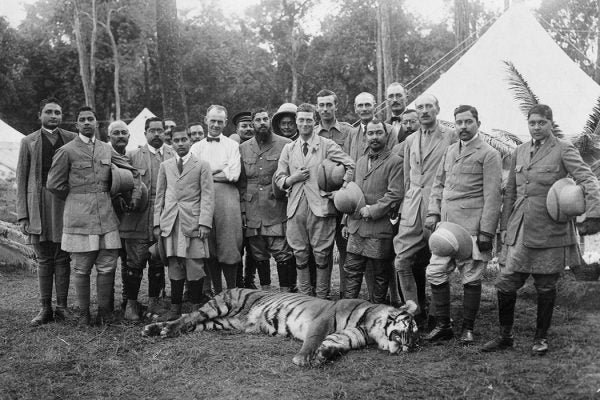 Prince Edward's visit began the end of the monarchy’s influence in India.