Fighting Over the Dead

There was more than one violent altercation at the cemetery when one side of the family wanted to move a dead relative, and the other didn’t. 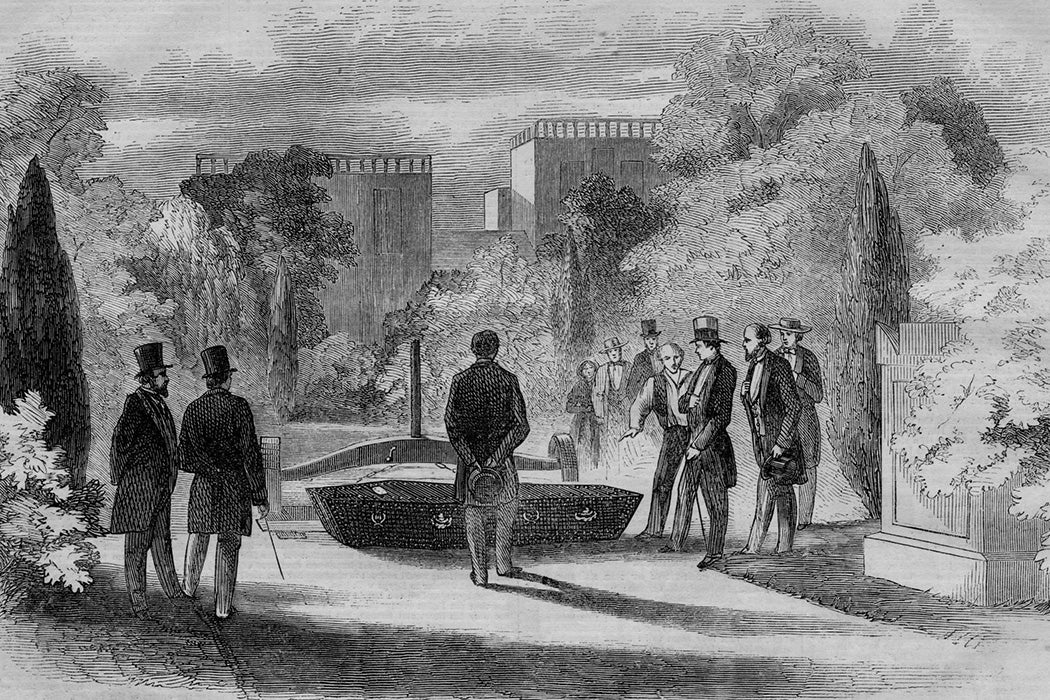 During the nineteenth century, the distance between the living and the dead in America steadily increased. Hospitals and physicians, boards of health, cemetery proprietors and funeral directors: all worked to remove the dead from the intimacy of the home. “Authorities both public and private began to displace family and community as caretakers of the dead,” writes scholar Elizabeth Searcy in her exploration of “custody battles” over human remains.

“Private control over the dead was ceded to experts and interactions with moral remains grew increasingly rare. The formerly intimate relationship between living family and lost loved ones became more remote, if also more sentimental. Death and its aftermath gradually disappeared from sight.”

Even in the late nineteenth century, “families retained powerful emotional attachments to the physical remains of departed loved ones…”

By the turn of the twentieth century, the American way of death, the one under which we still operate, was more or less established. It was bureaucratized and professionalized. Dying in the home, once so typical, became unusual, and having family, friends, and neighbors prepare the corpse for burial became almost unheard of.

But this transformation in burial attitudes didn’t happen overnight. Even in the late nineteenth century, “families retained powerful emotional attachments to the physical remains of departed loved ones…” Bodies weren’t always easily or completely surrendered, even after they were buried. As Searcy describes, “Court battles over disinterment at the turn of the century indicated that families retained a vigilant sense of proprietorship over their loved ones’ remains even years after an initial interment.”

Into the 1890s, there were cases in which family members demanded, and often received from sympathetic courts, disinterment and reburial rights. Searcy notes that “widows in particular” featured prominently in these disputes, “suggesting that women may have been reluctant to surrender their customary guardianship over the dead to a new class of male professional.” Though institutional authority “erected barriers between the living and dead, a powerful desire to control and possess the bodily forms of departed loved ones remained a prominent reaction to death in nineteenth-century America.”

White Protestants in the Northeast had no tradition of disinterment before the 1800s. But as the century progressed, burial grounds, especially in crowded cities, were commonly disinterred by municipal authorities for sanitary reasons. Famous Americans were also regular disinterred and reburied, often with more ceremony than had been at original burial.

But it wasn’t only the famous. As an example, Searcy points to Swan Point Cemetery, then a rural cemetery northwest of Providence, Rhode Island. In 1881, reburials (from other cemeteries as well as within Swan Point’s own grounds) accounted for a quarter of all burials in the cemetery that year. A speaker at the Association of American Cemetery Superintendents meeting in 1893 complained that moving corpses from burial site to burial site was “a craze” that he hoped to see the end of soon.

“The identity of the deceased persisted decades after interment, as did emotional attachment to the physical bodies of lost loved ones. Indeed, these cases resembled nothing so much as custody battles over living relatives, conveying a sense of death and decay as altering, but not extinguishing, personal relationships between surviving and departed kin.”

Resorting to law, of course, had an effect on some legal definitions. Before the American Civil War, “bodies had no precise legal character: being neither people nor property, they had neither rights nor owners.” By the 1870s, however, legal precedent considered bodies as “quasi property,” giving families greater discretion over the disposition of remains. But families, being families, still feuded over the remains. There was more than one violent altercation at a cemetery when one side of the family wanted to move the body, and the other didn’t. Caskets were damaged, tombstones defaced, participants bloodied. Perhaps unsurprisingly, courts could also insist that relatives didn’t have absolute rights to bodies.

“The dead could be a source of comfort, a symbol of familial harmony, an uplifting influence, or an emotional weapon. In essence, the dead were whatever the living wanted or needed them to be.”

The Dead Belong to the Living: Disinterment and Custody of Dead Bodies in Nineteenth-Century America
By: Elizabeth Searcy
Journal of Social History, Vol. 48, No. 1 (Fall 2014), pp. 112–134
Oxford University Press