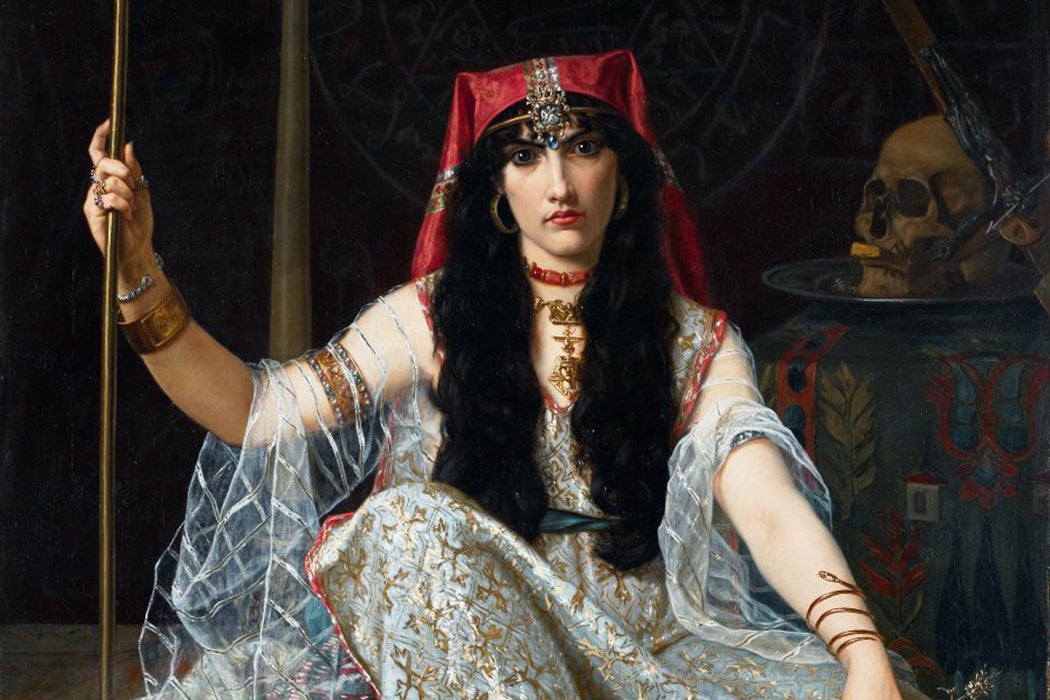 They have become a common sight wherever feminists gather, the symbols of the occult. Whether it’s a “We Are the Granddaughters of the Witches You Couldn’t Burn” t-shirt, a tarot deck with trans-focused imagery, or a conversation about hexing the patriarchy, young women’s pursuit of equal rights and fair treatment is intimately tied up with the rise and spread of witchcraft as a spiritual and religious practice.

It is easy to dismiss most contemporary witches. The modern expressions of witchcraft seem primarily about consumption and Instagram—posting pictures of your latest ritual with the $120 rare crystal next to the designer tarot deck and the trendiest succulent plant that was illegally smuggled in from South Africa—but the histories of witchcraft and feminism, indeed occult spiritual practices and political revolutionaries in general, are closely connected.

The history of feminism tends to be written as a secular movement, one indifferent at best to the spiritual side of life, if not actively hostile. And while that might be true of some individual figures, most of feminist history has emerged from—and alongside—esoteric developments like Spiritualism, Theosophy, and Paganism. This history is mostly the result of the fact that the development of a feminist consciousness required the interrogation and breaking free from monotheistic Abrahamic religions, which used religious doctrines to justify the political and cultural subjugation of women.

Within Christianity, the story of Eve and the introduction of sin was used to justify everything from forbidding women to be educated to denying pain relief during childbirth, as that pain was supposedly created by God as a punishment for women’s transgressions. Early women activists found it wasn’t effective enough to argue that women should be allowed to go to school or, my god, get some help surviving childbirth (during the second wave of the Black Plague, more women died from giving birth than from the plague itself). They found it was more effective politically to attack directly the source of their oppression: religious authoritarianism.

When women like Woodhull and other feminists were taunted as witches, as Satanists, as demonic, they embraced these labels with pride.

It wasn’t just that suffragette Victoria Woodhull was branded a witch by the misogynistic press, depicted in a political cartoon as Mrs. Satan in Harper’s Weekly in 1872. She was also literally talking to the dead and participating in Spiritualist rituals. Often denied any position of real power in a Christian church, women instead found themselves able to lead services in more fringe sects, which had the added bonus of not being burdened with centuries of misogynistic thinking and texts. The emergence of Theosophy, and the influence of its leader Madame Helena Blavatsky, gave women alternatives to thinking about their place in the hierarchy. Unburdened from the sins of Eve, women like Woodhull argued against women’s involuntary domesticity in the heteronormative family and instead advocated for free love, the rights of sex workers, and reproductive freedom.

When women like Woodhull and other feminists were taunted as witches, as Satanists, as demonic, they embraced these labels with pride, according to the anthropologist Kathryn Rountree. An early socialist American magazine based in Kansas that argued for women’s liberation took the title Lucifer: The Light Bearer. So yes, they were on the side of the devil here: Eve was a hero bringing enlightenment, the serpent was a truth teller, and together they fought against an authoritarian and punishing god. As the historian of religion Per Faxneld has documented, this was a shared experience with many freedom fighters, as various socialists and revolutionaries also embraced the figure of Satan as the ultimate symbol of rebellion and liberation. This push helped re-establish a hard line between church and state, dismantled arguments against allowing women freedom to participate in public life whether through career, politics, or education, and disempowered and marginalized Christian orthodoxy from western culture.

This work was so effective, in fact, contemporary feminists find it difficult, if not often impossible, to reconcile their political beliefs with Christian doctrine, as the historian of religion Ann Braude has noted. After decades of waging the war against orthodoxy and fighting for separation between church and state, many women find themselves alienated from the church. That hostility was shared, as Christians published many screeds warning against the dangers of feminism, railed from the pulpits against women not knowing their place, and fought against allowing women to take positions of power within the church. Younger women came of age watching religious groups fight against their right to reproductive autonomy, and, still feeling a need for religious tradition in their lives, have looked for alternatives.

As the sociologists Helen A. Berger and Douglas Ezzy suggest, much of the contemporary resurgence in interest in witchcraft comes from pop culture. While young witches might claim to have been introduced to witchcraft through other practitioners, through research, or through spiritual questing, for the most part, it’s been television shows like Buffy the Vampire Slayer and films like The Craft—both feature young, attractive young women being introduced to the dark arts—that have been the most influential in sparking interest. (Which also lines up with how feminism as a whole became mainstream: young feminists might claim it was an important text by Andrea Dworkin or bell hooks that brought about their political conversion, but, often enough, it can actually be traced back to watching Beyoncé perform in a tight outfit in front of the word FEMINISM on television.)

Witchcraft claims a long, hidden tradition, surviving through the generations through secret transmission by devoted followers. In reality, however, much of what we understand to be contemporary paganism and witchcraft was wholly invented in the 1960s, during the New Age movement. Many of those early practitioners claimed to be pulling from ancient sources, but, for occultists and magicians, that claim is as reliable—“oh yeah, I totally pulled this from an ancient Egyptian parchment, I in no way just invented this out of boredom”—as their claim that saying the right words in the right order can create a material change in the world.

But the invented origins of witchcraft and paganism don’t diminish their power and influence. We have moved on from the Spiritualist craze, no longer really believing we can directly communicate with the dead or that the dead might have anything truly interesting to say, but that doesn’t change the huge impact Spiritualism had on American politics and culture, even if that impact has often been dismissed or ignored in the histories of feminism. But these new spiritual stories, about women wielding power and possessing the ability to change the world, cannot so easily be separated out from their political and culture context.

Share Tweet Email Print
Have a correction or comment about this article?
Please contact us.
feminismwitchcraftJournal for the Scientific Study of ReligionNumenSocial Analysis: The International Journal of AnthropologyThe Journal of ReligionThe Sex Radicals: Free Love in High Victorian AmericaThe SpiritualistWomen and politics

Women and politics.
By: Charles Kingsley
Women and politics, Women and politics., (Jan., 1870), pp. 1-16
Collection: Cowen Tracts, 19th Century British Pamphlets
The Spiritualist
The Spiritualist, No.207, August 11th 1876
W. H. Harrison
THE POLITICS OF THE GODDESS: Feminist Spirituality and the Essentialism Debate
By: Kathryn Rountree
Social Analysis: The International Journal of Anthropology, Vol. 43, No. 2, BACKWATERS RUN DEEP: Locating New Zealand Social Anthropology (July 1999), pp. 138-165
Berghahn Books
Lucifer, the Light Bearer
By: Hal D. Sears
The Sex Radicals: Free Love in High Victorian America, Chapter 4
University Press of Kansas
The Devil is Red: Socialist Satanism in the Nineteenth Century
By: Per Faxneld
Numen, Vol. 60, No. 5/6 (2013), pp. 528-558
Brill
A Religious Feminist—Who Can Find Her? Historiographical Challenges from the National Organization for Women
By: Ann Braude
The Journal of Religion, Vol. 84, No. 4 (October 2004), pp. 555-572
The University of Chicago Press
Mass Media and Religious Identity: A Case Study of Young Witches
By: Helen A. Berger and Douglas Ezzy
Journal for the Scientific Study of Religion, Vol. 48, No. 3 (Sep., 2009), pp. 501-514
Wiley on behalf of Society for the Scientific Study of Religion