The Promise of Sewage 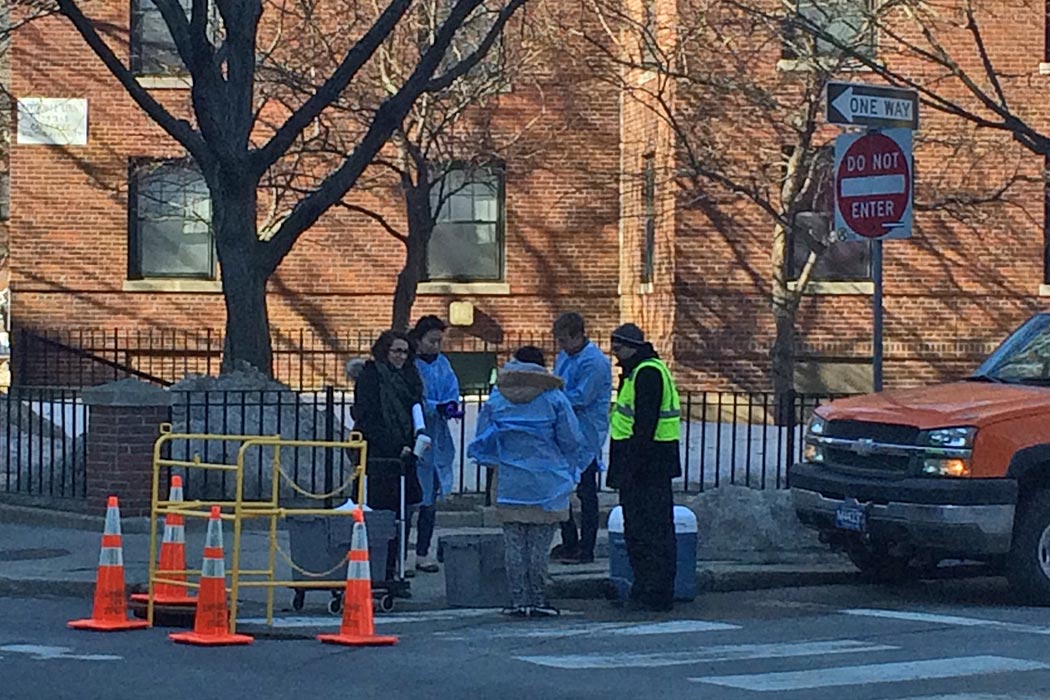 I was sleeting at 10:40 p.m. on April 8, 2015 ­when the fire alarm went off in Eric Alm’s microbiology laboratory in Cambridge, Massachusetts, where Mariana Matus-Garcia and 31 other researchers had been collecting and processing sewage for the past 12 hours. Despite the disruption, Matus-Garcia —a graduate student in the Massachusetts Institute of Technology’s computational and systems biology program—swiftly put on her rain jacket, grabbed a cooler filled with ice, and went down to the open manhole at the intersection of Portland and Washington streets, which was surrounded by a Cambridge public works officer and a small team of researchers. Matus-Garcia and the other members of the lab were huddled under a white tent to collect the next sewage sample, which was scheduled for 11 p.m. sharp. The team still needed to collect 12 additional samples to complete a 24-hour study exploring how daily human activity is reflected in sewage. But when she switched on the pump, no liquid from the bowels of the city came through.

Undeterred by the fire trucks and police cars rushing to the source of the fire alarm, Matus-Garcia and Yaniv Turgeman, an architect and one of the project leads, slowly pulled a clear, 25-five-foot-long tube out of the manhole to see what was wrong. On the other end, Matus-Garcia found that the filter—a small mesh cover resembling the mouth of a microphone—was wrapped in toilet paper. She recoiled slightly in disgust but smiled after removing the source of the obstruction with her purple nitrile gloves. She was just grateful the pump wasn’t broken and the experiment could continue.

Matus-Garcia’s daylong experiment marked the beginning of a larger project called Underworlds, a collaboration between scientists in the Alm Lab, MIT’s Senseable City Lab, and four other MIT labs, which studies how digital technologies can impact the way people live in urban spaces. The goal of the project is to create sensors placed in sewers that can detect disease transmission in real time—something we can’t currently do—by looking at the microbial composition of sewage.

First, however, the Underworlds team needs to make sense of what information it can extract from the sewage and when. This is why the members have frontloaded themselves with a labor-intensive experiment: a 24-hour time course to determine the best point in a day to fish information out of sewage.

“We’re interested in the profile of bacteria that different communities harbor,” says Matus-Garcia, a research lead on the project. “Most studies of sewage have been done at treatment plants, but we want to look upstream before the spatial information associated with a sample is lost.”

“Almost all of our human activities leave a trace in the water,” says Alm, microbiologist and principal investigator of the Underworlds project. “For the enormous quantities of clean water piped into the city each day, an equal amount of dirty sewage is piped out. There’s an enormous richness of information to be gained by looking in the water that’s indicative of what’s going on in a city in a real-time fashion. We want to tap into that source of information and develop it into an information platform.” In the past few decades, researchers have already found that viruses detected in sewage could correlate with the presence of disease in a community, and that antibiotic-resistant bugs—which pose major public concerns—can be found in wastewater-treatment plants.

It has been well-known for more than a century that sewage is teeming with all sorts of microbial life that can cause illness. In 1854, epidemiologist John Snow constructed a map of London’s Soho after the cholera outbreak in the neighborhood. At the time, the public believed diseases like cholera and bubonic plague to be transmitted by air. Snow was intensely skeptical of the idea that diseases were transmitted by “bad air.” When the outbreak occurred, he spoke with local residents and realized that each individual case occurred close to local water mains. After collecting data, family by family, he was able to ultimately generate a map of the city. In a letter to The British Medical Journal in 1857, he wrote:

I called myself at every house from which a cholera death had been registered, in the first seven weeks of the epidemic of 1854, in all the districts in which the supply of the two Water Companies in question was intermixed; and, if the illness had not commenced in the house in which the death took place, I then sought the real place of attack, and in either case I ascertained the water supply of the house. I did not rest satisfied with a mere verbal reply; but obtained, in all cases, such corroborative evidence as could leave no doubt on the point, and I have the notes of my results.

Ultimately, Snow decided that cholera was being spread by contamination in the sewers. His work demonstrates a key epidemiological principle: The most important information to have on any communicable disease is its route of transmission.

In essence, the Underworlds team wants to do what Snow did for cholera with one major difference: It wants to “map” the microbiome of a city so that communities can be proactive—instead of reactive—to the spread of disease.

With antibiotic resistance on the rise and the unpredictability of transmission of viruses such as [COVID-19], Ebola, SARS, and MERS, it’s imperative public health officials, hospitals, and community members have the tools to track the spread of these pathogens. Recent advances in technologies such as DNA sequencing and robots will aid the team to reach its goal of implementing methods first in Kuwait City and Cambridge, before moving on to other cities.

Outside of Cambridge, other efforts in understanding the microbial composition of where we live are also well underway. Jane Carlton, a geneticist at New York University, is studying the microbial communities present in New York City’s sewage. Carlton’s project also seeks to understand which microbes—the good, the bad, and the somewhat ugly—are present in the belly of the city that never sleeps. Computational biologist Christopher Mason at Weill Cornell Medical College in New York City, examined the microbes commuters encounter on the city’s subway. Research is also being done in hospitals to understand and track the transmission of disease within clinics.

“To get to the vision of real-time epidemiology through the sewage, we have to get our hands dirty in fundamental questions.”
Yaniv Turgeman

When the Underworlds team collected the last sample on Thursday, April 9, at 10 a.m., it celebrated—as one does—by posting a selfie to Facebook. Currently, all 24 sewage samples collected by the team have been processed and separated into different tubes, one each to study the bacterial, viral, and metabolite composition at each time point. In the upcoming months, it will run several assays to determine what signals it finds at each time point. Turgeman explains:

There is a lot of good science that can be done along the way, but the big goal is to contribute actionable insights to public health. To get to the vision of real-time epidemiology through the sewage, we have to get our hands dirty in fundamental questions. What part of the upstream population does an arbitrary liter of sewage represent? Was the detection of a pathogen contributed to by a strong signal in a few people or a weak signal in many? How often and where should samples be taken to best understand a condition and improve health outcomes?

Moving forward, the Underworlds team will determine the best time to sample before looking at another 10 locations in Cambridge. Expanding the geographic range of where sewage is taken from will provide the team with additional information about the behaviors of any given community.

Later in the year, the team hopes to implement some of its platforms in Kuwait City, says Newsha Ghaeli, a project lead for Underworlds. Kuwait already has sensors that monitor flow and water levels built into its sewers. “We are working to get a sense of what kind of data they can obtain from their sensors and how we can utilize that data to build out our platform there,” says Ghaeli. “While we’d like to track diseases like influenza here in Cambridge, the folks over in Kuwait are more interested in enteric and diarrheal diseases.”

The team is also looking to develop a robot to collect samples, which would override the need to manually pump sewage out of a manhole at 2 a.m. and save an hour of processing in the lab.

“At the end of the day, sewage is definitely something you want to keep down there,” says Matus-Garcia. “And because of that, people have this ‘out of sight, out of mind’ mentality toward it. But the better we understand what’s in sewage, the better we can work with it moving forward.” 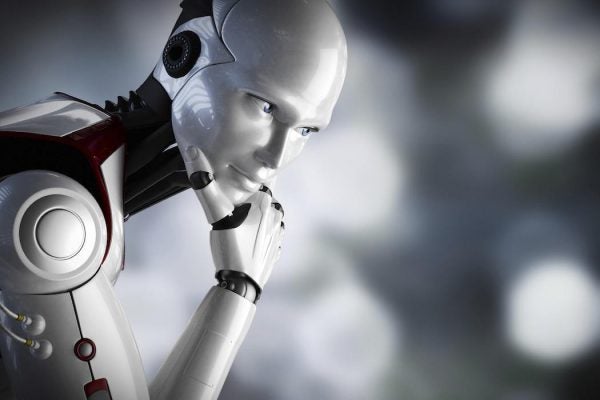 How Synthetic Brains Can Advance Robotics

Why try to create synthetic brains? Given the anxieties around artificial intelligence, why risk it?