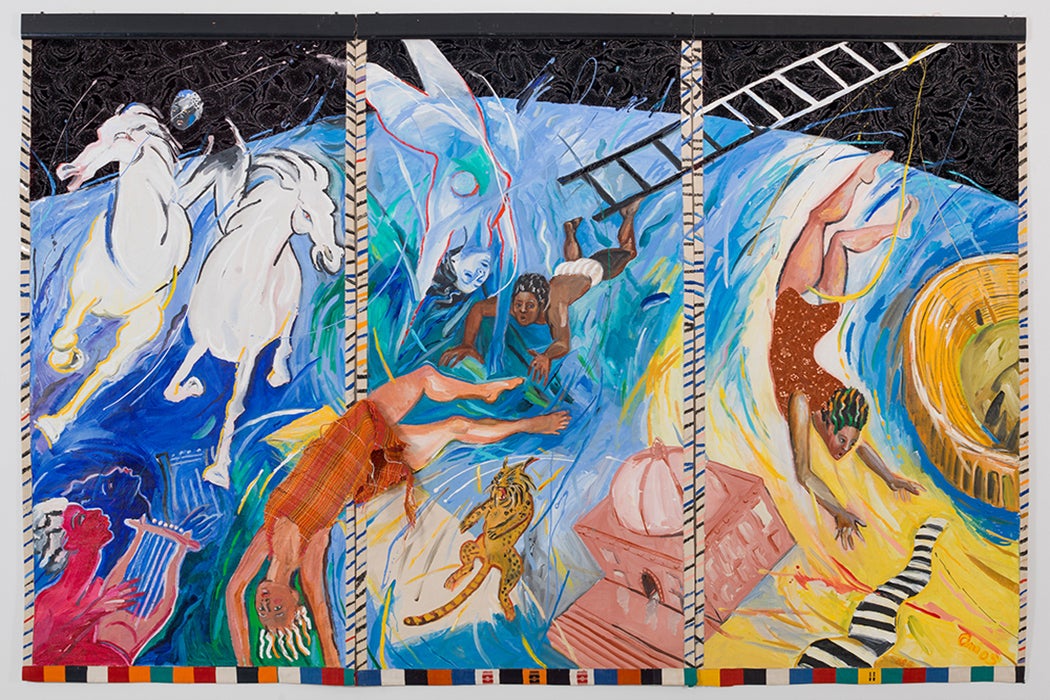 How does an African-American, Southern, female artist make a place for herself at the table? Postmodernist painter and printmaker Emma Amos has consistently worked to answer this question in her work, which contains layers of references to historical figures as well as her family legacy. In the article “Emma Amos: Art as Legacy,” Lisa E. Farrington considers this practice to be an example of the psychological phenomenon known as the Family Romance.

Farrington defines the Family Romance, in the context of art, as artists being identified as conceptual descendants of previous artists. This genealogical understanding of art history is borrowed from the Freudian principle of the same name. Freud asserted that people unconsciously elevate their parents to the level of deities or royals. It logically follows that people then consider themselves heirs to their parents’ elevated status. Artists relate to their predecessors in a similar way: elevating and emulating their inspirations. Emma Amos draws connections between the subjects of her art while tying them into her own personal narrative.

Amos situates her biological family in a Family Romance and creates space for herself in the art historical canon.

As a Southern, African-American woman artist, Amos creates kinship with others who share aspects of her identity. In her work A Reading at Bessie Smith’s Grave (1985) Amos not only connects her art to that of the musician Smith, but to several other famous African Americans. The work is a collage of multiple portraits on Sekishu rice paper. One piece is a group portrait of Langston Hughes, Countee Cullen, W. E. B. Du Bois, and Paul Robeson (depicted at two different ages). They are joined by a golden portrait of Zora Neale Hurston and a blue-tinted portrait of Joe Louis. In the center of these figures is Miles Green Amos, the artist’s father.

By displaying her own father with legendary African-Americans, Amos insists that her lineage is just as important. It is her birthright to stand among these figures. Amos’ choice of people is also meaningful. While living in New York City, Amos faced anti-Southern discrimination. Though the Atlanta-born artist began taking college level art courses at age 11, her accent marked her as uneducated in the eyes of her Northern peers. A Reading at Bessie Smith’s Grave declares Southerners Smith, Hurston, Louis, and Amos as equals to the Northern figures.

Amos’ use of the Family Romance includes her aspirations for the future. Her project The Gift (1990-1994) is a series of portraits of influential women. Amos began this project as a gift for her daughter’s twentieth birthday. The paintings include artists, writers, and historians of all races. Some of these women are personal friends of Amos. Notably, the artist includes her own daughter in the series. By venerating her child among significant women Amos is solidifying her own legacy into the next generation.

Not only does Amos situate her biological family in a Family Romance, she creates space for herself in the art historical canon. The mixed media piece Muse Picasso (1997) draws a through-line from various African tribes, to the titular Spanish artist, to Amos herself. Amos is well-trained in textiles and spent years working as a weaver. In an effort to erase the distinction between art and craft she incorporated fabric from all over the world into her art. Muse Picasso is an apron made of traditional fabric such as Bakuba and Kente cloth. At the top of the apron is an image of a group of herdsmen with their bulls. In the center is a portrait of Pablo Picasso. Circling him are images of African masks, a portrait of Amos, and part of Picasso’s painting Les Demoiselles d’Avignon (1907). The latter work is itself based on masks made by the Pende tribe. The names of African tribes are written on the apron in addition to words such as “inspiration,” “master,” and “seminal.” Picasso is known as a father of modern art, yet Amos’ piece challenges the viewer to question who is the inspiration and who is the inspired. By interrogating the legitimacy of Picasso’s place in the art historical genealogy, Amos makes room for her own artwork. 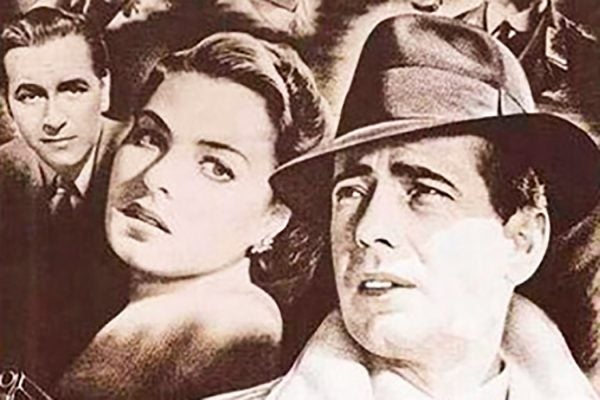 On the 75th anniversary of the premier of Casablanca, let's revisit the art and politics of this venerable American classic.