Dogs have long played a big role in the White House. 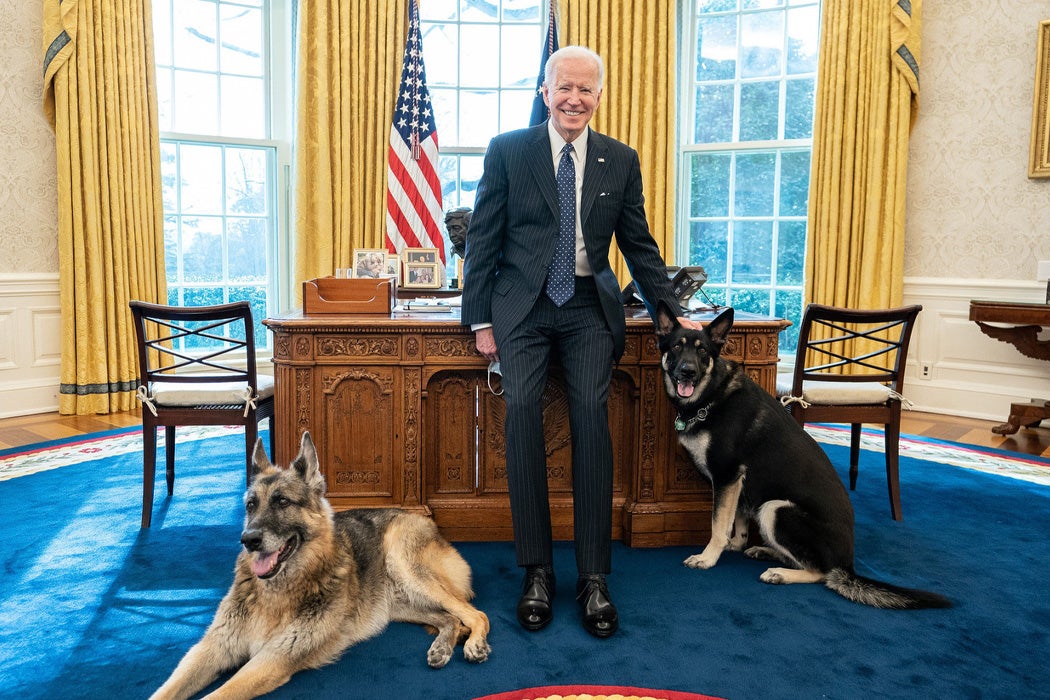 When President Joe Biden’s term began in January, the arrival of German shepherds Champ and Major marked the return of animals to the White House. A cat is expected to join them. Most American presidents have owned pets—mainly dogs, though President Calvin Coolidge notably had a beloved pet raccoon, Rebecca, in addition to his white collie, Rob Roy.

Trump was the first president not to own a dog in 115 years, since President McKinley (who instead kept a parrot, roosters, and kittens). While a president’s pet ownership might seem like a frivolous detail, throughout history, animals have often served both commanders-in-chief—and presidential hopefuls—as powerful political tools.

“The political dogs for the ages are not necessarily the most loved, but the ones that have been used most effectively as makers of points or diffusers of scandal.”

As Amy Davidson Sorkin wrote in a piece for The New Yorker, after Mitt Romney’s dog-on-the-roof disgrace resurfaced during the 2012 presidential election: “The political dogs for the ages are not necessarily the most loved, but the ones that have been used most effectively as makers of points or diffusers of scandal.”

A 2012 study by Forrest Maltzman, James H. Lebovic, Elizabeth N. Saunders, and Emma Furth, published in PS: Political Science and Politic, looked at when presidents’ dogs were most likely to make strategic public appearances. Analyzing mentions of presidential pups that appeared in the Washington Post and the New York Times between January 1961 and January 2011 (the Kennedy through Obama administrations), these political scientists found that administrations were more likely to trot out their pets for during times of war and scandal. They were less likely to bring their pets out during tough economic times, when “their frolicking on the White House lawn in hard times might cue the public that not everyone in the country is suffering equally and that being president is not a full-time job.”

Building on the theory of diversionary war, which argues that presidents will enter a conflict in order to distract from domestic issues, this paper argues:

Evidence abounds that presidential pets are an integral part of White House political strategy… In times of war, they tell the country that they and the rest of the nation are in good hands. In times of personal scandal, they convince us that the president is “only human.”

One of the most influential examples of a president using a pet to project a steady and reassuring image to citizens during wartime (and to help mobilize them) is FDR and his Scottish terrier, Fala. A gift from his cousin, named after a distant Scottish ancestor, Fala came to live at the White House after Roosevelt’s election to a third term, in 1940. The little dog was such a constant companion to Roosevelt that he was cast in bronze beside FDR at the president’s memorial in Washington.

As rhetoric scholar Bryan Bankfield writes for Rhetoric and Public Affairs, FDR’s presidency marked a shift in how Americans related to their president, in large part thanks to the compassionate image projected by Roosevelt and Fala’s relationship. In 1941, Fala tried to ride along with FDR in the motorcade to his third inauguration. Press photos of the president telling the dog that he’d have to stay home became some of the first publicly available images of the commander-in-chief and his furry friend. The tenderness and relatability of the images inspired a surge in letters to the president from dog-owning citizens. As Bankfield puts it, “the Scottie’s presence opened apolitical discursive avenues for citizens to communicate with their president.”

The administration capitalized on public affection for Fala during World War II, to encourage other dog owners to get involved in war efforts. In 1942, the White House announced Fala had contributed to the rubber drive by donating his rubber chew toys. He also participated in a bond drive for Dogs for Defense, a program that recruited and trained citizens’ dogs for the war effort. Fala was also kept in the public eye through a deluge of media coverage, including two MGM short films—which, Bankfield calls, “among the most intricate and self-proclaimed attempts at showing citizens that the world war had not disrupted daily life in the White House”—and a children’s book.

FDR’s most significant use of Fala as a political prop was during a 1944 campaign address to the International Brotherhood of Teamsters. During the speech, Roosevelt ridiculed Republicans for spreading a rumor that he had left Fala in the Aleutian Islands, and sent a taxpayer-funded destroyer ship to collect him. “I don’t resent attacks, and my family doesn’t resent attacks, but Fala does resent them,” Roosevelt told the crowd. The “Fala Speech,” as it became known, was such a hit that Eleanor Roosevelt later credited it with laying the groundwork for FDR’s unprecedented election to a fourth term.

Eight years later, the success of that speech inspired then-vice presidential candidate Richard Nixon’s famous Checkers Speech, in which he addressed accusations that he had a secret trust fund through which campaign donors covered his personal expenses. While he denied the accusations, he strategically confessed to one political gift that hadn’t been reported: a cocker spaniel, Checkers, beloved by his young daughters that he refused to give up. Nixon’s discussion of the family dog and his children demonstrated his understanding of the power of television to help him directly connect with the American public, and in closing the speech with this public affection for man’s best friend, successfully appealed to their sentimentality.

And, as Maltzman and company point out, the day after President Bill Clinton admitted to having an affair with Monica Lewinsky, he and his family were photographed walking to Marine One with their chocolate lab, Buddy. The book detailing the Clintons’ pets exploits, Dear Socks, Dear Buddy, came out just as the president’s impeachment trial was beginning.

While some sought to argue that dog ownership made voters less likely to vote for then-dogless candidate Barack Obama in his 2008 presidential campaign, research by political scientists Matthew L. Jacobsmeier and Daniel C. Lewis, published in Political Science, refuted this notion. These scholars found that states where dog ownership is most common, concentrated in the South, tend to hold more conservative attitudes. They point out that Obama seemed clearly aware of the advantages that dog ownership could provide—three months into his presidency, Portuguese water dog Bo joined the Obama family. But, these scholars note, it’s unlikely that the canine companion had any impact on the president’s troubles with southern voters in his 2012 re-election campaign.

In just a few short months, the Bidens’ Champ and Major have already made a splash—the president had to assert that Major is “a sweet dog” after he bit a White House staffer. But if history is any guide, we can expect that Major (perhaps with the help of his brother and his humans) will soon become a PR pro.