What is library anxiety? Librarians and experts discuss how technology is changing students’ attitudes toward libraries and librarians. 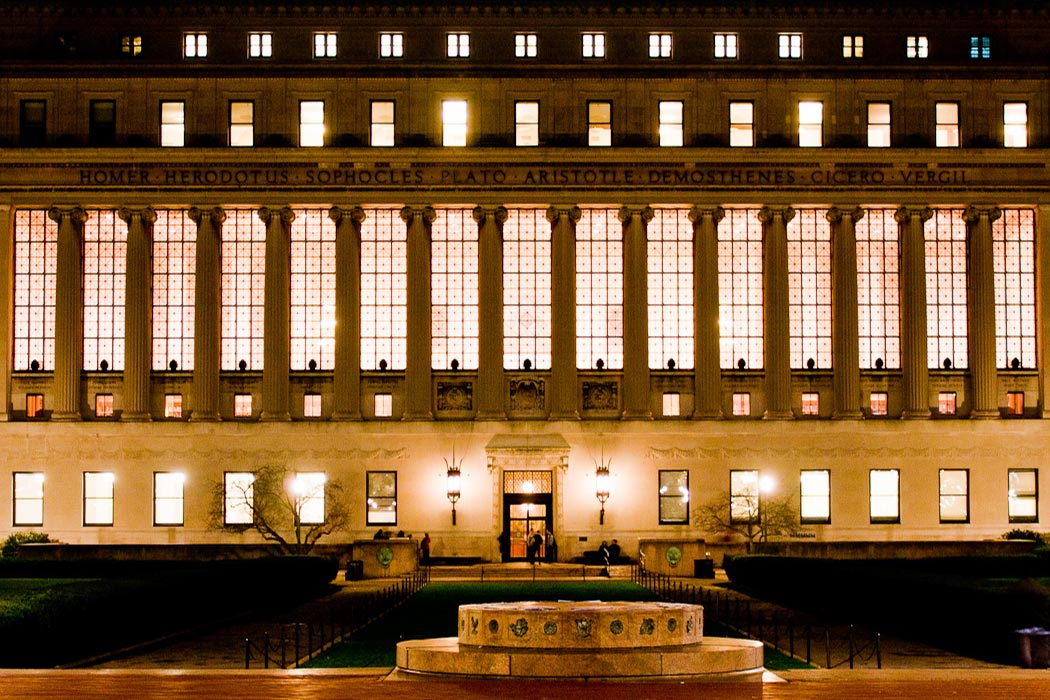 Gillian S. Gremmels still remembers the aha moment she had when, as a reference librarian at DePauw University in Indiana, she first read “Library Anxiety: A Grounded Theory and Its Development” by Constance A. Mellon in the March 1986 issue of College & Research Libraries.

“The resonance I felt when I read about library anxiety was powerful,” she wrote in the same journal nearly 30 years later. “[Y]es, I thought; this is what I’m seeing in my students, who seem overwhelmed by the library, in need of librarians’ help, yet reluctant to approach us.”

That term—library anxiety—is hardly a household name among students, but say it to a college librarian, and he or she will know exactly what you’re talking about. It’s the feeling that one’s research skills are inadequate and that those shortcomings should be hidden. In some students it’s manifested as an outright fear of libraries and the librarians who work there. To many librarians it’s a phenomenon as real as it is perplexing.

“Why would anyone think we are intimidating?” writes Michel C. Atlas. “What is intimidating about a master’s-prepared professional earning $35,000 a year?”

Seventy-five to 85 percent of students in each class described their initial response to the library in terms of fear or anxiety.

Librarians have been discussing the general phenomenon since at least the mid-to-late 1970s, says Ann Campion Riley, president of the Association of College & Research Libraries, but it was Mellon who first gave it a name three decades ago. Her original study was based on analysis of journal entries college students had been required by their instructors to keep during the research process. After reading the student diaries, Mellon concluded, “Seventy-five to 85 percent of students in each class described their initial response to the library in terms of fear or anxiety.”

“Terms like scary, overpowering, lost, helpless, confused, and fear of the unknown appeared over and over again,” Mellon wrote. One student admitted to feeling like a “lost child”; another said she was “lost in there and actually scared to death.”

According to Mellon, three general themes emerged: Students found their own library skills inadequate; they found their perceived shortcomings shameful; they feared seeking out help would only reveal their inadequacy.

The enduring influence of the work is clear. By Gremmels’s published count in 2015, a Web of Science search produced 120 citations, and Google Scholar generated more than 400. Scholars now have insight into how library anxiety affects specific groups of students—first generation, minority, nontraditional age, and LGBT among them—and library anxiety’s impact can even be seen in popular culture, according to Eamon Tewell, who suggests library-based fear is evident in Megan Mullally’s portrayal of the manipulative public librarian Tammy Swanson in the NBC show Parks and Recreation.

So What’s Behind Library Anxiety?

In 1992, Sharon Bostick developed the Library Anxiety Scale, a now copyrighted and statistically validated measurement tool that allows researchers to examine library anxiety and tease out how it affects various demographics. It includes more than 40 statements for students to agree or disagree with, including: I’m embarrassed that I don’t know how to use the library; I am unsure about how to begin my research; I feel like I am bothering the reference librarian if I ask a question.

Bostick, now dean of libraries at the Illinois Institute of Technology in Chicago, says library anxiety is similar to “math anxiety” and “test anxiety” in that all three are state anxieties rather than trait anxieties, meaning the apprehension is situational rather than necessarily linked to a person’s temperament. She says one significant lesson from the research she conducted is understanding the important role played by interactions with people.

“If they were anticipating a positive interaction with a human being, their levels of anxiety statistically were much lower than if they anticipated a bad interaction with a human,” Bostick said in an interview, adding that the same takeaway was true of other elements of the library experience. “Everything else—anything about technology or other components—always had a human component.”

That’s a big part of the reason why librarians have worked hard over the past 30 years to make the experience for students more “customer-service focused,” says Riley, the Association of College & Research Libraries president and acting director of University Libraries at the University of Missouri.

She and other librarians say a big part of this is making sure libraries are welcoming spaces. “Inspirational spaces can also be intimidating spaces, so you want to make them as warm and fuzzy as you can,” Riley said in an interview.

“We have a big reading room [at the University of Missouri]; it’s intended to be an inspiring space, as many historical libraries are, but sometimes people associate [that look] with authoritarian environments.”

Bostick, who consulted on a library renovation and expansion project when she worked at the University of Missouri-Kansas City, says reducing fear can come down to something as simple as layout: “One of the big things is, if you walk into a library, you should immediately see a human there to help you. It’s amazing how many library designs do not allow that.”

In her 1986 article, Constance A. Mellon envisioned library instruction sessions that functioned as “warmth seminars,” opportunities for librarians to establish themselves as friendly, open, and helpful people. It’s a philosophy that’s central today. In addition to informational sessions for students, library tours, ask-a-librarian tools, and the placement of younger, more approachable graduate students at the reference desk, librarians have also teamed up with instructors to better integrate themselves into courses. It’s an important factor considering research has shown a connection between library use and encouragement from professors.

“I think you partner together,” says Sarah Naomi Campbell, a reference librarian at Johnson & Wales University in Providence, Rhode Island. “I reach out to faculty; we spend time together; I’m sometimes involved in course design.”

Campbell says a personal touch can go a long way in helping students, including ones who may have unique anxieties about being in a library, whether it be a first-generation, black, or LGBT student. Campbell, who identifies as being on the trans spectrum, says transgender and other LGBT students sometimes have apprehensions about even checking out a book on a topic that interests them.

“They may not be out, or there may be reasons why it’s not safe, or they’re not comfortable,” Campbell says. “I definitely have identified with feeling anxious about divulging research topics that I’m working on, or just personal—maybe a fantasy novel with a queer character. Little anxieties can really prevent you from engaging in the process.”

It’s hard to deny that American colleges are far different places today than they were 30 years ago, and that probably means something for the way we look at library anxiety.

“Perhaps the situation is complicated in ways that Mellon could not have foreseen in 1986, by a much more diverse student body and a much more complex information universe,” writes Gillian S. Gremmels, citing one academic who “has warned that stereotype threat [being at risk of confirming a negative group stereotype] influences the choices students of color make when considering approaching a librarian; welcoming and friendly behavior from a librarian may not be perceived as intended.”

In addition to more diverse student bodies, librarians need to take into account the prevalence and variety of online research options—reliable and unreliable—in today’s digital age. Digital resources are credited with helping more people receive a college education through distance learning as well as reducing traditional library anxiety. But there is also a concern that the abundance of information available over the Internet has brought with it entirely new challenges.

“Part of the problem that this presents for instruction librarians is the reluctance [of] students to participate in library instruction sessions or to come to librarians for help because they feel that they know all of this,” she says.

This affects not only their ability to access information but also to evaluate it. As part of an instructional session on identifying and weeding out illegitimate or biased sources, Consolatore uses an exercise where she asks her students to look at a site dedicated to the civil rights hero Martin Luther King, Jr. What she doesn’t tell them is that a group affiliated with the white supremacist David Duke created it.

“It looks like a professional website,” she says. “And all of the information on there is false, but students tend to take it at face value. They see something that looks good, and so they think that information is good information.”

These days, a new threat to academic research may be students’ lack of understanding about the value of libraries, rather than anxiety about librarians.

These days, a new threat to academic research may be students’ lack of understanding about the value of libraries, rather than anxiety about librarians. “[A] new qualitative project has yielded another surprise: Students in this study weren’t intimidated by librarians or reluctant to lose face by approaching them; they simply had no idea why the librarians were there and what they were for,” Gremmels writes. “Are we labeling as library anxiety phenomena that would more accurately be described as library ignorance or library indifference?”

That fact can be particularly concerning when considering the demonstrated benefits of physically stepping into the college library. “We have research that shows [students] do benefit significantly by using the library,” says Riley, citing GPA performance and levels of institutional engagement as indicators. “Plus, we love to just generate that love of learning. So, obviously, I think it’s better if they come to the library.”

So where does this all leave the student who’s still fearful of making that first approach to the reference desk? Librarian Michel C. Atlas has some age-old, conventional wisdom to offer: “[T]he bottom line on library anxiety—just get over it!” 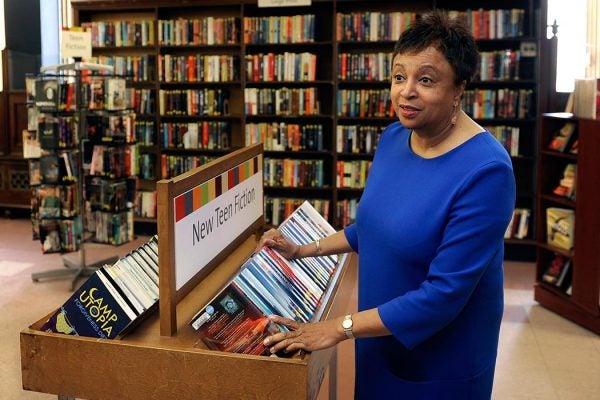 Carla Hayden has a history of social justice work in public libraries.