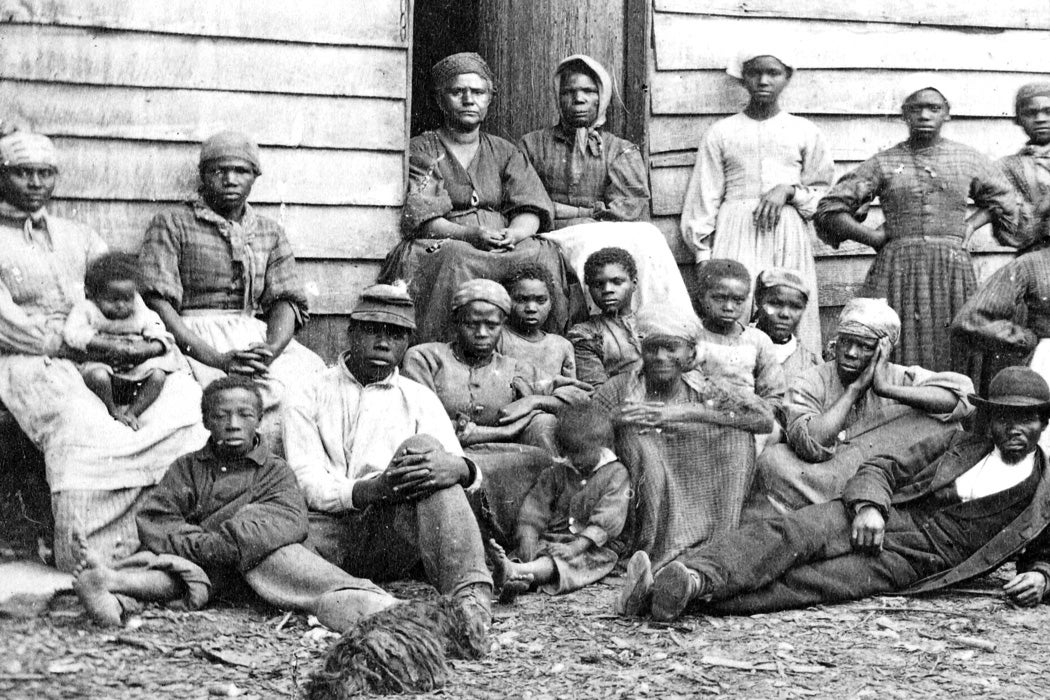 A group of slaves gathered outside a building at the Foller Plantation in Cumberland Landing, Pamunkey Run, Virginia, May, 1862
via Flickr
By: Livia Gershon
3 minutes
Share Tweet Email Print

United States history textbooks have long portrayed the Civil War as a clash between two armies of white soldiers, with the black enslaved people playing a passive role at the center of the drama. Political scientist Errol A. Henderson writes about a different interpretation, which gives full credit to enslaved workers whose rebellion was key to winning the war for the North.

Henderson notes that the first widely discussed description of a “general strike” by enslaved workers came from black sociologist W.E.B. Du Bois in the 1930s. Du Bois wrote that, as Union forces marched through the South, enslaved laborers escaped plantations, presenting themselves at army camps to join the fight.

“It was this revolt of the slaves and the prospect of a much larger movement among the 4,000,000 other slaves, which was the real cause of the sudden cessation of the war,” Du Bois wrote.

Du Bois noted that the black rebellion bolstered Union fighting forces, which needed reinforcement as draft riots swept the North. The rebellions also promised to wreak havoc on the wartime economy in the South by withdrawing a huge amount of labor.

While Du Bois’s argument was widely dismissed in his own time, Henderson writes that many historians today support it. For example, he notes that Stephanie McCurry compares the rebellion of enslaved people during the Civil War to the Haitian revolution. She points out that, during the war, both Union and Confederate officials described revolt by enslaved people and that “all called it what it was: a slave rebellion” In the years that followed, historians “shied away from any description of the Civil War as a slave rebellion” not because it was inaccurate but because of that interpretation’s “explosive politics” at a time when national leaders were trying to tamp down black activism and reunify whites in the North and South.

To see how enslaved people were able to coordinate a general strike, Henderson looks at conditions in the southern economy in the years before the war. He notes that many enslaved workers were not isolated on plantations but employed in growing industrial operations. Some, particularly skilled artisans, were “hired out,” working in a manner similar to wage workers, but without pay. Henderson writes that this practice radicalized workers by making it obvious how much value they were creating without compensation. It also gave enslaved artisans a chance to meet and discuss their grievances together. These artisans, along with preachers and other enslaved workers who traveled as part of their jobs, formed a nexus for mobilization.

In fact, Henderson argues, this was the pattern in many rebellions by enslaved people that occurred in the decades before the Civil War. At religious meetings, conspirators gained tactical information as well as spiritual fuel to undertake incredibly dangerous revolts. Networks of enslaved artisans and other mobile enslaved workers spread intelligence and made plans to rebel.

Given that background, Henderson writes, it only stands to reason that enslaved people were able to spread the word of the Union’s movement through the South and make plans to join the soldiers as crucial allies.

Slave Religion, Slave Hiring, and the Incipient Proletarianization of Enslaved Black Labor: Developing Du Bois' Thesis on Black Participation in the Civil War as a Revolution
By: Errol A. Henderson
Journal of African American Studies, Vol. 19, No. 2 (June 2015), pp. 192-213
Springer