We didn’t know we loved to binge until Netflix made it irresistible. To understand the new model, we should look back to Theodor Adorno. 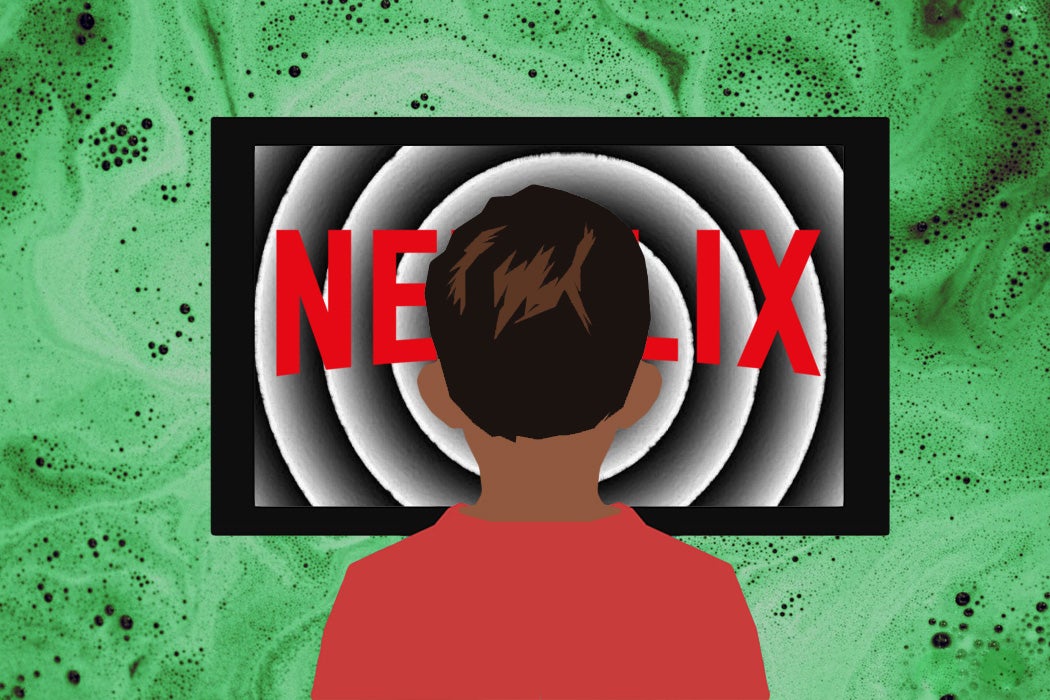 Bleary-eyed and snug under the covers, I end most nights in bed with my laptop propped on my lap as I squeeze in one more episode of Russian Doll. I binge, you binge, we all binge. But at this point, six years after Netflix began releasing full seasons of original television content all at once, what have we really learned about the binge watch? Experts researching our modern viewing practices have focused on the “flow” of streaming and how these design choices have helped bring us to the binge model, and on the (not unassociated) consequences of the algorithmic control these platforms have over our habits of consumption. The roots of these practices, though, lie further back than the arrival of streaming.

In a 1954 article for The Quarterly of Film, Radio and Television called “How to Look at Television,” Theodor W. Adorno wrote about his concerns over how little was understood about how television worked, and the dangers it posed:

By exposing the socio-psychological implications and mechanisms of television, often operating under the guise of fake realism, not only may the shows be improved, but, more important possibly, the public at large may be sensitized to the nefarious effect of some of these mechanisms.

While his focus is largely on the “imagery” of television and its attendant morality, Adorno presciently points out how significant the mechanisms of television would be to its reception and uses as an artistic medium, and the ways in which the audience would take on ever more importance in evaluating television and its cultural impact. These “mechanisms” are the specifics of how the medium works, the means television producers employ to keep viewers glued to the screen.

Scholars and consumers alike will put pressure on any new medium to account for what differentiates it from others. But this process takes place alongside a struggle to understand how the medium works and what effects it has on us. When the cinema came along, we wondered what it meant to attach images together sequentially, and later, with the release of home television sets, what it meant for an audiovisual machine to become a mass medium. More recently, video games have been subjected to the same lines of inquiry, with an emphasis on the effects of interactive play.

The media and communications scholar Arthur Asa Berger, writing in the Journal of the University Film Association in 1978, quotes the academic George Gerbner, who was speaking in testimony to the National Commission on the Causes and Prevention of Violence in 1968:

In only two decades of massive national experience television has transformed the political life of the nation, has changed the daily habits of our people, has molded the style of the generation, made overnight global phenomena of local happenings, redirected the flow of information and values from traditional channels into centralized networks reaching into every home. In other words, it has profoundly affected what we call the process of socialization, the process by which members of our species become human.

In the streaming age, we should remember this historical context. With the modern binge model of consumption, these concerns have intensified and evolved. The concept of television “flow” is not new, traditionally describing the strategies networks have used to keep viewers glued to their screens from program to program. The Marxist theorist Raymond Williams called it “the defining characteristic of broadcasting, simultaneously as a technology and as a cultural form.”

Television, in many cases, creates the very dependencies we use it to overcome.

Television’s traditional linearity has been upended via home video, on-demand, and most significantly, streaming, with a greater emphasis put on “viewer choice,” such as it is. James Bennett, writing in Cinema Journal in 2008, said:

Television studies should pay close scrutiny to both the interfaces and applications that structure our access to “television” content and manage user flows, as well as the discourses and aesthetics of such content/programming itself.

Netflix, Hulu, Amazon, and the rest are deeply invested in these structures (each interface may look similar, but works according to distinct inner logics) and in creating the ideal consumer flow, intended to keep us watching for as long as possible. Berger commented: “Television, in many cases, creates the very dependencies we use it to overcome, so we become caught in a vicious cycle.” Watching television might soothe or entertain us, but the shows are written to draw us back in.

These moralistic (and vaguely health-related) worries over watching too much TV have existed since TV became available to regular families, and the contemporary binging affliction seems like a hyper-indulgent progression. It’s built around different systems, with better technology (you’ll probably notice Netflix introducing you to shows via a “Binge-worthy Shows For You” segment on your home page).

We’re also more aware than ever before of the 24-hour news cycle, with folks now claiming to binge-watch CNN, MSNBC, or Fox News. In an article from Spring 1984 in The Public Opinion Quarterly called “Political Correlates of Television Viewing,” the authors claimed that “television’s impact on the political front is not limited to news and specifically ‘political’ programming, but that the entire dramatic structure of network television may contribute to viewers’ underlying political orientations.” Interestingly, they claim that those who watch the most news and political programming tend to identify as moderates. Without an updated version of the study, I’d wager that the accelerated style of our news cycle and the drive to maintain eyeballs, along with many other factors, suggest that the opposite is now true, and we’re stuck in the muck of hyper-polarization partly as a result of these dramatic structures of network news television.

Compounded by the relative skill of platform algorithms, this all feeds into bingeable TV lives of personalization, each viewer experiencing their own individualized interface and consuming their own niche segment of the culture. A friend may tell you about their favorite show that’s popular now on Netflix, but if it’s not “on brand for you,” you likely haven’t even seen it appear in your app. Nothing is dominant anymore within a medium that was once thought of as the ultimate mass medium, or what the geographer Paul C. Adams in 1992 called “television as gathering place.”

Netflix tells us at every moment how to watch it.

With all this in mind, the nine critical propositions on binge-watching put forward by Tanya Horeck, Mareike Jenner, and Tina Kendall in a recent issue of Critical Studies in Television offer an instructive account of the unprecedented changes in viewer behavior we’ve seen in recent years. What we consider to be “bingeing” changes—it’s not just about the number of episodes you watch; it’s about the choice of a single show. Netflix’s full TV season drops have created an insular flow: “Rather than going back to the home page and making a deliberate choice… the post-play function takes us directly to the next episode. The ‘skip intro’ function even allows us to make the narrative flow feel more seamless.” Netflix tells us at every moment how to watch it.

The authors offer some directives for further work. One of these is to question the extent to which binge-watching has impacted biopolitical production. In its advertising campaigns, Netflix has made light of how sleep and the necessity to eat or leave your apartment can get in the way of your binge. Horeck and colleagues point out how this colonization of sleep is a core tenet of the company’s business model. Netflix’s CEO in 2017: “We’re competing with sleep.”

Not unrelated, I think, is their proposition regarding low-intensity consumption. Much of the binge discourse has been about the high-intensity versions—long nights, deeply felt fandom. Concurrent with those practices is the opportunity to zone out through consumption: “in a binge culture, the banal pleasures of zoning out coexist with—and play an increasingly strategic role in maintaining—the intensive pleasures of switched-on viewing.” This complicates our immediate notion of what it is to binge by bringing attention to how Netflix and other services recreate and rearticulate the televisual experience. Nodding to the medium’s history of being left on as background noise, these low-intensity binges are a natural outgrowth of the auto-play function and the easy-to-digest content Netflix in particular is increasingly producing: cheap reality shows, cooking bonanzas, stand-up specials, and a wealth of assorted documentary content.

These authors also suggest that we consider how bingeing repurposes gender and racial dynamics, often via well-worn tropes. Netflix’s role as a transnational broadcaster (everyone around the world can watch and discuss after a series drops), and the binge model’s role in “shaping viewing protocols in relation to a wider media ecosystem concerned with the generation of ‘clicks, likes and shares’” are all worthy pursuits. But what becomes clear is that bingeing in the streaming age is, right now, transforming how we watch, and we need to be aware of these changes and watchful of their consequences. As the media scholar Elana Levine wrote for Cinema Journal in 2011:

The medium need not speak in a single voice to be a factor in the exercise of dominant interests, nor do its audiences need to engage in a single experience of television to make their negotiations with it central to current social, cultural, and political debates.

Television and its flows remain hugely influential. We can’t just let ourselves binge.