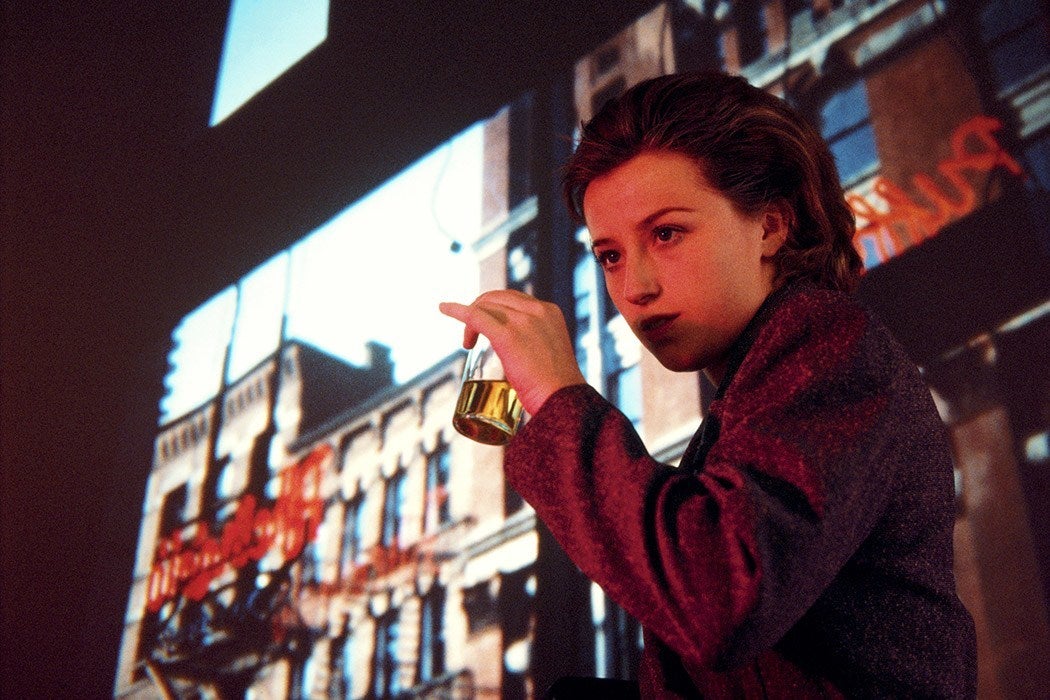 Los Angeles’ Broad Museum launches its first special exhibition this month, featuring a survey of American photographer Cindy Sherman’s work. In “Imitation of Life,” curator Philipp Kaiser presents viewers with a comprehensive collection of Sherman’s photography. Using herself as the model in most all of her photographs, Cindy Sherman plays with female identity as presented in the media, fashion, films, and her own imagination.

“I wanted the story to come from the face. Somehow the acting just happened.”

In our selfie-obsessed world, a career’s worth of untitled self-portraiture might not seem that monumental, but Sherman began working back in the late 70’s. Her self-portraits have influenced not only the discipline of photography as a whole, but also the fields of women’s studies and art history; she has irrevocably affected the way we visually analyze and deconstruct the female representation in American media.

Betsy Sussler interviewed Sherman in 1985, exploring her artistic process, motivations, and goals. As Sussler summarizes, Sherman’s photography moved from “mimicry” of films from the 50’s and 60’s in her untitled film stills, to lone photographs with Sherman mugging emotively for the camera without the distraction or pretense of props, to her more flamboyant and over-the-top fashion series.

Sussler asks how Sherman decided to star in her own photographs, inquiring whether she considered it acting. Sherman responds:

I never thought I was acting. When I became involved with close-ups I needed more information in the expression. I couldn’t depend on background or atmosphere. I wanted the story to come from the face. Somehow the acting just happened.

Sussler follows up, asking, “Now when you’re doing it, what are you thinking?” Sherman responds, “I think of becoming a different person.” And through her photography, Sherman certainly does “become” other people—over the past five decades, she has portrayed hundreds of different imagined female characters, ranging from film stars to flamboyant fashionistas to satirical and theatrical pinups.

Asked whether she decides what she wants to become before she shoots, Sherman explains:

I recognize it when I see something I don’t recognize. I’ll do test pictures, maybe a whole roll of film that all looks familiar…When I see what I want, my intuition takes over—both in the “acting” and in the editing. Seeing the other person that’s up there that’s what I want. It’s like magic.

Experimenting with different methods over the years, she embraced technological changes moving from her early chromogenic prints to digital photography. In an essay co-written with David Goldsmith, Sherman discusses both her technical and social motivations for her work:

I’ve had to learn more and more techniques. I’ve never felt while I was creating a series that I was limited by my technique, but afterward I have seen that I wanted to create something that I couldn’t. So the next series might be partly about solving those technical problems as well as a political agenda or the lack of a political agenda.

Using a medium that was once assumed to capture reality, Sherman’s photography instead creates a facade, prodding us to question not only what we are seeing, but also the very constructs that are present in our everyday lives. Her work seems more relevant than ever, in our media-saturated world—after all, now we are all in the business of photographing the different versions of ourselves.

Here is your Friday Five: Five new books out this week, and links to related content you won't find anywhere else. Ghanaian-American writer Yaa Gyasi’s firs