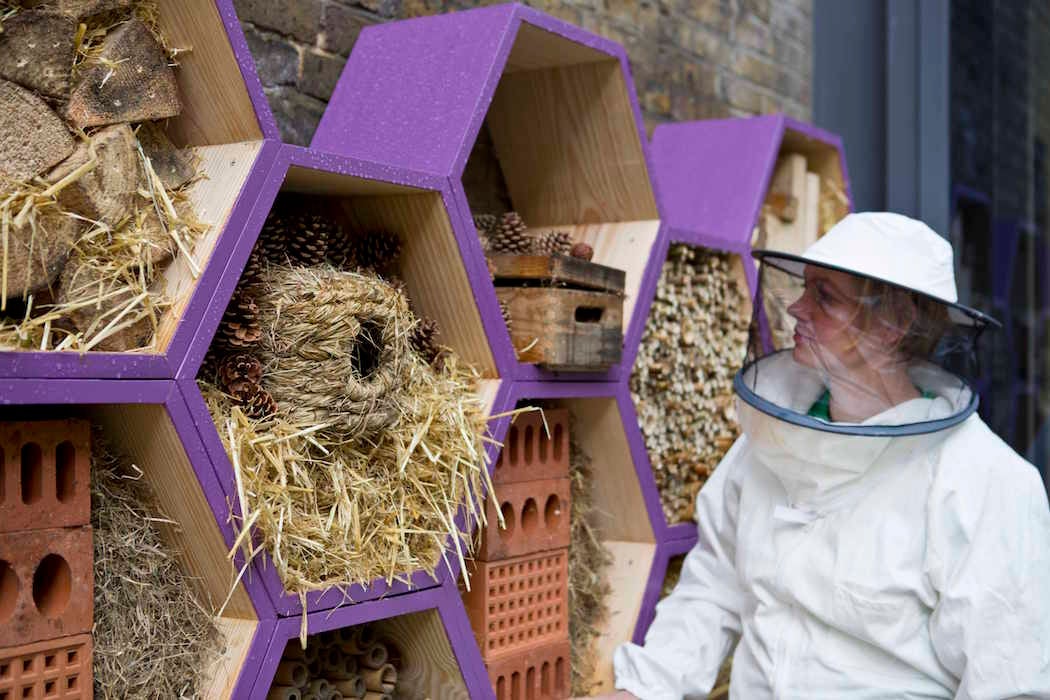 This spring, London’s St. Ermin’s Hotel will be buzzing. Not just because it’s minutes away from Buckingham Palace and the Houses of Parliament, but thanks to the six beehives installed on its roof. The bees pollinate the apple and pear trees growing in the hotel rooftop garden and greenhouse. They also forage in other places—in the Buckingham Palace gardens, Hyde Park, and other blooming squares around the city, two to three miles away.

Fueled by the colony collapse disorder that affected bees around the globe, there’s been a worldwide rise in urban beekeeping. According to a recent article, New York City now houses 373 beehives and has a beekeeper meetup with more than 2,000 members. In Melbourne, one beekeeper maintains around 40 hives, which support his urban honey business. He transports his hives around the city on his bike and sells all his honey locally, within the bees’ flying range.

Some city apiarists insist that in certain places urban bees are better off than their country brethren.

As the trend has been catching on, more people have been turning to urban beekeeping to pollinate their gardens (and to enjoy the honey). But now hotels and other institutions—particularly those with ample roof spaces and gardens—are jumping on the bandwagon. St. Ermin’s installed what it calls London’s first “Bee & Bee” hotel on its third floor terrace—a multi-hive arrangement that hosts more than 350,000 Buckfast honeybees. The local beekeeper, Camilla Goddard of Capital Bee, maintains the hives and teaches classes on how to set up and manage a colony. “The St. Ermin’s six active hives are doing well,” says Goddard, thanks to the “fantastic range of flora in the surrounding royal gardens and parks.”

Goddard has a point—the nearby royal gardens offer a rich and healthy food supply for the bees. In fact, some city apiarists insist that in certain places urban bees are better off than their country brethren. They think that city bees may have better food choices than those living around large-scale commercial farms. Because industrial farming favors monoculture crops, country bees have a limited amount of food choices, which negatively affects their immune systems. In metropolitan areas, the variety of flowering plants and trees is greater and richer—and so is the bees’ diet.

In a recent study, Katherine Baldock, a researcher at the University of Bristol, and her team found that urban areas can indeed serve as safe havens for a variety of bee species. This is particularly true in the UK metropolises, where gardens occupy a quarter to a third of the cities’ land. These areas can act as important refuges and food corridors among the “hostile matrix habitat, such as intensive agricultural landscapes.” In that sense, the Bee & Bee Hotel lives up to its name: providing food and shelter not only for its own pollinators, but also for transient ones that fly in from other places, as well as for solitary bees.

In their new study, the Bristol team notes that urban gardeners can maximize the nutritional benefits for bees by planting their favorite food sources, such as lavender, borage, dandelions, thistles, brambles, and buttercups. The gardeners also can prolong and preserve flower blooms by mowing their lawns less often.

In the future, cities will expand, and so will their agricultural demands on land, both for food and biofuel production. That means that the “bee-friendly” divide between the city and country will only intensify, researchers note. The farms will likely further specialize in monoculture production, while the cities will expand and acquire more land, some of which could be used to plant more varied flora and house more bees. “Urban areas are growing, and improving their value for pollinators should be part of any national strategy to conserve and restore pollinators,” the authors write.

Bee aficionados are taking note. Goddard will be teaching more workshops at the Bee & Bee hotel this summer, delving into the relationships between pollinators and flowers and the complexities of bee societies. Clad in protective suits and gloves, the workshop participants will also learn how to collect the raw honey. The busy bees produce about 25 pounds of honey a year, and according to the hotel’s head chef, not a drop is wasted.