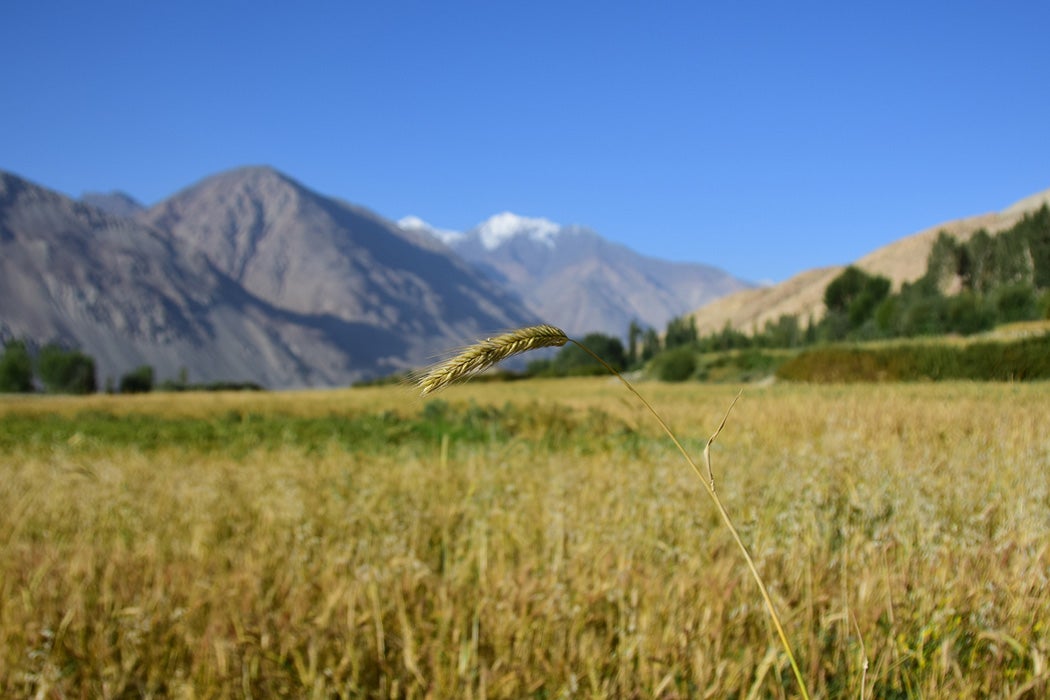 The war in Ukraine has sparked concern from many places that depend on that nation’s wheat crops. Wheat isn’t just a staple food—in many places, it’s central to cultural identities. As social sciences scholar Jeanine Dağyeli writes, it has been an important part of the ritual life of Central Asians for centuries.

Drawing on Soviet-era ethnographies, Dağyeli describes the wheat cycle in the late nineteenth and early twentieth centuries in the mountains of Tajikistan, in which religious ritual was an inextricable part of agricultural work.

Central to these accounts is Bobo-yi Dehqon, a supernatural being who guards the growing of cereals. He’s sometimes depicted as a mix of a unicorn and bull who descended to Earth at spring equinox and used his horn to show people how to make a furrow. Dağyeli indicates that the origins of the entity are probably pre-Islamic, and Bobo-yi Dehqon may have begun his existence as a local king-god.

On the morning of Navruz, oxen were offered a greeting, invited into homes, and offered human food—usually a flatbread or deep-fried dough balls.

Traditionally, Dağyeli writes, the growing season began on New Year’s Day, or Navruz, which technically fell on the vernal equinox but in practice varied depending on local signs like the melting of snow. The month before was a liminal period during which the usual rules of hospitality were reversed and visitors from outside the village were unwelcome.

In preparation for Navruz, men left their homes while women cleaned with brooms sprinkled with wheat flour and made kochī, a type of porridge made with flour, butter, and milk. The preparation of the dish was done early in the morning, exclusively by women in a festive atmosphere with music and entertainment.

Dağyeli writes that the rituals of the growing season itself were overseen by a wealthy and elderly but healthy farmer. In addition to representing the spirit of Bobo-yi Dehqon, the farmer was responsible for a number of expenses, including food shared at the mosque. On the morning of Navruz, oxen were offered a greeting, invited into homes, and offered human food—usually a flatbread or deep-fried dough balls. The wife of the man designated as Bobo-yi Dehqon rubbed their horns with fat, and then a flatbread was spiked on each horn. More preparations followed, culminating in a ceremonial first plowing. Anyone who began plowing their field prematurely might have their plow seized and burned by the mosque.

After the ceremonial plowing and first sowing, women joined the activities, carrying with them a sprouted-wheat pudding called sumalak. When the men and boys returned from the field, they ate some of the kochī porridge that had been prepared earlier while the women consumed only sumalak. “The two ritual foods, kochī (prepared from flour of the last harvest) and sumalak (prepared from fresh wheat sprouts), at the same time represent the male and female spheres of the ritual,” explains Dağyeli.

At the end of the growing season, once the harvest was complete, a portion known as “the share of Bobo-yi Dehqon” was set aside to be distributed to beggars.

Soviet policies and mechanization of agriculture eventually curtailed some ritual aspects of wheat-growing, but the grain remained an object of some reverence in the region. Even today, if someone drops a piece of bread on the ground, the respectful thing to do is pick it up, kiss it, and put it back on the table. Spoiled bread is not to be disposed of in the trash but should be left out for birds or other animals.

“A meal without bread is not a proper meal, and some Central Asians I know would rather not eat soup at all if there were no bread with it,” Dağyeli writes.